You can't make this stuff up 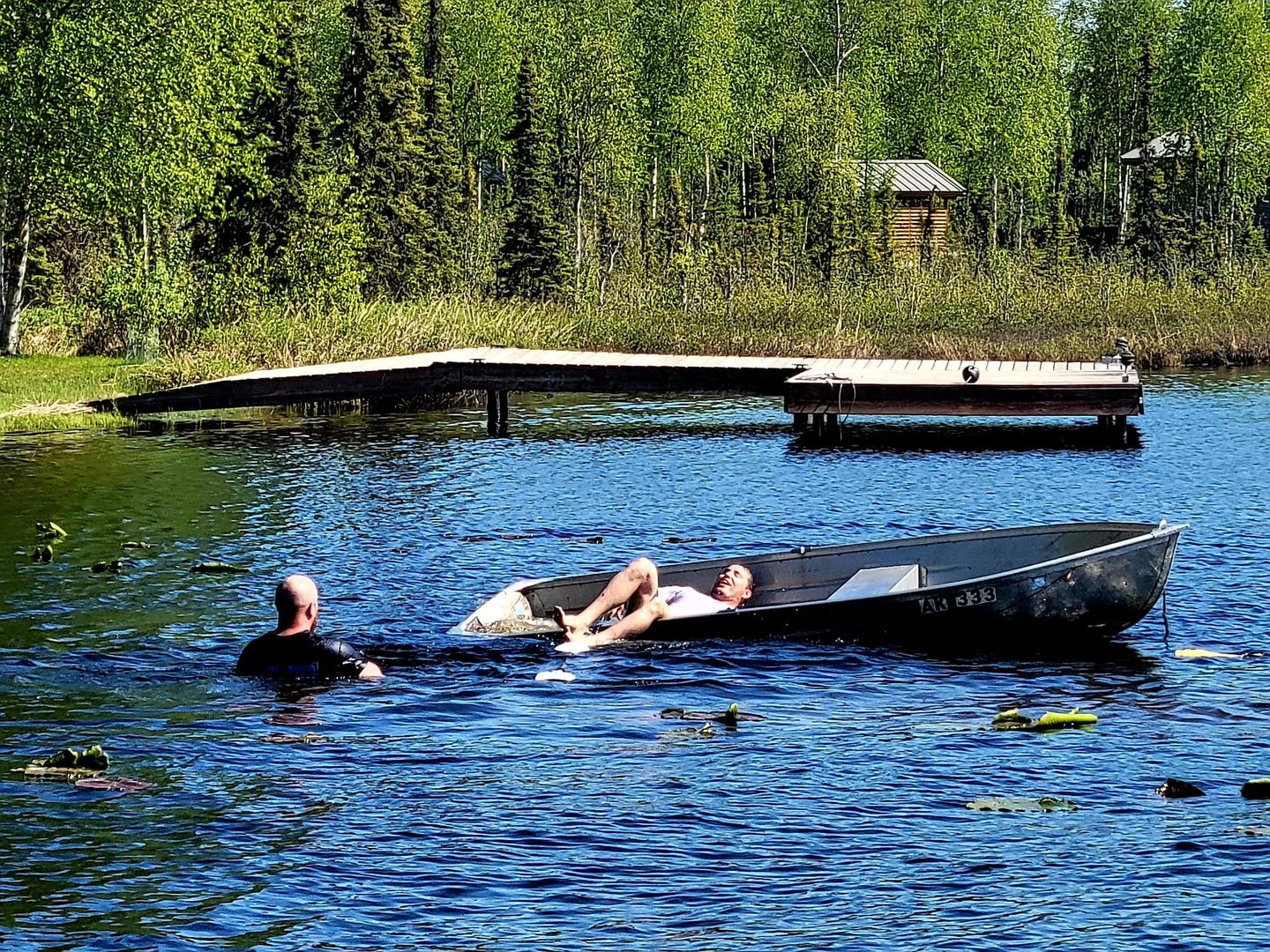 When a quick fishing trip turns into a swimming expedition. Breanna Bartell
SHARE

When Sam Bartell looked over to see his buddy Tomee Jones in the bottom of the rowboat—his ankles up high over his head—he should have known things were about to take a turn.

Bartell, who had a 30-plus-inch pike on the line, thought for a moment that he could keep the boat right-side-up. But as the water came over the gunnel and he fell backward into the lake, losing his doubled-over rod in the process, he knew for sure that their relaxing day of pike fishing had just turned into a goat rope.

The episode all began when Bartell spotted a monster pike swimming near the dock. It was the Saturday of Memorial Day weekend, and the two buddies were with a group of friends at a house on Hourglass Lake near Wasilla, Alaska. They weren’t exactly prepared for an outing on the water, but noticing an old rowboat on the shore, Bartell figured they might as well give it a shot.

“We’re super fired up at that point, and I’m like, ‘Let’s grab this crappy boat and let’s go,’” he tells Outdoor Life.

The two worked up and down the shoreline without a bite, he explains, but when they came back around and passed within 20 yards of the dock, a bruiser of a pike exploded on his orange rooster tail.

“This is the biggest pike I’ve ever seen!” Bartell yelled as he set the hook, unable to contain his excitement.

This caught everyone’s attention on the dock—including Bartell’s wife, who had already started taking pictures. Jones, meanwhile, tried turning around in the bow before suddenly finding himself in the awkward position of looking up at his sandals. Then…kersplash.

The next thing Bartell knew, he was treading water empty-handed while Jones climbed into the swamped rowboat. The rod had slipped out of his hands.

“Tomee was kind of freaking out,” Bartell says. “He was really worried about the huge pike thrashing around underneath him. But once he was all good, I looked back at the dock and all the women were just laughing at us.”

So, the two anglers pulled the swamped rowboat back to shore and sat down on the dock for a breather. After about 10 minutes, though, Bartell still couldn’t get the fish out of his head. That’s when he saw the pedal boat tied up to the dock. And after commandeering the toy craft from the young kids who were there, the two set out again, pedaling the awkward barge to the same spot where they had dumped their first boat.

It wasn’t long before Jones somehow spotted the rod at the bottom of the lake in about seven feet of water. Bartell had already taken one unplanned swim and had nothing to lose, so he went in after it. Diving down and grabbing hold of the rod, he felt the telltale tug of a fish.

“And I’m like, ‘Dude! This thing is still on here,” Bartell says.

Back in the pedal boat, the two stayed tight to the pike and towed it back to dock. With the fish finally in-hand, Jones ran up to the house to grab a piece of firewood to use as a club.

After filleting the 32-inch fish, the two sopping wet fishermen kicked back on the dock once again to recover from a relaxing afternoon of pike swimming.