Why You Should Never Stop Shooting BB Guns, Pellet Rifles, and .22s 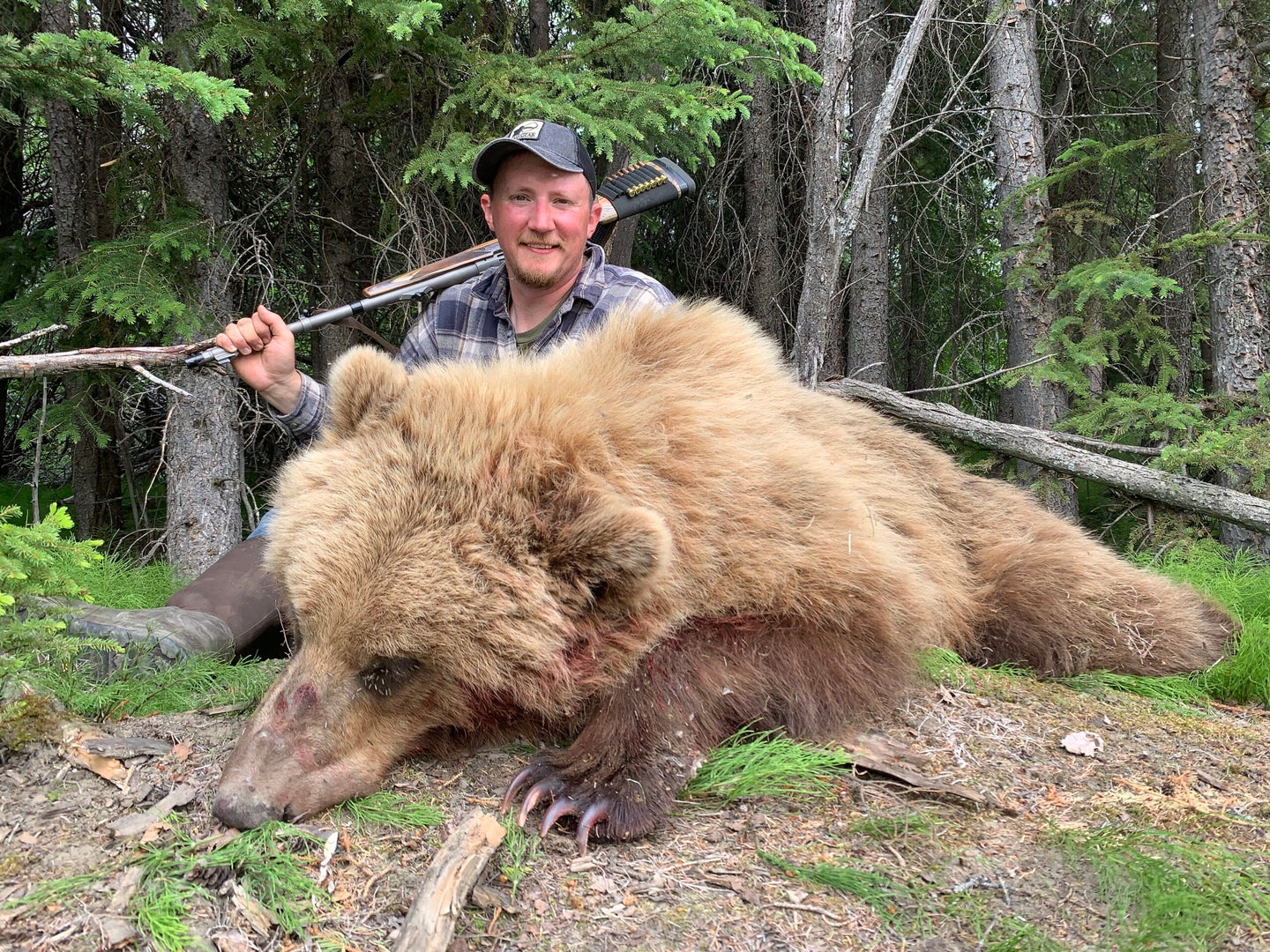 The author with the grizzy he shot running towards him at 15 yards. Tyler Freel
SHARE

The ringing in my ears drowned out the soft evening songs of the thrushes as I sat on the riverbank. Sweet smoke from a cigar wafted in the calm, sticky air, keeping a cloud of mosquitos at bay. As my nerves began to settle, and the ringing slowly faded, I got up and went back into the woods to retrieve the bear I’d just killed.

The bear—a sow grizzly—had been standing at my bait site as I made my way through the woods to check it in preparation for an all-night sit. I’d made plenty of noise pulling up in the boat and snapped a few sticks on the trail, but somehow it didn’t alert her. I always approach a bait carefully, and I froze when I spotted her blonde fur through the spruce trees. Watching for half a minute or so, I could see she was a mature sow with no cubs (a legal bear) but she wasn’t the kind of bear I was looking for. Plus, I wanted to bow hunt.

I have had bad experiences with frightening grizzly bears at close range on the ground, so I made a quiet noise to make her aware of my presence and spook her away. In the seconds that followed, things slowed down. Her head snapped up, and she reacted instantly, running toward me. It wasn’t a charge as much as it was an investigative lope. She couldn’t see or smell me. She burst through a line of white spruce trees at 15 yards, and when she cleared them, a 250-grain Hornady Interlock from my .338 Win. Mag. caught her square in the chest, sending her veering off to my left.

The concussion from the 20-inch barrel of my guide gun had barely echoed back from the trees before the spent case was spinning through the air. I swung on the bear as she ran behind a screen of trees, scanning ahead for the first opening—which she rolled into. I fired again at the first clear sight of brown and ejected another. I quickly topped off my magazine as the bear lay still—but it was over.

By now you might be wondering what in the hell shooting a half-charging grizzly has to do with shooting BB guns and .22’s, and the answer is nothing—and everything.

A Foundation of Repetition

Many experienced hunters consider BB guns, pellet rifles, and .22 rifles to be kids’ guns—and for understandable reasons. Most people who begin learning to shoot as children start on a BB gun, then graduate to a .22 rifle, and somewhere along the way pellet guns are mixed in. I remember being turned loose with a Daisy lever-action BB gun at about six years old, and eventually I got one of the Daisy Powerline rifles that could shoot BB’s or pellets, and if I really needed some juice, I would give it a full ten pumps. I vividly remember the first time I got to shoot my dad’s 22, and old Ithaca model 72 he got before I was born.

Air rifles and .22’s are easy to shoot and can be safely fired in many places that larger-caliber rifles can’t. They are all great options for a budding shooter because they have essentially no recoil, and shooters can get a lot of repetition.

Practicing and learning good shooting fundamentals is very important, but so is repetition. A common thread among many crack-shot woodsmen is burning through bricks of .22 LR ammo and carton after carton of BB’s in their childhood. Pair good fundamentals with thousands and thousands of trigger pulls, and that practice will pay off for a lifetime.

Just because you are an adult doesn’t mean that this principle of repetition isn’t important for you, too. You don’t have to shoot a hunting rifle to gain valuable repetition, and even fighting the gummy trigger on an adult-sized Red Ryder for a few cartons of BB’s will absolutely make you a better shooter. However you must focus on fundamentals like breathing, sight picture, and trigger squeeze. The gun doesn’t need to be a tack driver, it’s your own skills that you’re working on.

Repetition is critical to keeping your shooting skills sharp, but it can be tough to shoot on a regular basis—especially with your high-power hunting rifles. It’s not that they aren’t fun, but it often involves a trip to the range and time to gather up everything you need—all for relatively limited rounds fired. Plus, ammo for many hunting cartridges is still hard to find (or it’s very expensive) these days.

Not only are BB guns, pellet rifles, and .22’s easier to shoot in greater volume, they’re a hell of a lot of fun. When the fun-to-work factor is high, you’re more likely to get valuable repetition in your shooting.

BB and pellet rifles can be an incredible amount of fun, even for adults. I spent hours and hours shooting as a kid. Although my son started shooting at 3-years-old with a single-shot .22 topped with a red dot, I recently bought him the famous Red Ryder (he’s 6 now). We set up a simple range in the back yard with aluminum cans hanging by strings, and as long as firearm safety rules are being followed, imagination is his only limit. Shortly after getting it, he was blazing away at his shooting gallery of cans—coonskin cap and all—when I walked up and asked, “How ya shooting Tex?”

“You can call me Red,” he replied.

I’d be lying if I said I didn’t occasionally swipe his “blued steel beauty” and make the cans dance myself.

When it comes to fun targets, .22’s have it made. There are tons of reactive targets designed for rimfire cartridges that provide hours of entertainment, and genuinely fun shooting. I recently picked up a few of the Birchwood Casey Spoiler Alert targets, and I love them. They are designed to be pushed into the ground and have support rods that won’t tip over, and the target face is a 6-inch steel plate that’s backed by a square steel plate. When you hit the center with a .22 LR, the plates clang together to give you unmistakable feedback. They’re fun up close, or to set out at longer ranges. Trying to hit them at 150 or 200 yards with your .22 is a fun challenge.

There are scores of other targets you can get, including dueling trees, spinners, and plate racks—all designed to be fun. Each shot you fire should have purpose. But if shooting is fun and easy, you’re going to get a lot more practice.

The biggest fundamental benefit to shooting BB guns and rimfires—even as adults—is the lack of blast and recoil. Recoil is something that shooters can (and should) eventually get used to and learn how to deal with. I’m not a fan of muzzle brakes in the context of hunting or stopping rifles, and I think that you should generally hunt with something you can shoot without a brake. I think that unprotected muzzle blast can have similar shot-anticipation effects on a shooter, in addition to potential hearing loss. However, it’s simply a fact that people will generally shoot better with lower-recoiling rifles.

The fact that shooters shoot better without recoil doesn’t mean that you can’t shoot well with heavy-recoiling rifles—but it’s still important to practice with guns that don’t kick. Flinching in anticipation of recoil is nothing new. Jack O’Connor wrote on the subject many times and sang the praises of light-recoiling cartridges as being easier to shoot accurately. His successor here at Outdoor Life—Jim Carmichel—also wrote about the negative side of hard-kicking cartridges. For many shooters, a flinch or other shot-anticipating movement is developed by getting pounded over time. It’s not about just being tough either. Your brain doesn’t like your body getting the snot knocked out of it every time your finger presses the bang switch, so it starts taking subconscious action whether you want it to or not. Practicing frequently with rifles that don’t induce that reaction will help keep you sharp.

You might never find yourself staring down a grizzly bear, but if you hunt, you’re going to wind up in a pressured shooting situation. It’s true that you may not notice the recoil of your shot in the heat of the moment, but if you flinch on the bench in a relaxed situation, you’re going to flinch under pressure as well. And, you’ll usually flinch worse than you normally would. Don’t believe me? Just bring a lawn chair and tub of popcorn to the shooting range at any Alaskan brown bear camp and watch the show.

Read Next: How to Shoot Iron Sights

Executing a smooth trigger pull, being able to aim, shoot, cycle, and repeat swiftly while under pressure are all a product of repetition. If you’re shooting your .22 bolt rifle constantly and cycling the bolt immediately and getting back on target, it will translate to how you operate under pressure—even with a different rifle. Pulling up and flipping beer cans with a Daisy BB gun repeatedly will make it more natural for you to acquire a fast, crisp sight picture with your hunting rifle.

Some of us were blessed with BB guns, .22’s and plenty of room to shoot them when we were kids. We didn’t know that we were building skills that would serve us in adulthood. Do that for your kids if you can, but don’t ever stop shooting them yourself, because at any stage, they can help make you an even better shooter.