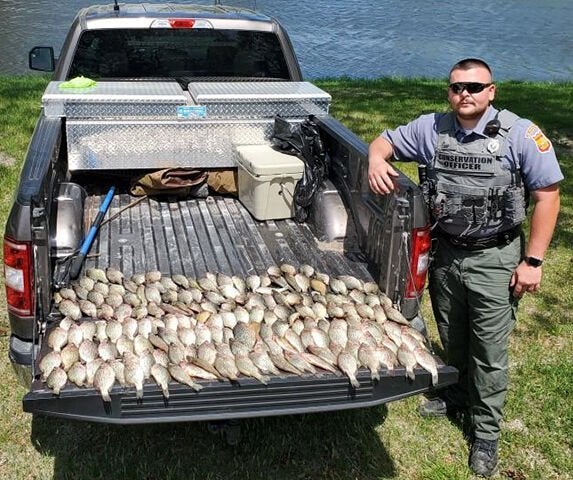 Omaha’s 135-acre Standing Bear Lake is a popular spot for shoreline fishermen in the spring because the crappie and bluegill action can be red hot this time of year.

“When conditions are right, crappies and bluegills are bedding near shore and are very vulnerable,” says Lt. Stacey Lewton with the Nebraska Game and Parks Commission. “Guys can catch them as fast as they unhook them, re-bait, and cast again.”

Unfortunately, some folks get carried away. And that’s exactly what happened earlier this month, Lewton says, when two groups of fishermen were caught with far more than their fair share of panfish on separate occasions. Altogether, the two groups—each made up of three fishermen—were found in possession of 265 crappies and bluegills from the lake. The six individuals were apprehended by Nebraska Conservation Officers Brian Arp, Heath Packett, and Rich Berggren, according to a post on the Commission’s Facebook page.

In the first incident, officers came across three adults who were well over their legal daily bag limit of 15 crappies apiece. One poacher, who had 104 crappies over his legal limit, was ticketed and fined $2,849. A second poacher received a ticket and a fine for a $349, while the third person in the group was not cited.

The second incident occurred four days later, when a different group was apprehended with more than 100 crappies and bluegills over their legal limit. One of those fishermen received a ticket and was fined $2,449. Another was cited and fined $549.

“They’re pretty sizeable over-bags,” Lewton tells Outdoor Life. “We do receive some of these every day, but this is an extraordinarily high number of fish.”

Read Next: Three Men Charged for Spearing Bass and Panfish in Georgia

Altogether, fines from the two incidents total $6,196. Lewton explains that the fishermen cited for these violations can either pay their fines outright or have their day in court before a judge.

All 265 fish were seized and frozen for use as evidence. Once the cases are adjudicated, the frozen fish will be donated to a local food bank if they are still considered edible. If the fish aren’t fit for human consumption, Lewton says they’ll be used as food for rehabilitated birds at local wildlife clinics.

“We try to make sure fish and game isn’t wasted,” he adds.