“10 Inches of Arrow Were in My Leg.” Bowhunter Suffers Freak Accident on Elk Hunt 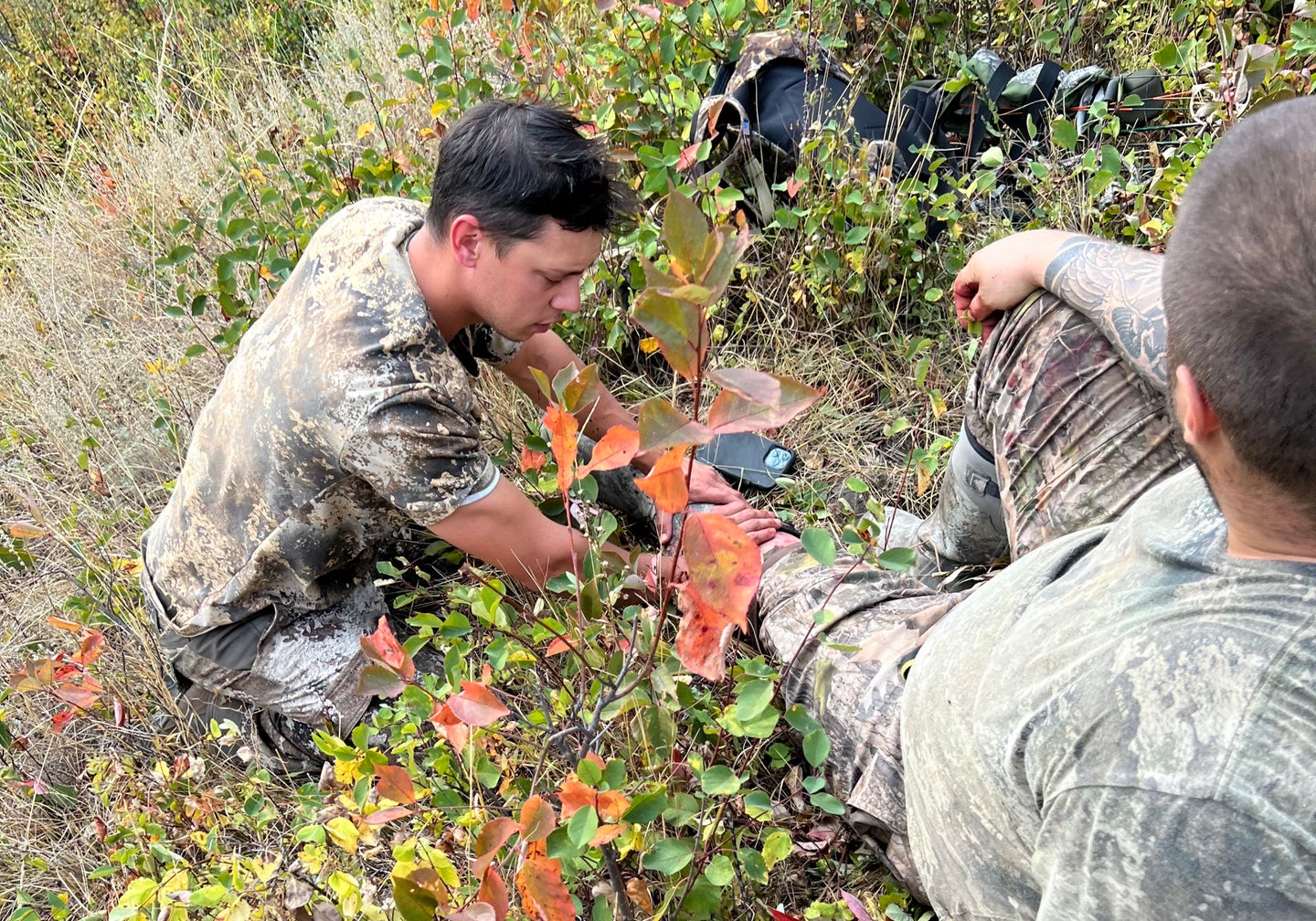 It’s been a tough year for Chris Landers. The 30-year-old hunter from Strathmore, Alberta underwent four ocular surgeries at the beginning of 2022 to fix a detached retina, the result of a work accident during which some metal shavings flew into his eye. He hunted in 2021 before realizing the retina was an issue and successfully harvested an elk and a black bear. He was hoping to have similar success with his 2022 elk season, but things wouldn’t go as planned.

Landers and his buddies were hunting in the Spirit River valley north of Grand Prairie in the afternoon of Thursday, Sept. 15 when disaster struck. As they followed after a bugling elk, some thick brush knocked an arrow out of Landers’ quiver. Somehow, the arrow stuck into the ground with the broadhead pointing up. Landers didn’t see it in time and stepped right into the razor-sharp blades. The broadhead gouged into his shin, soared up behind his knee, and plunged into the back of his lower thigh.

The blades severed his peroneal nerve and nicked an artery. This not only turned his left leg into a fountain of blood, but also rendered it practically immobile and without any sensory function. Extreme damage to the tissue and cartilage around his knee joint only got worse as he fell to the ground.

“[The arrow] went right beside the bone, almost halfway up my leg,” Landers tells Outdoor Life from a hospital in Calgary. “It went past my knee and snapped off somewhere. We found the bottom half of the arrow and another small chunk where it broke, so about 10 inches of arrow were in my leg.”

His hunting partners Devon Spencer and Jared Manuel immediately sprung into action. They were miraculously in the only spot of cell phone service they’d seen in the two days they’d been hunting, so they called in emergency services.

“We stopped the bleeding so that it wasn’t crazy bad, and I just tried to calm myself down a little bit,” Landers says. “We had STARS Air Ambulance flying overhead about an hour and a half later. They nosed down and one of the nurses came down and put a tourniquet on. She couldn’t get an I.V. in because I was in shock, so she had to do an [intraosseous infusion] and had to drill a hole in my leg to put meds in through my shinbone.”

The STARS Air Ambulance landed about three quarters of a mile away in a clearing, and emergency responders arrived with chainsaws to cut a closer clearing for the search and rescue (SAR) helicopter to land on top of the hill. With the help of two other people, Landers hopped to the SAR helicopter, which then dropped him down to the air ambulance for transport to the Grand Prairie Regional Hospital. He underwent emergency surgery to remove the arrow upon arrival and then relocated to Calgary for more procedures.

“I had the surgery for the arrow, then surgery for my nerve, then I had surgery to fix the artery. Then I’ve had four debridements, where they’ve cut dead muscle out of the front of my leg so it doesn’t get infected,” Landers says. “I feel alright. It’s been a lot of surgery, but it looks like that might be over with now until they do some skin grafts. But I’ll be in the hospital for a few more weeks I have to imagine.”

Whether Landers will regain full mobility and sensory function in his leg remains to be seen. Nerve regeneration moves at a slow pace, which complicates the process.

“The nerve itself was cut really high up, and it only grows about an inch a month from where it was cut into the dead part, so it grows down my leg an inch a month. So it’s going to be a long time. I’m probably not going to have much up-and-down movement in my foot. But they haven’t said anything because they don’t know. But because of the nerve damage and muscle loss, it doesn’t look that good. But we’re just taking it as it comes. It’s not something I can change now so I’m trying not to get too worked up about it.”

Landers was carrying 150-grain KuduPoint fixed-blade broadheads at the time, and says the one that filleted him was brand new.

“Yeah, they work really good,” Landers chuckles. “My buddies and I all run them. They’re a phenomenal broadhead.”

Despite the physical and emotional trauma of such a gruesome accident, Landers and his wife Taya are trying their hardest to remain calm and upbeat.

“It’s been exceptionally tough because I’m in nursing school right now, and what we’re learning about is what I’m going through in real life with Chris, but otherwise we’re doing pretty good,” Taya says. “We’re trying to stay as positive as we can and just move forward with whatever they choose to do with his leg.”

Multiple GoFundMe fundraisers have been set up to support the Landers as they stare down the long road to recovery. This one was created by his brother Colin, and this one by his hunting friends Paul Walt and Jacey Bronson, who were out in a different area during the accident.

“I have benefits but they’re not the best. The GoFundMe and everyone helping, it’s been amazing, really,” Landers says. “They’ve helped out so much, it’s unbelievable to think about.”