Why I Bowhunt During Gun Season

It's common for hunters to ask me why I refuse to put down my bow when gun season opens. My answer is always the same 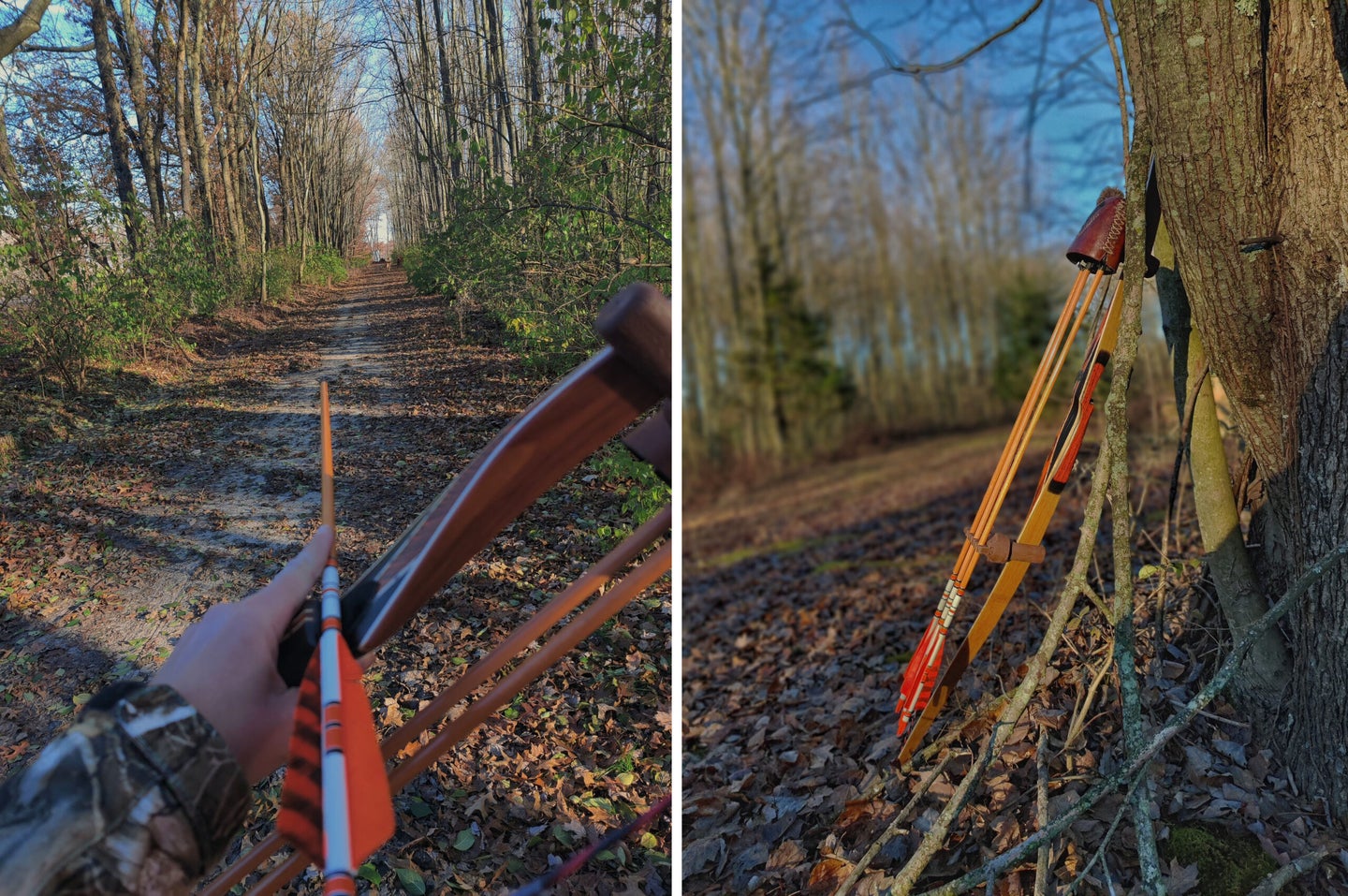 I put one boot in front of the other, my footsteps dampened by the wet leaves covering the ground. My longbow in one hand, I stepped out of the underbrush onto a logging trail that’s often used by deer. I saw a flash of brown and froze, but it was too late. The group of deer crossing the path 50 yards in front of me had already stopped to stare at me. I slowly raised my bow in my left hand, my arrow already nocked. I began to inch forward, seeing if I could possibly get any closer and take a shot. When I reached 40 yards, the deer bounded off, tails waving in the air.

As I watched them make their exit, I heard a shot from the neighboring farm. It was opening day of gun season, but I’d purposely left mine at home. If I had been hunting with one, there would have been a dead deer going home in the back of my pickup truck.

Read Next: Bloodlines: How One Bowhunter’s Decision Is Shaping the Way Three Generations Hunt

Yet, I was okay with the fact that I would go home empty handed. It comes with the territory when you choose to strictly bow hunt. That territory also puzzles plenty of hunters.

It’s a question I get asked every year: Why not just pick up a gun for the week of firearm season? Many people question how safe it is to hunt with a bow during gun season. I’ve never seen that as an issue. I tend to stick to private land or archery-only areas during gun season, I always wear blaze orange per Ohio law, and I have never once felt as if I was unsafe by “bringing a bow to a gun hunt.”

Other people say it’s too hard to bowhunter late-season deer. And it’s true that bowhunting during and after gun season is difficult. The deer tend to be more spooked, and many go nocturnal for weeks after gun season. My deer sightings are few and far between, no matter how many I had been seeing before firearm season. But I started bowhunting for a challenge, and I’m not one to throw in the towel so quickly.

My love for traditional archery, and the goals I have set for myself within that pursuit, have prevented me from picking up a gun for the past six years. Over the past few seasons, I have pushed myself to become a better hunter with my stick bow, and each year I expect more of myself. I have yet to kill an antlered deer with traditional equipment, which is something I’m still working toward this season. It would be easy to grab a gun and fill the freezer during Ohio’s six days of firearm season. But you can’t say to yourself, “I really hope I kill something with my longbow this week!” and then grab the rifle on the way out the door. That’s a sure way to NOT get something with the longbow, and I know firsthand the regret that follows when I give in to that kind of impulse.

A decade ago, I was still hunting with a compound bow. For weeks during the early bowseason, I hunted any chance I could. I was determined to shoot one of the big bucks that continued to show up on my game cameras, and I passed young buck after young buck, patiently waiting for Mr. Right.

Then November rolled around, and with it came a two-day muzzleloader season. For some reason, on that warm and rainy morning, I grabbed the muzzleloader instead of my bow. After a few hours in my stand, raindrops running down my face, I considered heading back for a cup of coffee and some dry clothes. When I stood in my ladder stand to climb down, something told me to glance over my shoulder—and all I could see was white antlers coming through the foggy field toward me.

Read Next: Nine-Year-Old Bowhunter Takes His Second Deer—With a Recurve

The buck came to 20 yards and stopped. I took the shot and watched him drop. That wide 8-pointer is the biggest buck I’ve shot so far, and to this day I still regret not taking my bow that morning. Was it awesome to take him with a muzzleloader? Sure. Yet I felt like I had given up too quickly when it came to achieving my goals as a bowhunter. And, at 20 yards, I know that I could have taken that very same shot with a bow.

The simple reason that I love traditional bowhunting is the main reason I stick with it, and do not waver. It’s more rewarding to me than hunting with a rifle, or even a compound. It provides a challenge and, when I’m successful, a feeling of accomplishment that rivals no other. That philosophy applies to however you hunt: Don’t let other hunters or the changing of the season pressure you into changing your mind when it comes to how you hunt. It’s your tag, and your hunt, so do what makes you happy.