A crossbow hunter figured out this reclusive buck, and tagged him right on schedule 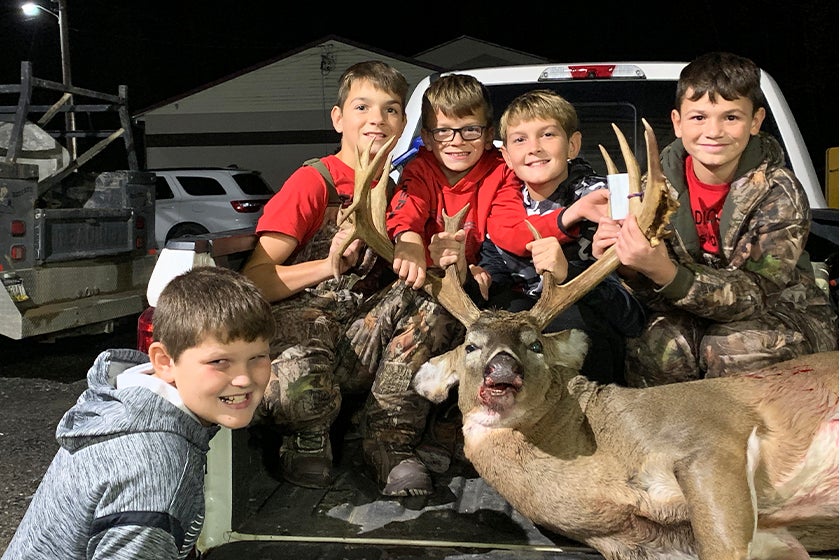 John Raubenstrauch took along a gang of kids to help on the recovery of Spoons.
SHARE

Four years ago John Raubenstrauch spotted a 10-point buck on a field edge near his home in Elk County, Pennsylvania, and knew the buck was destined to be a dandy. He spotted the deer off and on over the next few years, and each time his hunch was confirmed.

“Two years ago he just blew up to being huge,” the 51-year-old hunter told Outdoor Life. “I put out trail cameras to try to learn his patterns. It was tough though, because he was a loner. But I stayed with him using my cameras and got lots of photos of him.”

Raubenstrauch and his hunting buddies, who have kids, involve the youngsters as much as possible with hunting. When the kids saw photos of the huge buck, they named the deer “Soup,” he says, because two big drop-tines on its nontypical rack flare like a pair of soup spoons.

This spring, Raubenstrauch began scouting Soup in earnest, in an area where a friend had found the buck’s sheds. The buck moved often, and Raubenstrauch stayed on the hunt, often walking the woods and jumping the buck to learn where he lived, bedded, fed, and traveled.

Raubenstrauch finally pinpointed the buck’s activity on public ground, at the edge of rugged and wild Allegheny National Forest that lies northeast of Pittsburgh.

“He was living on a hilltop in an impenetrable laurel thick,” says Raubenstrauch. “It’s a place you can’t even crawl into. He only came out once every four days to feed on acorns, which I learned from my trail cameras.”

Raubenstrauch decided the afternoon of Oct. 25 was his best opportunity to catch Soup outside the laurel thicket. He tried to get the son of a friend to hunt with him for Soup, since the kids knew the buck so well from photos. But the boy had plans to hunt with his grandfather.

So Raubenstrauch hunted alone that afternoon, simply sitting on the ground near the laurel tangles, watching acorns raining on the hilltop nearby. A bit after 6 p.m. Soup stepped cautiously from the leafy laurel jungle, and he was even bigger than Raubenstrauch had imagined. The buck looked at Raubenstrauch for a time, then eventually dropped his head for nuts. That’s when Raubenstrauch raised his CenterPoint crossbow and sent a 100-grain fixed 3-blade Muzzy Trocar broadhead from inside 30 yards.

“I saw the arrow in flight with a Lumenok nock, and knew it looked like a good hit,” he says. “But I was afraid to check the spot where Soup was standing when he jumped back into the laurels. So I headed home.”

Raubenstrauch returned 30 minutes later with five buddies and six of their kids. The crew got to the place where Soup had been hit, and found the buck almost immediately. The deer had only gone 50 yards, dropping after a double-lung shot.

“Everyone knew it was Soup, and they were excited to see and touch the buck,” Raubenstrauch says.

Soup weighed 240 pounds field dressed. He has 16 scorable points, and members of his archery club collectively scored the buck as a nontypical at 205 6/8 inches. Raubenstrauch has contacted Pennsylvania game officials about the buck, and they think it will score even bigger, landing high in the state record book. Soup will officially be scored after the 60-day drying period.

“He’s a massive buck, and we think he’s 7.5-years old,” says Raubenstrauch. “It looks like Soup ruptured something in his antlers when he was in velvet, which gives its right side such a large circumference.”