The last time I cast for cutthroat trout I was a mile above sea level in the Bob Marshall Wilderness.... 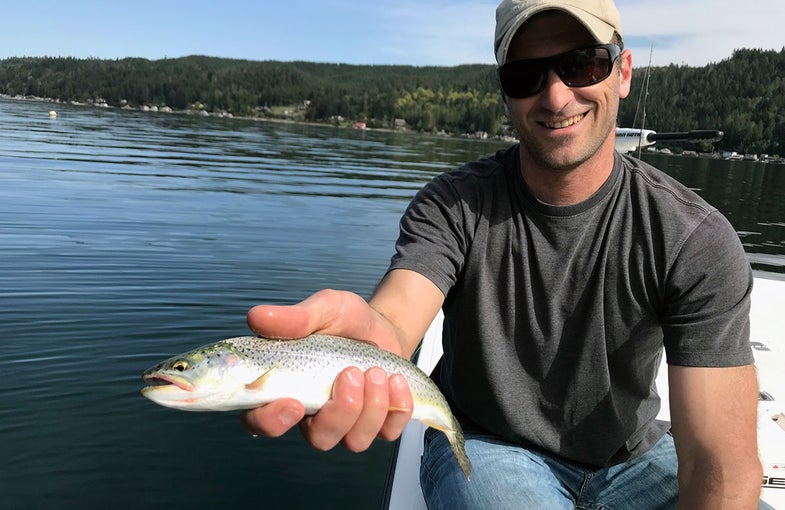 The last time I cast for cutthroat trout I was a mile above sea level in the Bob Marshall Wilderness. Today I was waving a 5-weight flyrod off the bow of a 19-foot Palm Harbor fishing boat, probing the salt-water shallows of Washington State’s Puget Sound.

In the Bob, we kept an eye out for grizzly bears. Here, as we were about to see, the apex predators outweigh a bear by 10 times—and run in packs.

One thing (besides the trout) held these vastly different places together: Public access. Here, as across the country, programs like the Land & Water Conservation Fund are putting people on the water.

“We frequently launch from public boat ramps, state parks and the like,” said guide, Aaron O’Brien of Sea-Run Flyfishing, who takes clients from around the world after these fish, both from the beach and from small skiffs. “Without those access points we simply would not have a business.”

One example is Twanoh State Park. It includes boat ramps and 3,000 feet of beach. The views of the Olympic Mountains and surrounding forests are astounding.

Access spots like this are increasingly valuable as Seattle’s building boom brings in more and more people and puts more pressure on limited space and resources.

LWCF funding helped secure and expand Twanoh, and similar access sites around the United States, by directing royalties from off-shore oil drilling to access and conservation. The 50-year-old law is set to expire September 30, unless Congress moves to reauthorize.

But, back to the fishing … My friend Jeff Cappella cast his front-loaded line nearly onto the beach, stripping quickly. We fished hard all afternoon under a cloudless sky.

I got to examine the sea-run cutthroat up close because Jeff kept putting them in the landing net. My luck was cold. I tossed one air-ball after another until my rotator cuff screamed.

The evening light made the day even more luxurious, but Jeff and I had a business dinner we could not miss. We stowed the rods as I glanced across Hood Canal. A mile and a half away, I saw a geyser-like puff of water erupting from the surface. Then another.

Dinner forgotten, we motored across the bay, cutting the engine when we approached a quarter mile of the misty explosions. Even without binoculars, we could see the black dorsal fins cutting the surface. They swam straight toward us.

Orcas. There was a big bull with a dorsal fin as tall as a grown man. There were also a couple smaller females and one newborn calf. The pod passed, slapping tail and leaping into the sky. They looked playful, until you consider orcas take down blue whales, the largest creature on earth.

There are only about 75 resident orcas left in the 100,000 square miles of the Puget Sound. Their numbers are declining sharply, because lack of prey fish and habitat degradation. For a guide like O’Brien, seeing them is a once-in-a-season proposition. But for mountain dwellers like Jeff and I, it’s more like once in a lifetime.

Sometimes, luck takes forms other than fish. It was a day I’ll always remember, in a place that’s open to everyone.