Deer of the Year Gallery Part 1 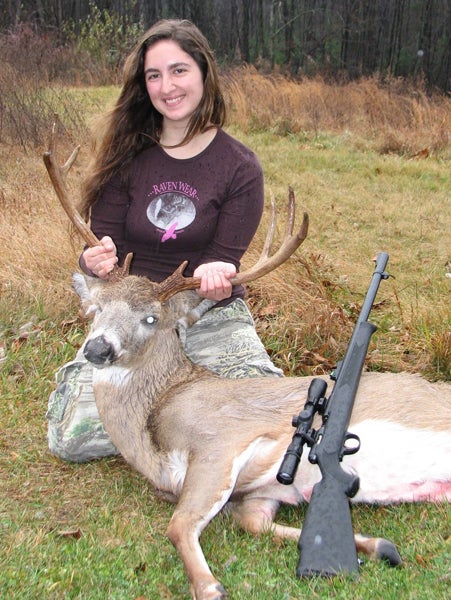 North Jersey--Having always been known to all my friends as the most hardcore female hunter they know, I decided that hunting season 2009 was going to be especially good for me; I was determined to shoot a big buck. Early bow season I killed a doe, and caught glimpses of big bucks but, never had a shot. After passing up small buck after small buck, four pointers and spikes, ones I would have shot had I not set my mind on a big one, I was getting discouraged that I would never see one "the one". Bow season came to an end, and I had just about given up. Opening Day of muzzleloader, I was in the stand with my .50 cal. CVA inline, and it started to rain. I was just about to get out of my tree stand when a little four point walked in, followed by a much bigger eight point. He was the biggest I had seen all year, and when he got to 25 yards, I made the shot. He went 35 yards and died. I hadn't realized how big he was, or how wide his rack was until I walked up to him. There are no words to describe how excited I was, and I realized that after days of hunting and no buck, I had finally shot the biggest buck of my life! The waiting had made success that much sweeter, and I had never been so proud. . A 4 1/2 year old buck, he weighed 150 pounds field dressed. His rack was what made him unique, measuring an impressive inside spread of 22 inches wide and scoring 124 and 3/4 inches.--Beka Garris.
SHARE
Big Game Hunting
Deer Hunting
Whitetail Deer Hunting
mule deer