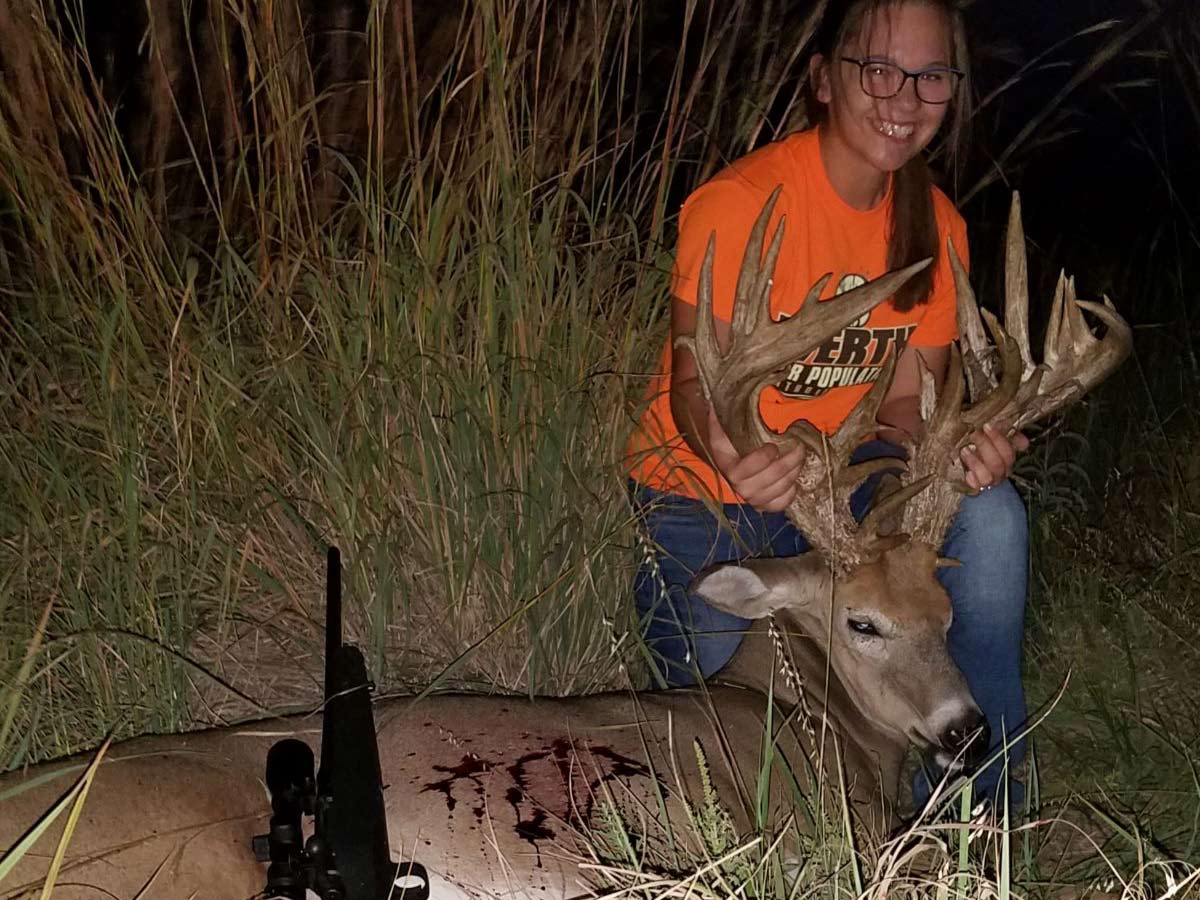 Paslie’s buck is one of the biggest ever shot by a teen. Kurt Werth
SHARE

Paslie Werth’s hunting career is off to an exceptional start. The 14-year-old from western Kansas has been deer hunting only four years. In each season she has shot a whitetail. Last year on the Kansas rifle opener, she tagged the buck of a lifetime—a 178-inch 12-point—with a 150-yard shot from a .243 Win. off her family’s farm in Kiowa County. This season’s buck slightly trumped that dinky deer…by more than 100 inches.

“There’s this one cedar tree in our CRP field, and around 8 o’clock he stood up,” Werth said. “My dad was packing up and making a little bit of noise, so I had to shush him.”

Kurt Werth was about to scold his daughter for telling him to “be quiet,” but then he caught sight of the buck, a massive 40-point, 282 6/8-inch (gross green score) buck. The entire family had been tracking the growth of this particular deer for several years. Pasile’s older sister Jaeden had passed on the buck three seasons ago, and Kurt did the same last year. He estimated that the buck was in the 230s when he decided to let it walk, so all the Werth’s had aspirations of hopefully shooting the deer this season. When the buck stood up for Paslie, it happened so fast she didn’t have time to get nervous. She shot the deer inside 30 yards with a .270. He didn’t go more than 50 yards.

“I knew he still had room to grow, but I didn’t know he would get this big,” Kurt Werth said. “Luckily our neighbors believe in letting deer reach their full potential, but they also knew this buck was around, so I knew we would have to get after him early. Luckily for Paslie she is the only one in our family who can still hunt the youth season, so she got him.”

For some perspective, the biggest nontypical shot with a firearm in Kansas was a 280 4/8-inch buck taken in 1987 by Joseph Waters. Mark Watson came close to breaking that record in 2018 with a buck that measured 280 inches. The current nontypical archery record in Kansas stands at 264 1/8 inches, but that will likely be eclipsed by Brian Butcher’s giant 67-point buck that measured an unbelievable 321 3/8 inches (unofficial net on the B&C scale) in October of 2019. If that score holds it would be the fourth largest nontypical ever, but it won’t be officially measured until 2022.

Paslie killed her buck on the second day of Kansas’ youth season. It was a blistering 102 degrees that afternoon, and she and Kurt had not seen much deer movement leading up to their evening sit in a sweltering ground blind. As Kurt was packing up for the evening he dropped his grunt call, and as he reached for it, the giant buck stood from its bed in the CRP. Father and daughter had crept into the blind stealthily around 3 p.m., but neither one of them expected to see any deer come to its feet a mere 25 yards away.

“I wasn’t nervous when I took the shot, but it really hit me when we walked up to the buck,” Paslie said. “I knew it was a big deer, but I didn’t really understand how impressive of a buck he was until we walked up to him. I have to thank my parents, grandparents, sister, and brother. They’ve all taught me so much about hunting and without them, I couldn’t have shot this buck.”

Paslie’s deer could be one of the biggest ever shot by a teenager. Her dad thinks once the buck is officially scored after the mandatory 60-day drying period it will measure in the 260s. That won’t be enough to surpass Tony Lovstuen’s 300-plus-inch Iowa nontypical shot in 2003, but it will put her in second place, according to North American Whitetail.

“It has the potential to be the biggest buck ever shot by a woman too,” said Kurt Werth. “There are two bucks that measure in the 250s, and I think Paslie’s deer could beat those. We just have to wait a few more weeks until the rack dries out.”

Read Next: Wisconsin Shed Hunter Might Set the State’s Next Whitetail Record With This Incredible Find

There have been multiple large deer taken off the Werth property. Jaeden has shot a 182-inch buck, and other family members have killed deer in the 170s and 180s. Kurt Werth credits deer management and their neighbor’s willingness to let deer mature.

“We have this rule that if we see a big 3-year-old…let it walk,” Kurt Werth said. “We’re lucky that everyone around us feels the same way, and fortunately that has led to several of our family members shooting big deer.”