A great white feeding frenzy ensued off the coast of South Carolina. 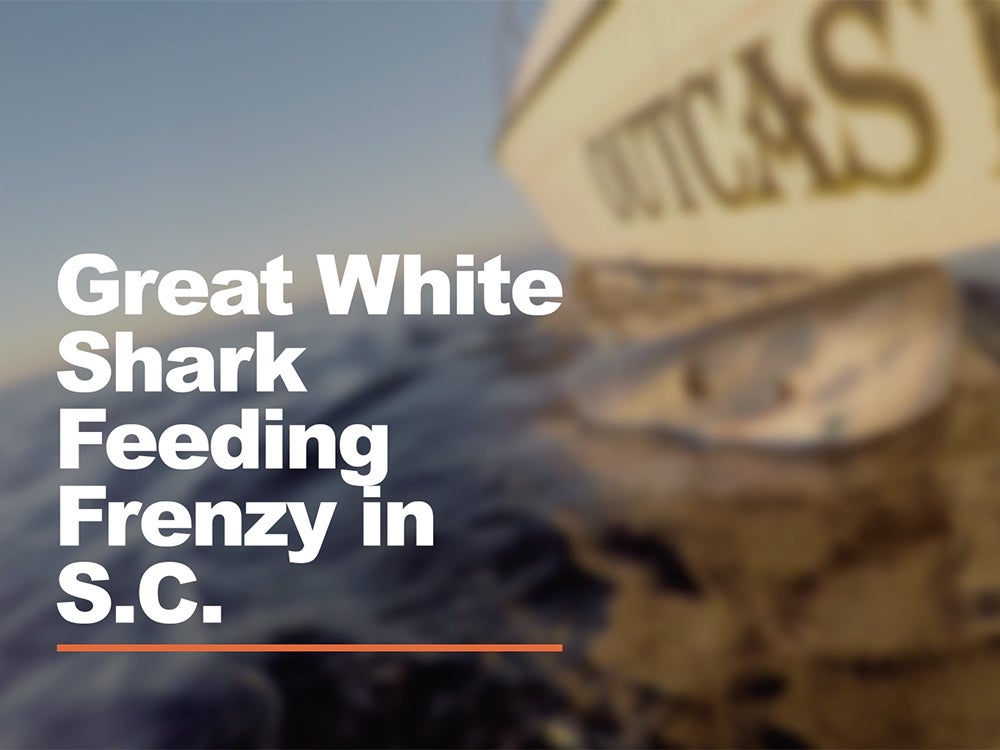 The fishing was slow off the coast of Hilton Head Island, South Carolina last January 18, so Captain Chip Michalove of Outcast Sport Fishing Charters ventured to a new spot. He hit the motherload.

“The place was absolutely loaded with sharks. It was just one after another all day long,” says Michalove. He and his crew landed seven great white sharks in a matter of hours, including a 12.5-foot, 1500-pound female and a 15-foot long, 2,600-pound male, which is the largest known male great white ever tagged in the Atlantic Ocean. “It might have been the biggest discovery of my personal life,” says Michalove.

And the renowned fishing captain has made some impressive fishing discoveries before. He was the man who realized that there were great whites in the area in the first place. Previously, neither scientists nor anglers knew they were even relatively close by.

“These sharks have been here since the beginning of time, but we just didn’t know it,” says Michalove. “When I was in high school, sea turtles would wash up on the beach with huge half-moon bites out of them in the wintertime when other species of sharks aren’t in the area. So, there were some clues.”

“I just wanted to see one, and I figured if I kept trying, I would eventually do so before I died. It’s not the same as if I went to South Africa or Australia. I wanted it to be in my backyard.”

But it wasn’t easy, especially because Michalove had no frame of reference.

“It’s probably the only thing I’ve ever done in my life where I couldn’t call anybody to ask for help,” he says. “There’s nobody else alive who is catching these on a rod and reel.”

In the United States, great whites are a protected species, and it’s generally illegal to target them. In the Northwest Atlantic Ocean, the Atlantic White Shark Conservancy estimates that the white shark population has declined by over 75% in the past 15 years. Even less is known about the populations south of New York, where Michalove fishes—which is why his work is so important.

After catching his first great white, the Atlantic White Shark Conservancy called him and asked if he wanted to work with Dr. Greg Skomal, who’s widely considered the leading scientist on the species. “When they asked me if I would be on his permit to tag great whites, I couldn’t even finish a sentence before I said absolutely,” remembers Michalove.

Of the seven sharks Michalove caught on January 18, he tagged four of them. The satellite tags will send back crucial information to the scientists, such as the sharks’ movement and water depths, which helps them better understand their migration routes, feeding habits, and more.

Back when he started targeting great whites, it took Michalove some time to put together the puzzle on how to catch them.

“You have to think outside of the box when fishing for great whites. I made a lot of mistakes when I first started fishing for them because I was fishing for an animal that was so much larger than I was used to. I’ve caught 1,000-pound tiger sharks, but when you’re dealing with a great white, it’s an elephant. Not only is it hard to find them, but how do you put the brakes on a fish that large?”

Eventually, he figured out a rod-and-reel combo that does the job. He uses a Shimano Tiagra 50w reel with a Berserker rod. Beyond that, he likes to keep his strategies to himself, not out of selfishness but a deep concern for the conservation of the species. He has nightmares about masses of people illegally trying to emulate him, which could harm the great white population. So, he keeps his go-to spots secret and makes sure he uses only the same, trusted crew members with him when he targets great whites.

Michalove’s concern for the sharks’ wellbeing stems from a deep respect for the species—but not for the usual reasons.

“It’s the smartest fish in the sea. There’s a methodical thinking process within them,” he says. “A great white shark isn’t what you see on T.V. It’s not what Shark Week makes it out to be. It’s not jaws. It’s not going to jump in the boat and kill everybody. This is a fish that shows up behind the boat and is very careful and meticulous about what it does.”

Michalove adds that the sharks don’t panic and tire themselves out like other species do once hooked—that is if they even take the bait in the first place. They’ll often even swim toward the boat on purpose in order to try to chew through the slack line. Michalove lost the first three great whites he ever hooked because of this phenomenon.

“There’s no adrenaline rush like catching a 3,000-pound shark. You can’t jump out of an airplane and get the same kind of rush you do from seeing a huge shadow behind a boat with a massive dorsal fin sticking up out of the water.”