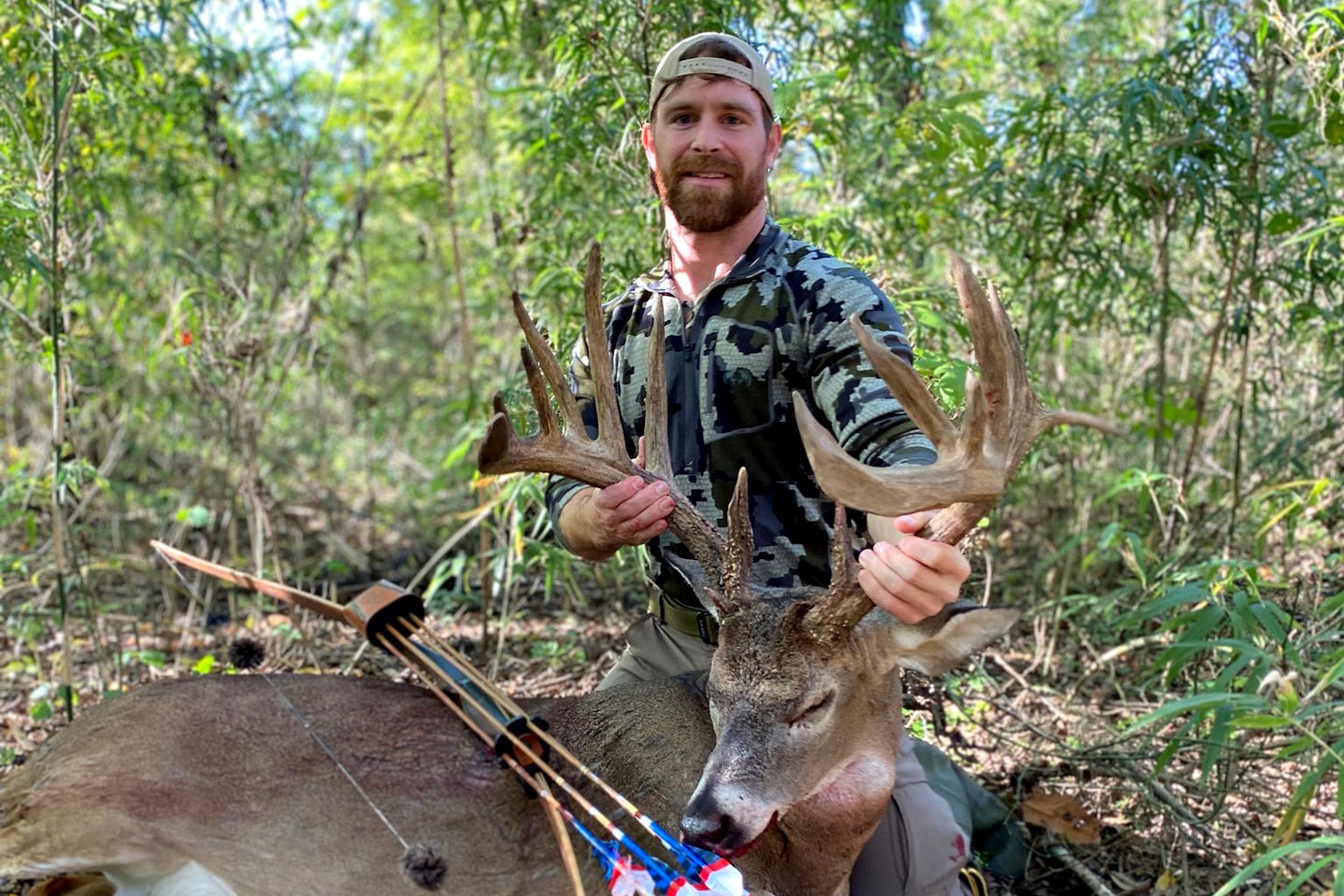 It’s pretty common to scroll through your social media news feed this time of year and see various photos of bowhunters sitting behind the monster bucks they have shot.

Jonathan Moreland grew up hunting with a compound bow until, one day, he saw one of his father’s old recurves hanging on the wall. He decided he would try to take a deer with it. When he succeeded, he was hooked. And 11 years later, he is still shooting a trad bow.

Moreland’s Arkansas bow season started much like any other. He had cameras at the private hunting lease he hunts with his brother, Josh. The 34,000-acre lease is owned by a timber company, and is broken into smaller, huntable pieces.

The moment Moreland got photos of a buck with wide, heavy antlers and what looked like 15 scoreable points, he made the decision to target only that deer.

“Arkansas deer usually score around 120 to 130 inches,” Moreland says. But this buck would measure much more than that. It’s hard to justify shooting a spike or forkhorn when you know there is a Boone and Crockett buck in the area.

Moreland’s first encounter with the buck occurred on a hunt early in the season. A coyote ran out of a nearby thicket and spooked the buck past his stand, but with no possibility for a shot. He encountered the buck a second time soon after. He watched the buck working a licking branch from his tree, but again, didn’t have a shot. All told, Moreland would see the buck a total of six times before the deer slipped up.

On the afternoon of Oct. 13, Moreland finally got the shot he’d been waiting for. The buck walked past him inside 20 yards. But at his shot, the deer jumped the stream and his arrow hit high. Knowing it wasn’t a great shot, Johnathan called a buddy who had a tracking dog. When they found the arrow, coated with chunks of meat and hair and little blood, they knew the buck was not dead, and backed out.

Eight hours later, one of the trail cameras captured photos of the buck, who seemed to be acting as if nothing had happened.

Although Moreland hadn’t gun-hunted in years, he made the decision to muzzleloader hunt during Arkansas’ early blackpowder season. As luck would have it, the buck didn’t show.

The day before Halloween, Johnathan saw the buck chasing a doe at 4:30 p.m., but the buck stayed out of range. If he had any chance of killing the deer with his 50-pound Toelke Whip longbow, Johnathan was going to have to get the buck in close again. Part of the beauty (and difficulty) of hunting with traditional equipment, is that you have to hunt close. This is also the part that can be frustrating. Bucks this big don’t get that way by being stupid. And to get close enough to kill one, you need to be smarter than they are.

On Nov. 1, Moreland got a later start than he had planned, and didn’t get to his stand until 12:30 that afternoon. Moreland, who always brings his camera along to film hunts, talked to the rolling camera for about 20 minutes before settling into his climber to wait.

Within minutes, the buck showed. He stood broadside, eight paces away. Moreland’s arrow went in perfectly through the top of one lung, but hit a rib on the opposite side. The buck took off, the arrow still in him.

“I shot the exact hair on the deer that I was aiming for,” says Moreland.

From his stand, he was able to see the buck go down. Moreland’s brother, Josh, had been headed to hunt himself when he heard Johnathan hollering in celebration, and went to investigate.

After the initial congratulations were over, the brothers walked to the spot where the buck had dropped. To their surprise, he wasn’t there. The deer had fallen, but gotten back up and continued running.

The footage confirmed that Moreland had made a great shot. The buck was definitely dead. But with no exit wound, they didn’t have a great blood trail.

Again, Moreland tried to call his buddy with the tracking dog again, but couldn’t reach him. Instead, he recruited another friend to help him grid-search the woods. In the meantime, the Moreland brothers continued their own search.

In the end, Josh walked right up on the buck. It ran 177 yards—an incredible distance for a deer with a 190-grain broadhead inside of him.

Despite having broken off a 9-inch tine on his left side when he crashed, there was no ground shrinkage. The buck was as massive as he’d looked on camera, and the biggest Moreland had ever killed. It later taped out at 186 3/8 inches.

“Some things are just meant to be,” says Moreland. “After all the crazy things that happened to me while hunting this buck, I just think that I was meant to shoot him.”