The 5 Best Ways to Scout a Mature Buck 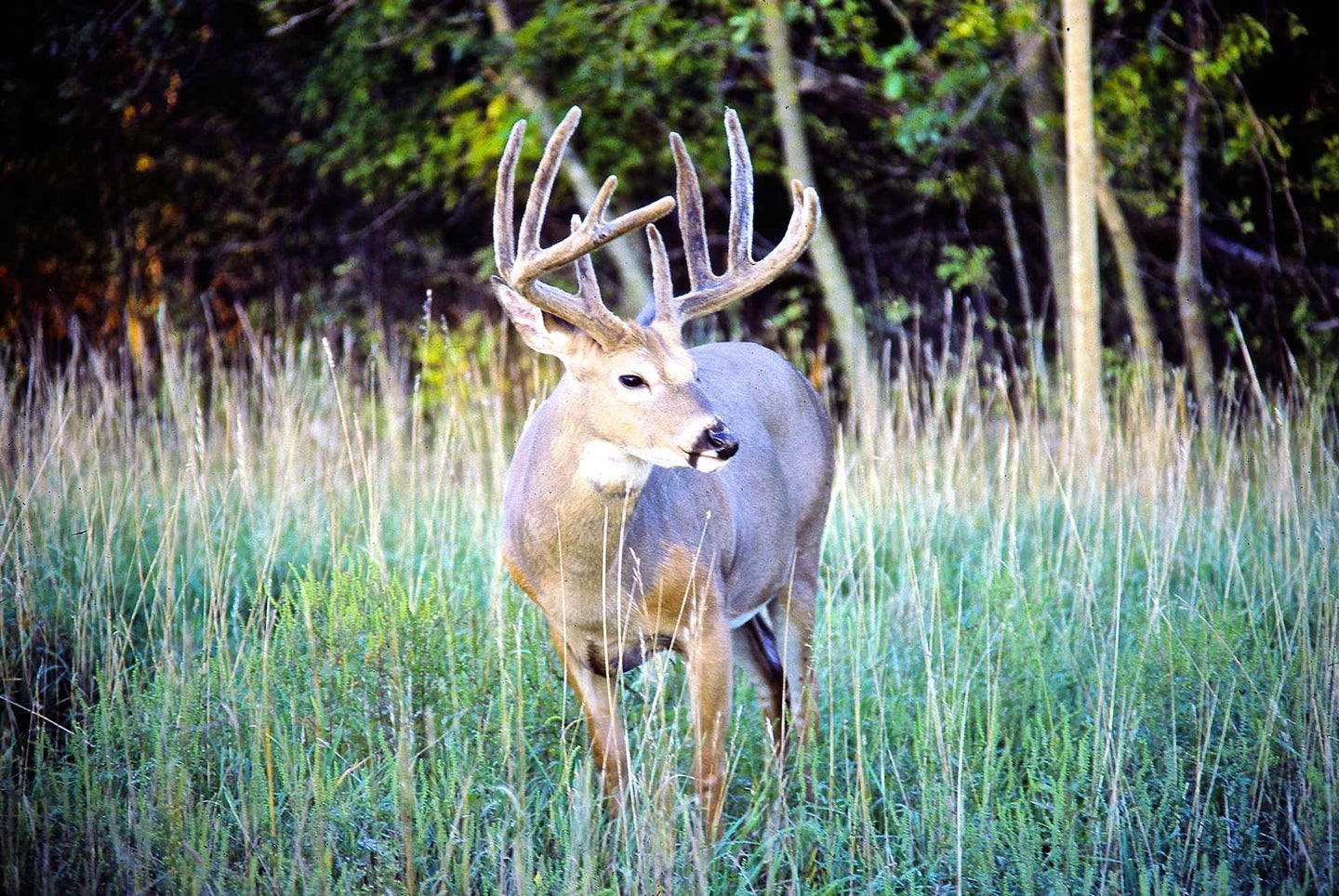 There is a wealth of good information available these days regarding the most effective strategies for taking trophy whitetails. The vast majority of this info deals with the early season, pre-rut, rut, and post-rut periods.

I won’t argue that hunters should hit the woods crammed with as much knowledge as possible regarding taking big bucks. I remain convinced, however, that there’s yet another time frame that warrants just as much attention as any of the aforementioned periods. And that time is the pre-season.

My years of experience with pre-season whitetails has taught me that there’s not a more critical time for serious hunters to step up their game. It also must be done with the utmost caution—which I had to learn the hard way. It’s okay to be a long-range deer watcher. It’s often necessary to put out trail cameras. It’s perfectly fine to put some boots on the ground. But consider these rules first.

1. Observe, but Don’t Be Obvious

Big bucks don’t like being watched—not even if it’s from a distance and not even if the season hasn’t yet opened. Plain and simple, deer are prey creatures, which means they possess an almost innate ability to sense when they’re being watched.

There’s another hazard of pre-season observation that needs to be mentioned, and it involves our behavior. In my neck of the woods, if you’re pulled over to the side of the road during late summer, and are checking out some distant fields with your binoculars and/or spotting scope, you can fully expect to have company. And if they don’t join you right away, you can bet that someone will be checking out those same places when you’re not around.

For several years I leased a prime, 260-acre chunk of whitetail nirvana near my home in Wisconsin. The acreage was comprised of rugged, wooded bluffs with scattered cropland bottoms. A little-used town road snaked through the area, and there were very few houses on that road. One evening in late August, I decided to head to my lease to do some long range observation. After parking my truck on a field lane, I hiked to a vantage point that afforded me a great view of some surrounding cropland. I could also clearly see a stretch of the town road.

During the last hour of daylight, I counted more than two dozen different vehicles slowly cruising around hoping to spot big bucks feeding in the cropland. As a result of all that traffic, I didn’t see a single antlered animal. (And neither did the people who were cruising the town road.)

So precisely how, then, do you go about scouting a spot such as this? Though there’s not much that you can do about interlopers riding town roads, I always try to do my long-distance scouting from at least a quarter-mile away if it’s even remotely feasible. I also use the same stealthy techniques I use while hunting during the season.

A few years back, I arrowed a gorgeous velvet whitetail in Wyoming on the second day of the state’s archery season. In the days leading up to the season opener, we’d actually observed the buck and several dozen other deer as they fed in a large alfalfa field. To scout them, we set up on a tall ridge nearly a mile away from the field with spotting scopes and high-power binoculars.

It took only a few sits on the ridge to get a handle on exactly how the deer were coming into the field from the surrounding cover. Then, a day before the season opened, we put up a ground blind in a spot that would allow me to cover a part of the field where we’d observed the most big-buck feeding activity. I ended up getting a 15-yard chip shot at the big 8-point.

2. Use Cameras with Care

The greatest attribute of modern day scouting cameras is that they’ll operate for weeks or months on the same set of batteries. In addition, high-gig memory cards have the capability to store thousands of photos. Add cellular trail cameras to the equation and you’ll see that there’s absolutely no reason to make repeated trips into your hunting areas during the pre-season to pull and replace memory cards or batteries. Always keep in mind that mature whitetails are extremely good at detecting human presence. Although the hunting season might be weeks away, this activity is nonetheless disturbing. An experience I had with a big Wisconsin 10-point a few years back helped me learn this critical lesson.

I had pinpointed the location of the trophy deer about a month before bow season opened. I immediately put out several cameras in the deer’s core area to see if I could get a read on his travel and feeding patterns. Right from the get-go I started getting photos of the buck—lots of photos.

Though I knew full well that it was inadvisable to do it, temptation got the better of me and I went from checking my cameras once or twice a week, to checking them every other day. My increased intrusion quickly became very evident when the 10-point abruptly disappeared. It took several frustrating days for me to figure out that the buck had relocated his feeding area to an acorn-laden stand of oaks about a half-mile away.

After scouting the area where the buck had gone, I once again put out several cameras. This time, however, I waited a full three days before checking the cards—and I adhered to this pattern right up until the archery season opened. I ended up arrowing the trophy whitetail on the second evening of the season. Interestingly, I captured a photo of the buck with one of those cameras just minutes before shooting him.

Mature whitetails trust their sense of smell more than any of their other senses. Over my career I’ve fooled dozens of big bucks into believing that they’ve heard another buck grunting or two other bucks fighting. With decoys, I’ve also fooled bucks into thinking that their turf had been invaded by an encroacher.

But while we can sometimes fool a deer’s eyes or ears, there’s absolutely no fooling the whitetail’s nose, especially when it comes to human odor. They immediately recognize the smell for what it is and will instantly react—and very seldom in a positive way. That risk runs even higher in the pre-season.

Thanks to warm temperatures and humid weather, the human body is almost certainly putting out more deer-offensive odors during the late summer scouting period than at any point during the open season. In addition, underbrush and foliage is thickest at this time. Which means it’s literally impossible to walk through the woods without rubbing up against something and possibly contaminating it with human odor.

It’s critical to take mid-season odor control precautions in the pre-season as well. I like to be as clean and odor free as humanly possible when scouting and prefer to begin my pre-season, boots-on-the-ground scouting missions very early or very late in the day when humidity levels are at least somewhat lower.

With the distractions of the rut still weeks away, late-summer bucks aren’t rubbing, scraping, chasing does or breeding. That means they’re able to focus their full attentions on the two things that are most important to them this time of year: feeding and survival. Make no mistake—their survival instincts are just as sharp now as they will be in November.

A few seasons ago, a mature 10-point taught me exactly that. In the week leading up to archery season, a friend and I saw a gorgeous 10-point buck feeding in a small, hidden alfalfa field during the last half-hour of daylight. Thinking it would be pretty cool to get some photos of the buck prior to the season opener, the two of us went to the field an hour after daylight one morning and put out several scouting cameras.

Of course, we just had to go back and watch the field that very evening. We weren’t disappointed, as the 10-point again showed up a good half-hour before dark. However, unlike the dozen other deer that had preceded him, the big buck instantly locked up when he hit our tracks from earlier in the day.

Though it had been nearly 12 hours since my partner and I walked the edge of the field putting up scouting cameras, that big buck had absolutely no problem following our tracks. We did capture photos of him on all three cameras we put out and cherish those photos to this day because of the hard lessons they taught us. It was the last time we ever saw the old whitetail. That one brief encounter with a couple of his most feared predators was enough to prompt him to go underground.

Don’t get me wrong, I love spending time and hunting with my buddies. However, there’s a time and place for everything. And if there’s ever a time when we need to strongly consider going solo, it’s during the late pre-season. This is never more of a priority than when it comes to actually getting into the woods to do some first-hand scouting. Two people mean twice as much human odor and twice as much general disturbance.

There’s another important fact to keep in mind regarding having a buddy (or buddies) tag along on your pre-season scouting trips. While those people may adhere to your rules while within sight, you never know what they might do when they’re not within your sight.

Read Next: The Bowhunter’s Broadhead Test

I once took a buddy along on a pre-season scouting mission. We were following a runway through a relatively thick patch of cover when the trail suddenly forked. I could see that the trail to the left continued on, paralleling a nearby soybean field. The trail to the right, on the other hand, wound its way up the side of a rather steep hill toward a much thicker patch of cover.

My buddy took off on that trail before I could stop him. He made it just to the edge of the thicker cover when I heard the tell-tale sound of a deer blowing. Then the patch of cover seemed to explode with running, snorting whitetails—including a couple dandy velvet bucks. Nowadays, I take buddies along when added safety measures are necessary, but only rarely while scouting and only if we can keep noise and scent to a minimum.

Remember, mature bucks in pre-season are every bit as wary as they are once they’re fair game. Blow it now, and you might just be blowing your chances this season.