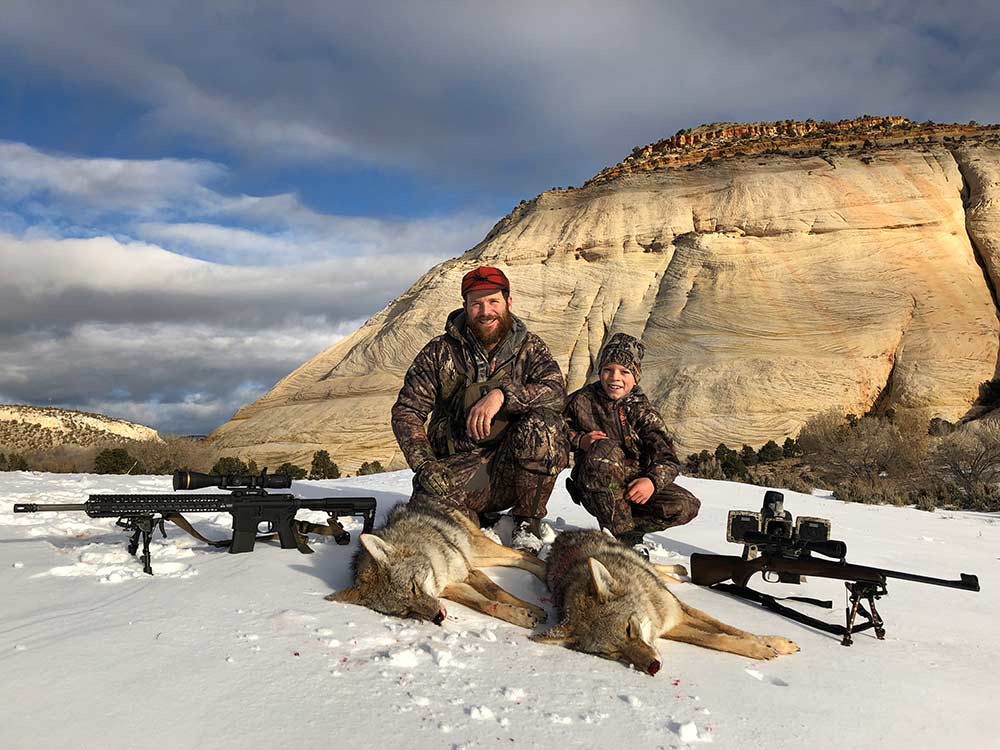 A coyote double the author and his son Josiah capitalized on by using elevation to their advantage, playing the wind, and shooting well under pressure. Aram von Benedikt
SHARE

Watching a brace of coyotes charge in to a call is one of the biggest rushes a hunter can experience. In addition to being exciting, predator hunting hones your skills as a hunter and shooter, and helps keep wildlife populations in balance.

But hunting predators isn’t always riveting. I should know—I’ve experienced a run of failed calling setups that’s got to be close to some kind of world record. Last year, my 10-year-old son Josiah and I had just completed five setups: We called two coyotes on the first setup, a single on the second, a fox during the third, and three coyotes apiece during the fourth and fifth. We were on fire.

That’s when our luck turned and the fire went out (start the Guinness clock). I went coyote-free for the next 50 sets. About that time, I had an opportunity to sit down with Todd Rodgers, owner of Rut-N-Strut outfitters in Oklahoma, and his son Cole, for an interview about predator hunting. Together they share decades of experience hunting and guiding for bobcats and coyotes. Here are some of their best tactics and techniques for putting down predators, which will hopefully prevent you from breaking my record.

If you want to shoot predators, you have to start by hunting where predators live. For coyotes, this means open fields and bottomlands at first light. Later, brushy draws, plum thickets, and hidden coulees are coyote magnets. A pond nearby is a plus, as are areas of tall grass with heavy rodent activity. Bobcats use similar terrain, especially the brushy areas. Trial and error will reveal the best spots, and over time you’ll learn which setups will produce on a regular basis. Try not to hunt a spot more than once a month. The exception is if you’re hunting bobcats, because they have a short memory. If you blow an opportunity at a cat you can typically return the same weekend or even the next day to try again.

It should go without saying, but make sure your vehicle is invisible from where you expect to encounter predators. After all, you’re hunting in their house, and if they see a new vehicle lurking in the kitchen, it’ll make them suspicious. Parking a minimum of 200 yards from your setup is a good rule of thumb.

Sneak into your setup as carefully as you would when hunting a wily old whitetail buck. Don’t skyline yourself, use terrain to your advantage, and be stealthy and quiet while placing your call and setting up. The sound of an MSR bolt being racked doesn’t exactly get coyotes charging in for a meal.

4. Avoid Hidden Routes to the Call

Cats in particular are adept at approaching a call while remaining undercover and unseen. Wary coyotes will do the same thing. Set your electronic call at least 20 yards from any hidden routes so a predator has to reveal itself to check out the call. If you don’t, you might call in a suspicious cat or dog and never even know it was there.

Always set up 50 to 100 yards downwind of your electronic call, or with a quartering wind blowing from the call toward territory you can cover. Coyotes will usually circle downwind of the call in an attempt to confirm with their nose what their ears are telling them. You need to be in position to convert them from predator to pelt when they do.

Elevation is your best friend when choosing a place to set up. If you set up in a tall-grass flat, you might call a coyote or bobcat in close and never see it. Instead, find a point or ridge and set up downwind and overlooking the area you want to call. Just make sure you’re not sky-lined or silhouetted against anything.

The best setup scenario is to put the sun directly behind you and in the predator’s eyes. The worst setup puts the sun shining right on you, illuminating you like a foolish light bulb. Due to shifting wind directions, the time of day, and terrain anomalies, you can’t always set up with the sun behind you, so just do your best to blend into the shadows of a brush pile, coulee bank, or tree trunk.

According to Todd and Cole, one of the most common mistakes hunters make is moving too much while on stand. Predators earn a living by spotting movement, so they’re always on the lookout. Get set up to cover the most likely shot location, start your call, and hold completely still. Move only your eyes. If you spot an incoming predator and have to move to get him in your sights, only do it when he’s behind something and can’t see you.

Don’t set your electronic call right out in the open. Predators will recognize that it doesn’t belong. Instead, disguise it in a little clump of brush, branches, or grass. Bobcats are interested in movement, so if you’re targeting cats, add a motion decoy to your setup.

In the brushy draws and coulees of Oklahoma, the Rodgers like to run their caller intermittently for 15 to 18 minutes when targeting coyotes. During the months from November through January, they’ll use rabbit and bird distress sounds, always ending each calling setup with pup distress sounds. From early February through mid-March (the mating season), they start each setup with an invitation or interrogation howl or two. Then they shift to rabbit distress sounds. They’ll repeat this sequence several times before using pup distress sounds to finish their setup.

Bobcats are usually slower to come in than coyotes and can easily lose concentration, so the Rodgers run their caller constantly for 30 to 40 minutes when hunting cats. They like bird distress sounds for bobcats, with rabbit distress sounds as a good alternative. When calling bobcats, be patient and stay on high alert. Bobcats can show up at any moment and disappear just as quick. If you’re not paying attention, you’ll miss your chance.

High-pressure weather systems almost always offer the best predator hunting. Cold, snowy days can be good, but rain is usually not. Heavy wind inspires predators to seek sheltered areas, and it makes it hard for them to hear your call. In windy conditions, hunt in deep canyons, and hunt tight to cover. During very hot weather, hunting can be good really early and really late, but not much will move during the heat of the day. During severe cold snaps, coyotes will move all day, but if you’re after bobcats, wait until the day warms up. They’re more likely to move once the temps have climbed a bit.

This is a big one. Successfully calling predators is tough. Successfully shooting them is even tougher. They make for a small, suspicious, and wiggly target. Use a good set of cross-sticks under your rifle’s forend to add stability to your position and shot. Get your sights on the predator as soon as he’s within range, and keep them there until he stops. Steady down and press the trigger. Don’t be afraid to take a frontal chest shot, because that may be the only shot you get. If you need to stop a coyote for a shot, try imitating a woof. If he’s spooked and trotting or loping away, give a small howl to stop him one last time. If you call in a double, hit the pup distress call immediately after shooting the first coyote—the second coyote will often stop and look back, giving you a standing shot.

Read Next: The Perfect Cartridge for Pelts

There are several really good electronic calls available to predator hunters, and I’ve been blessed to hunt with most of them. I like them all, but for purity of sound, I have a new favorite: the Primos “Top Dogg.” At the 2019 SHOT show, Primos announced a new series of electronic predator calls that look unorthodox, but are pretty intriguing. I haven’t had the pleasure of shooting a predator over one yet, but I can tell you this: the sound coming from the new 360-degree Top Dogg (complete with sub-woofer) was good enough to make me want to throw away my TV sound bar and replace it with the blue-tooth compatible predator call.