The fish are small, often measuring a mere 8 inches or so. Yet, their sheer beauty can make a man... 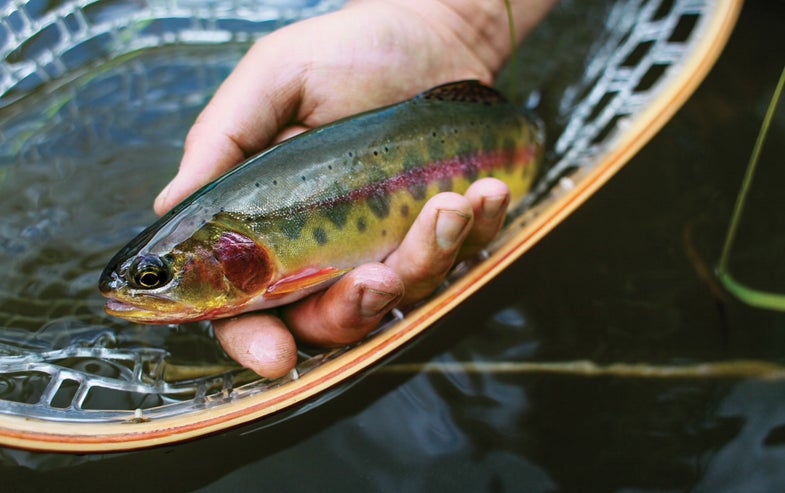 The fish are small, often measuring a mere 8 inches or so. Yet, their sheer beauty can make a man hike for two solid days before making a single cast. Even those with The Right Stuff have been left in awe. “We caught a batch and just rolled our eyes to heaven!” said General Chuck Yeager, who called them one of the greatest of all gamefish.

A popular bromide from the long-rod crowd who target salmonids goes something like this: “Trout don’t live in ugly places.” If this statement holds true, then it seems appropriate that the prettiest of the trout species lives in the most spectacular environs in the world. Proof? Pure-strain golden trout have a tiny native range in the gin-clear streams of California’s Southern Sierra Nevada mountains. Here, pristine meadows riddled with granitic rock and surrounded by the sentinel walls of the Snowy Range hold angling treasures that only the most motivated of fishermen dare seek. Guy Jeans, a 47-year-old California native, was smitten by these little fish more than a decade ago and has dedicated his life to the adventure of chasing them.

“There is not a more beautiful fish, period. People come from all over the world to get a glimpse of these trout, to hold one in their hands,” Jeans says.

“In 2002, I started backpacking in for them, beginning at a trailhead and walking through the Golden Trout Wilderness. It would take about two days to get there, and I’d typically fish for five to 10 days. I’d carry a 40-pound pack and my fishing gear. That trip isn’t for everybody, because you are going up some pretty gnarly stuff and down steep sides of the mountains. But you don’t just stumble upon golden trout,” Jeans says.

Once gold started rushing through his veins, he began to take friends along. “Eventually, one of my buddies asked why didn’t I become a guide. So, I did,” says Jeans, who also now owns the Kern River Fly Shop.

Luckily, anglers who want to join Jeans on a golden trout expedition (kernriverfly fishing.com) don’t have to backpack in. The Kernville, California, guide employs horses to get anglers and gear to a base camp that is a scant two-hour hike from the fishing grounds.

“It takes us about eight hours on horseback to get to our base camp. And we then hike to Little Whitney Meadow. It’s breathtaking when you arrive. It looks like a manicured park with a stream meandering through the middle,” Jeans says.

But it isn’t all fishing and gorgeous scenery. You don’t just have an eight-hour ride in—you also have to get back to the truck.

“Last July as we were heading out after an amazing trip, a crazy lightning storm hit. We were getting soaked to the bone when lightning started crashing all around us. Some bolts hit trees right above our heads. I couldn’t believe the horses didn’t freak out. Luckily, we made it back safely, but it was a close call.”

STREAMS OF GOLD
Golden Trout Creek is small, spanning just a little over 10 feet at its widest point. The water moves slowly and resembles what you’d find in an Evian bottle. And the trout are everywhere—and apparently they’re always hungry.

“The trout seem to want to thank you for making the journey to their slice of paradise. It’s almost a situation where there are too many fish. It usually doesn’t matter what kind of fly you throw—a little caddis or ant usually does the trick. We use little 1- or 2-weight rods and light line. You’ll lose count of how many you catch over a three- or four-day period.”

Anglers who make the monumental effort to find this creek are not rewarded with giant fish. The golden trout averages only 6 to 8 inches, with a 12-incher hitting trophy status. But size isn’t what matters here. The Siren of the Sierra hypnotizes as it lies in the palm. Six inches of spectacular makes a 10-hour horseback ride irrelevant—­lightning or not.

CERTIFY YOUR GREATNESS
If you are up to the challenge of catching a California golden trout, go ahead and take the next step—actually, the next five steps—to flyfishing glory. The California Department of Fish and Wildlife has created the Heritage Trout Challenge, where anglers who catch six different forms of native trout from their historic drainages will receive a certificate featuring the art of renowned fish illustrator Joseph Tomelleri. The document shows the species caught, along with dates and locations of each catch. Download the application here, fill it out, and return it with photos of each fish.