High and Dry for Mallards

Come out of the marsh for late-season greenheads. 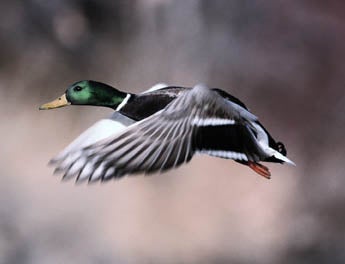 The morning chill sends shivers up and down your spine. You try to lie still and absorb whatever heat you can from the sun as it peeks over the horizon. The corn-stubble blanket you’ve woven over yourself seems complete. You survey the decoys one last time-everything looks right.

Suddenly you hear the whistle of wings. You roll your head to the side to catch a glimpse. A flock of greenheads, wings cupped, gently floats into your spread of mallard decoys. Mallards? That’s right, geese aren’t the only fowl to use fields, especially late in the year.

“Once the weather turns cold, mallards really start to use cut cornfields,” says Ohio duck-hunting guide Kevin Corry. “I’ve had some great hunts over corn, something that’s overlooked by a lot of hunters.”

Location is Key
To take advantage of this opportunity, hunters must be aware of several differences between field and marsh hunting, says Corry. At the top of Corry’s list is scouting. Much like geese, ducks feeding on corn usually are locked in on a particular field, even a particular location within the field.

If you set up in one field and the birds are working another nearby, your task of decoying the flocks will be extremely difficult, though not impossible. In a marsh the birds are far more accommodating.

Corry not only likes to identify specific fields and locations within those fields, but also keeps track of the direction from which the birds approach, how many times they circle before they land and which direction they move in once they’ve hit the ground. All of this information allows him to create a game plan specific to the circumstances.

Basic Plan for Decoying
When it comes to decoys, Corry likes to use shells with stakes, which give the decoys height, making them visible above the corn stubble. He also totes a few floaters just in case there is any standing water in the field.

Corry is hesitant to name one do-all decoy pattern for field hunting, as he firmly believes that you have to be willing to adjust spreads for specific conditions. However, there are two basic field patterns that he often employs.

[pagebreak] When birds don’t seem pressured, Corry likes a “bent-X” pattern. He sets his decoys in clumps or groups and leaves some open pockets rather than create an even line. He will set his blind near the middle with the wind at his back. If there is any standing water in the field he tries to set his spread so that the standing water is directly in front of him.

In a field where Corry thinks the birds have been pressured, he tries to “slide” the birds into his spread. To do this, he abandons the bent-X pattern in favor of the traditional U-shaped pattern. He positions his blind at the bottom of the U with the wind to his back. However, the blind is not centered. Instead, he offsets the blind so that the birds aren’t looking directly at him as they slide in.

In a marsh, it’s not uncommon to have small flocks, pairs or even single ducks work a spread all day. Expect fairly large flocks when hunting mallards in a cornfield; the birds are usually concentrated as well. High numbers of birds mean that many more eyes are scanning your spread, so every detail counts. Corry places his blind out of the sun if possible. It’s much easier to stay hidden in the shadows.

Calling: Less is More
Once your spread is set it’s time to close the deal. This is where a lot of hunters go wrong. Under most circumstances, field hunting requires less calling than during a typical marsh hunt. But less doesn’t necessarily mean quieter. The birds still have to hear you. “In an open field I’m more apt to use a call with a single reed,” explains Corry. “On a marsh you typically want a quieter double reed.” If you’re set up where the birds want to be, a few easy quacks or a chuckle is all that’s needed. Just let them knnow something’s alive down there.