When the timing is just right, all things seem possible for September elk hunting—probable, even. Bulls are practically screaming from... 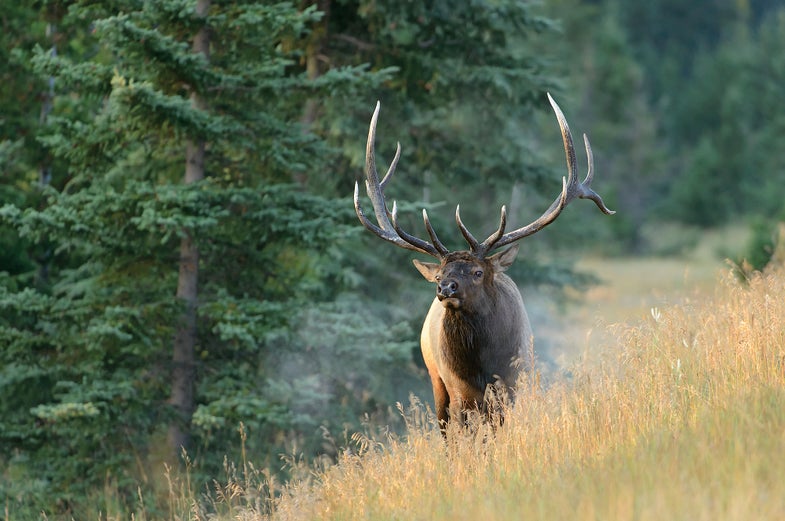 When the timing is just right, all things seem possible for September elk hunting—probable, even. Bulls are practically screaming from every ridge and hollow. It’s not a matter of whether you’ll hear a bull, it’s which bugle you should go to first.

Anticipation is high, and it’s simply a matter of time before you run an arrow through one of the brutes. Then reality sets in. The bulls don’t bugle on cue and September days begin to wane. October is here, and you’ve still got an unpunched archery tag. Now what?

In some elk-rich states, such as Montana, bow season runs into October, while others reserve this month for rifle hunters. If tagging a bull (or any elk) with your bow is a priority, you can still get it done. In those states where bow season is still open, you need to keep at it. In those where archery season has come to a close, you may be able to opt for a rifle tag, don the requisite orange apparel, and tote your bow instead of a rifle—just be sure to check the state regs first. Then, prepare for things to be tough—a change in tactics might be in order.

“It’s a totally different hunt,” says Colorado guide Miles Fedinec of October bowhunting for elk. “If I had a choice, I’d pick September every time. The bulls are so much easier to find because they’re vocal. But it’s far from the only way to hunt them. A bunch of the biggest bulls I’ve guided hunters to were killed later in the season. It can definitely be done. But it’s not easy.”

The key to scoring in October seems simple in theory: See the elk before they see you. “In October, it can feel like you’re just wandering around in the woods blind and hoping you run into an elk,” says Fedinec. “You can do that. But you’re going to have a lot more success if you see the elk long before it can see you. You have to get high and glass. That’s the game now.”

If you’re looking for an entire animal out in the middle of a clearing, you’ll likely be disappointed. Shapes, colors, or shadows that don’t look quite right are typically giveaways. An antler tip, a rump, or an ear may be all that you’ll see. When you spot something that looks out of place, study it some more in search of movement. But don’t give up on the rut entirely, especially if you’re hunting early in the month.

“Early in October, the rut can actually still be pretty good,” says Fedinec. “You may hear a little less bugling, but those bulls are sometimes a little more willing to come to a call because there are fewer cows in heat at that time. I definitely wouldn’t be afraid to call and use some rut tactics in early October.” But as the month fades, so, too, does the rut. “You’ll start to see those big, old bulls breaking off from the herds. They might be in bachelor groups, but a lot of times the biggest bulls are loners,” Fedinec says. To find them, you have to understand what they’re doing: Fueling up.

“They’re hitting the feed. They’re trying to recover from the rut and do whatever they can to get ready to make it through winter,” Fedinec explains. Start your search in areas of abundant food—think green meadows up high and agricultural sources down low. “If the cows are feeding in alfalfa fields or crops during the rut, you will often see the bulls come down too, and you can get on them that way.”

Another challenge to bowhunting for elk in October is hunting pressure.

“There are a lot of hunters out there in October—more than at any other time,” Fedinec says. “Rifle season is what most Western hunters live for, and they’re going to take advantage of it.”

Indeed, this can be the toughest time to be in the elk woods. The additional human pressure will drive elk into survival mode and into deep timber. It also causes them to become nocturnal. During the day, they will bed where they feel most secure—thickets, blowdowns, and dense spruces.

Is there an upside to October hunts? Easier access—maybe.

“It’s really weather-dependent, but if we start to see cold and snow, the elk will start to come down. It’s always easier to hunt them at lower elevations, and that can happen in late October sometimes.” The snow can serve as another major advantage as well. “Just old-school tracking in the snow can really be effective,” Fedinec says. “Find a fresh track and stay on it. Take your time. Use the wind. Be patient. I’ve walked up on a ton of elk doing that.”

Be aware, however, that elk can walk many miles in the course of a day, so it might take a while to catch up. If you find where elk fed during the night, follow them to where they entered the timber to bed for the day. Take up the trail cautiously and evaluate tracks for freshness. You’re looking for tracks with sharp edges with no debris in them. A fresh tracking snow in October may be just the way to punch your tag when the bugling dies.