The Best Time to Deer Hunt in Mid-October? When the Farmer Cuts the Corn

Struggling to get on a buck during mid-October deer season? Just wait for the farmer to fire up his combine 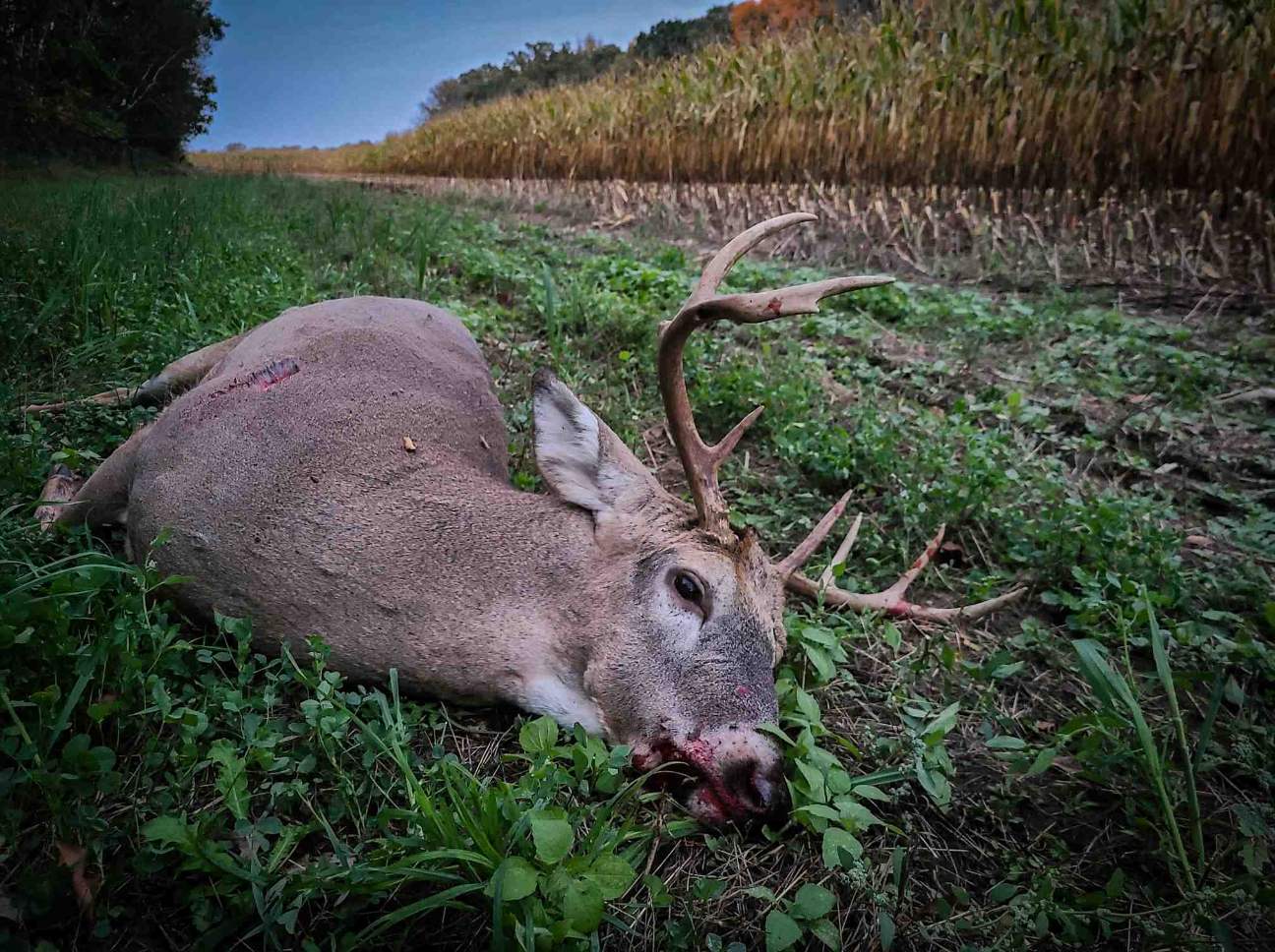 Sure, moon phases, weather, and photoperiod can all affect deer movement. But I’d argue that no factor has more impact on deer activity in a single day than an old John Deere combine mowing down a few hundred acres of standing corn. This is a good thing for deer hunters.

Mid-October can be a notoriously tough time to hunt. Even though the concept of the “October lull” has been debunked by scientific research, that doesn’t change the fact most of us bowhunters have a hard time patterning and killing mature bucks during early and mid-October. This is due to a few different factors.

When those cornfields come down, deer must adjust to the new landscape. And, the disturbance from the farmer’s combine preemptively sparks deer activity. Take last week for example…

My buddy Josh Dahlke, of HuntStand Media and I were hunting a property we lease in western Wisconsin. When we pulled up to the property, the farmer told us he was going to cut a few rows of corn around the field Josh intended to hunt near. We were equally bummed and excited by the news. No one really likes to sit in treestand watching a farmer drive laps around the field. However, we also knew that deer usually come out to feed after the cutting is over. They like to chow down on the waste corn, plus, I think they’re just kind of curious. Over three seasons of hunting the property, we’ve noticed an obvious pattern in our trail camera photos of increased deer movement after a corn cutting. Talk to any farmer or deer hunter who hunts around cornfields and they’ll say the same thing.

So, Josh snuck into a stand that’s tucked into the woods, 60 yards off the cornfield. I set up in a similar sort of staging area in the middle of the property. Josh watched the farmer cut corn for about an hour and a half, not expecting much to happen.

“I pray this is the final lap,” Josh texted me. Then: “I guess he opted for another round. I reckon I’m hosed.”

But then, not five minutes later, he texted one more message: “I just shot a deer.”

A nice buck had come to the edge of the field to steal a few cobs before the farmer made his next lap. When the farmer came back around the field, it spooked the buck into the woods—right to Josh’s stand. He made a 30-yard shot while the buck was still chewing on corn.

There are a few lessons you can take from this story. First, never give up on a hunt. If the wind is right, you’ve always got a chance. But, you’ve got to stay ready and stay in the hunt to make good on those chances.

Read Next: A Week-by-Week Guide to Hunting October Whitetails

Second, deer in farm country are very used to farm equipment. When a tractor or combine drives by, they typically bound into the woods just 25 or 50 yards. They don’t blow out of the county. Use this knowledge to your advantage when a farmer is cutting their corn. Hunt heavily-used trails leading from cornfields into the woods. Find those popular staging areas inside the woods that have fresh rubs and some scrapes. Those little spots can be more productive than the actual field edges. Also, you can use the times when a farmer is doing work to hang stands or set up trail cameras. The disruption that the farmer is making will help cloak the disruption you’re making. Do this if the farmer is working nearby (don’t bomb into secluded bedding areas at this time).

Lastly, always keep up good relations with the local farmers. They can often tell you more about deer activity than trail cameras ever could. If you can get the farmers in the area to let you know when they’re cutting crops and for how long, you’ll be one step ahead of the deer. But remember that a farmer’s plans are always changing (weather and machinery breaking down seem to change the schedule by the hour). You’ve got to roll with those changes like all the other variables on a deer hunt. But just be ready when you hear that combine fire up, better deer hunting could be on the way.