The environment of hunting camp definitely is a great place to foster friendships. Last year while hunting in Iowa I... 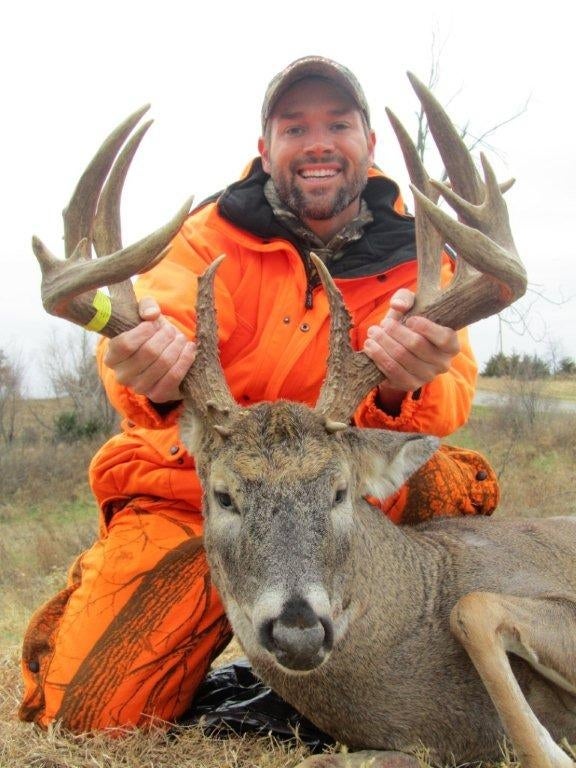 The environment of hunting camp definitely is a great place to foster friendships. Last year while hunting in Iowa I met Jade Webster along with his father-in-law and ever since Webster has been keeping me up-to-date on the hunting success he’s had on the land he owns and manages in northern Missouri along the Iowa border.

Webster’s goal has been to improve the deer hunting for trophy bucks and he’s undertaken an impressive food plot investment to boost antler growth. Plus, he’s implemented a rule of passing on bucks that are 3 1/2 years or younger on his property.

For year-round nutritional needs Webster has plots that include soybeans, corn, clover and a winter mix. This variety guarantees that deer will always have some browse available regardless of the season. In 2010 the management paid off big time for Webster.

On November 18, he was hunting in a 10-foot tower blind overlooking a 7-acre bean field. Doe activity on the field was intense so he knew that eventually a buck was going to be in the vicinity looking for an estrus doe. He reached the blind 30 minutes before shooting light and an hour later the field already had 10 does and fawns munching on the crop. Soon after Webster caught sight of movement on the edge of the timber and immediately knew the buck entering the field was a “shooter.”

He didn’t waste time. Webster slid his Remington .30-06 topped with a Swarovski scope to the blind’s edge for a steady rest. With the crosshairs planted behind the buck’s shoulder he pulled the trigger and the buck dropped on the spot. Ground shrinkage is always a possibility, but as he got closer to the buck he realized there would be none of that for this buck.

Webster’s buck sports exceptional mass and has 20 points that added up to a gross score of 175 5/8 points. This is his biggest buck to date and that spans a 25-year career dating back to when he started hunting at the age of 10. Incredibly, Webster scouts the property intensely with trail cameras, but this buck never was photographed prior to the shot.

Recently Webster also purchased land in Iowa and has started a small outfitting business to help pay for some of his whitetail addiction. If you’d like to learn more about his hunts visit www.boweboutfitters.com.