Back in June when I blogged about checking for soft mast on your deer hunting property, I added that the... 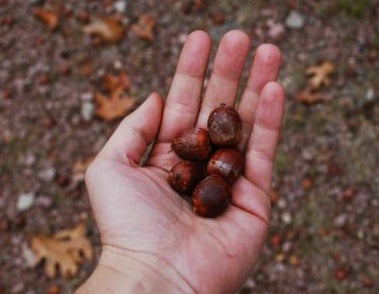 Back in June when I blogged about checking for soft mast on your deer hunting property, I added that the hard mast check would come later. That time is now. Acorns and other types of hard mast are now visible and it’s time to do some scouting.

Hard mast is primarily made up of acorns, beechnuts, walnuts, pecans and hickory nuts. Acorns are by far the most important hard mast crop species across the country. Even though about 75 species of oaks are found in North America, for hunting purposes we generally divide them into two groups: red oaks and white oaks.

Red vs White
It takes one year of growth to produce a white oak acorn and two seasons to produce an acorn from a red oak tree (reds mature the fall of their second season). White oaks can be irregular producers while reds are a little more reliable. The difference between a red and white oak are generally found in the shape of the leaves (reds have pointed lobes while whites have rounded lobes) and the color and texture of the bark (red oak bark is alligator-like and darker, white oak is rough, scaly, and a lighter grey color).

Both species are deer magnets and a sure bet for locating feeding whitetails. White oak acorns are sweeter (less tannin) than reds and are generally thought to be preferred by whitetails. Acorns are readily observable on oak trees now. A good binocular comes in real handy when scouting for acorns as they are often found in the upper reaches of some pretty tall timber. Red oaks often grow on moisture-laden flats while whites are typically found on drier ridges.

Acorns will begin falling shortly in most parts of whitetail country. A light crop will most likely be cleaned up in a few weeks, but a bumper crop can last well through hunting season and into the winter. Acorns are rich in carbohydrates and are a great way for whitetails to pack on the pounds for the approaching rut and winter.

Other Hard Mast
But acorns aren’t the only hard mast game in town. Hickory, beech, walnuts, and a few other nuts will soon be dropping and while not as widely distributed as oaks, whitetails will most certainly eat them. Beechnuts are very popular but not too widely distributed. Some nuts like hickory are hard to open and deer seem to avoid the hard shell varieties unless very hungry. I live on a hickory-lined dirt road where our pickups do all the shell cracking for them. They clean up the insides in a hurry unless the squirrels beat them to it.

Once you have identified a reliable hard mast source mark it on your map along with the soft mast you should have identified earlier in the summer. Pick out a tree or two where you can rig a stand and you will be in business when bow season rolls around and the mast is on the ground. So how are your mast crops–hard and soft–looking in your region of whitetail country. In the Northeast, we’re staring at a great year for soft mast and a spotty hard mast crop. Let us know.