When Ryan Lambert addressed a group of outdoors media folks at his Cajun Fishing Adventures lodge in Buras, La., his... 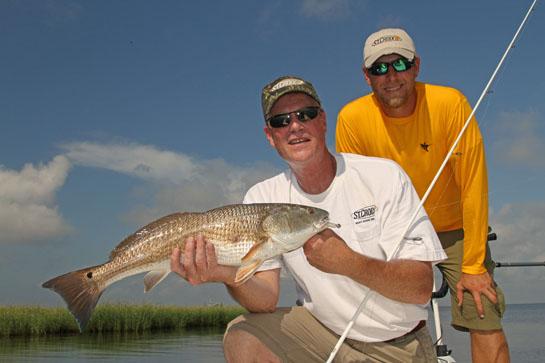 When Ryan Lambert addressed a group of outdoors media folks at his Cajun Fishing Adventures lodge in Buras, La., his impassioned speech on coastal erosion offered fresh perspective on an issue that has plagued the fish-rich Mississippi Delta since the river’s channelization altered its natural flow, blocked sediment dispersion into perimeter marshes, and allowed saltwater to creep progressively farther into vegetation that withers with increased salinity.

“Don’t think that just because you live up north in Green Bay, Wisconsin or Minneapolis, Minn. you don’t have skin in the game,” Lambert said of coastal erosion’s far-reaching impact. “A lot of those ducks you like to hunt spend their winters down here (in the Delta) and if they don’t have habitat to sustain them in the winter, they won’t survive to lay eggs in the spring.”

From those shallow duck ponds hosting pintail, widgeon, teal and the like to the labyrinth of cuts, bays and sloughs abounding with redfish, speckled trout and flounder, the Gulf of Mexico continues to gnaw away at a vegetated wonderland that simply is not rebuilding fast enough. For example, Capt. Cody Obiol ran me through open water where a smattering of marsh islands stood when I ran the same area just 5 years ago. Others in our group reported running across what the nav chart showed as dry ground.

Sadly, this is no rarity, as even electronic charts simply can’t keep up with the land loss. Probably the saddest commentary was Obiol noting that the names of several historically productive bays and islands have been permanently removed from NOAA charts.

“We (U.S. environmentalists) are worried about Brazil, but this is our backyard,” Lambert points out. “This is a special place and everyone has skin in the game. The time to do something is now – not later. We’re losing a national treasure.”