Matt Forjohn of Ambler, Pennsylvania holds the pending All-Tackle Length Record muskellunge he caught Monday. The fish was released. The... 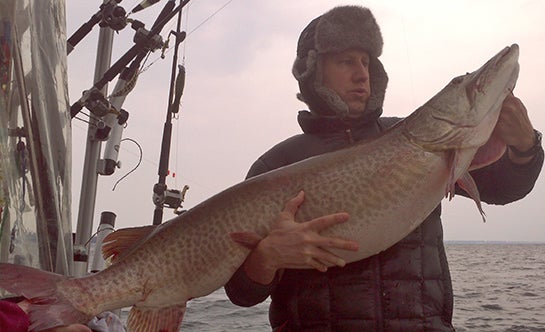 The third muskie that Matt Forjohn of Ambler, Pennsylvania ever caught is likely to put him in the International Game Fish Association’s record book as the holder of the All-Tackle Length world record.

The fish, caught Monday, December 2 on the St. Lawrence River out of Clayton, New York, was 130 centimeters (51.18 inches) long from its lip to the “v” of its tail on an official IGFA measuring device. That made it 2 centimeters longer than the current IGFA All-Tackle length record muskie, which Mark Edwin Carlson of Illinois caught while fishing the Ottawa River on the border of Toronto Ontario and Quebec in June of 2011.

Forjohn’s fish was released and swam away with vigor, according to Capt. Bob Walters, who had the angler as a charter client.

This muskie caught Monday on New York’s St. Lawrence River measured 130 centimeters from its lip to the “v” of its tail, which is 2 centimeters longer than the current All-Tackle Length Record recognized by the International Game Fish Association. The catch has been submitted for certification as the new record.

The fish hit a 12-inch prototype Swim Whizz lure in the Sunset Sally pattern, which is a paint job that resembles a walleye. It was trolled on a flatline behind Walter’s 31-foot Cherokee boat. The big fish hit in U.S. waters, just as Walters made a sharp turn near a shoal at Carleton Island, near where the St. Lawrence begins on Lake Ontario. Per IGFA rules, Forjohn was the only angler to handle the rod, taking it from the rod holder when the fish struck. First mate Darryl Raate netted it after a brief battle. The entire catch, measurement, photography and release were reportedly captured on a GoPro video camera.

“We submitted all the paperwork to the IGFA, and when they saw the picture we sent them they said it looked like we had the record,” said Walters. “Who knows, though? It’s pending.”

Walters said the Shimano reel used in the catch was spooled with 80-pound braided Tuf Line; the leader was 100-pound test Seaguar Fluorocarbon. Samples of both the line and the leader have been submitted to the IGFA. Walters said he has carried the IGFA kit to record a length-record fish since last year. Monday’s fish was the first fish Walters attempted to certify.

“That was the third muskie I’ve ever caught,” said Forjohn, who has chartered with Walters for four days after Thanksgiving each year for the past few. “I’ve caught a 38- and a 48-incher. I couldn’t believe it when they told me this one might be a world record–obviously there have been much bigger muskies caught and released, but Bob explained the whole IGFA certification process and this one measured a little more than two centimeters longer. We’ll just have to wait and see if it’s accepted.”