People are stupid. And arrogant. We believe everyone and everything thinks, acts and responds to stimulus the same way we... 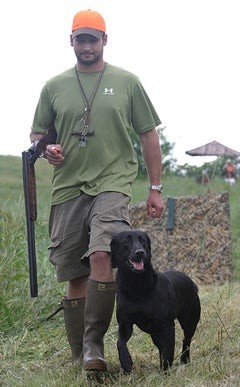 People are stupid. And arrogant. We believe everyone and everything thinks, acts and responds to stimulus the same way we do.

Don’t believe me? Watch a person with their dog.

There are very few hard facts and undeniable truths in dog training, but here is one (perhaps the only one):

They don’t. They don’t say a frickin’ word. They don’t have a clue what the words coming out of your small, human, non-butt-licking mouth mean. To dogs, words are just noise. We train them to understand what we want them to do by linking those words to actions. They’re just cues. “Sit” doesn’t mean sit to a dog anymore than “shuddup” does. It’s the fact that we link the action of sitting with the word “sit” that cues the dog to sit on the verbal command.

The best way to accomplish this in training is to wait until the dog performs the action and then give the cue/command word as they are carrying out the action. For “sit,” don’t give the command until your pup’s butt touches the ground. The instant it hits the ground say “sit” and reward the dog.

DON’T under any circumstance repeat “sit, sit, sit, sit” and then reward the dog. What have you taught him? That sitting on the fourth “sit” is rewarded, that’s what. Effectively, you’re teaching him to disregard your first three commands. If you’re teaching “lay down,” do whatever it is you have to do to get the dog on his belly, but don’t give the command “down” (or whatever you choose) until he’s in position. When heeling, reward the dog for being in the heel position and correct him when he’s out of position; don’t command “heel, heel, heel” without a correction when he’s bounding ahead of you. Make the correction and when the dog is in the proper area, command “heel” and reward appropriately (perhaps a treat or pet on the shoulder if he’s still learning, or verbal praise if he understands better).

Later, when your dog KNOWS the command and associated action, you hold him accountable for it. Don’t say “sit, sit, sit, sit” and wait for him to do it. Command “sit” once and then enforce it. “Enforcing” it might be as simple as pushing down on his butt or lifting up on his leash, or it might be something a little more attention grabbing like a pop on the rump with the heeling stick.

In his book “Retriever Training: A Back to Basics Approach”, Robert Milner writes about a stint of throat cancer that caused him difficulties speaking. He learned how valuable body language and small audible (not necessarily verbal) cues are to dogs. He challenges the reader to conduct training sessions with as little talking as possible.

It’s a great lesson and one I try to adhere to every time I take my dog out. Actually, it’s something I try to remember any time I’m around him…he has to hear my voice enough just during daily living, there’s no reason to fill his ears and head with more white-noise nonsense.

Watch the people you train with and notice how much they do or don’t talk to their dogs. How often do they repeat commands? When do they enforce those commands? Pay attention to how those repeated commands at six feet away play out as the dog is working. If the dog is constantly given repeated commands to “sit” and “heel,” I’d bet a dollar to a doughnut that most of those handlers have to repeat commands when the dog is working too.

Like Milner, I’d like to challenge you to conduct your next training session with as little talking as possible. Better yet, try getting to the point that you don’t have to give commands at all. Link your basic commands like sit, stay, heel and here to hand signals or body language.