Whether you’re a hardcore or amateur dog man, you need to join, donate or support, in anyway possible, the Sporting... 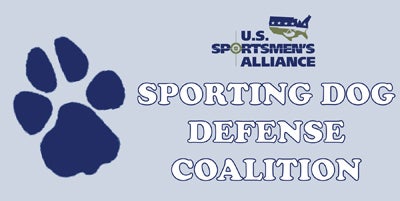 Whether you’re a hardcore or amateur dog man, you need to join, donate or support, in anyway possible, the Sporting Dog Defense Coalition, an arm of U.S. Sportsmen’s Alliance that evaluates and fights ambiguous language found in anti-hunting/animal-rights groups’ proposed legislation–legislation supposedly aimed at egregious violators of animal welfare. Often these bills can snare the use, breeding, training and even ownership of hunting dogs.

With the USSA’s legal expertise and state-by-state network of eyes and ears, they’re the sportsman’s, and especially dog man’s, first defense against anti-hunting/animal-rights legislative giants like the Humane Society of the United States. They’re also the second and third lines of defense in that they battle passed legislation in court and also take a proactive stance in the recruitment of new and younger sportsmen.

With their legal pen in upwards of 80 bills throughout 30 states last year alone, the USSA has been involved in everything from the New Jersey bear-hunting battle to defending hunting-license funded conservation dollars in California to a potentially precedent-setting trapping case in Maine to fighting to form cougar management plans via hunting on a National Wildlife Refuge in Arizona.

For gun-dog owners, the USSA’s Sporting Dog Defense Coalition is the primary funding tool used to fight onerous legislation of canine issues. They’ve been successful in killing or amending numerous bills throughout the country. Many of these bills are, or at least seem, especially to the general public, a means-to-an-end to stop puppy mills, hoarders, dog fighting and other abuses.

The problem is, the wording often (and in my opinion, too often to qualify for coincidence) is so ambiguous that it snares lawful pet owners, hunters, legitimate kennel operators and conscientious breeders within its legal, punitive and sometimes Draconian grasp. Take a look at many of the seemingly innocuous bills that could limit your hunting, breeding or training:

*Puppy mill campaigns: A nationwide campaign to end abusive, commercial breeding operations through stringent and burdensome standards of care. The problem is, the wording many times doesn’t differentiate between commercial operations and private sporting dog kennels or legitimate breeders. According to the USSA, as of April 1, 2010 there are 32 bills of this nature in 15 states.

*Mandatory spay/neuter: Couched as a way to reduce the population of stray animals and limit “backyard breeders,” these bills place restrictions, license fees or monetary penalties on those wishing to keep a dog intact. Legit breeders, pet owners, hunt testers and field trialers are all caught in wording and/or monetary restrictions. Currently there are two bills in two states, but these proposals continually crop up across the country.

*Tethering: Designed to prevent animal abuse, tethering bills often use language that prevents a dog from being left unattended for any amount of time if not in the owners line of sight. Forget about stakeout chains during training sessions or field trials if something like this passes. There are 21 tethering bills in 10 states right now.

Number of dogs: Meant to impose legal ramifications on hoarders and puppy mills, legislation mandating a limit on the number of dogs a person can own or board catches breeders, training kennels and even avid sportsmen in its wording. Want to run a pack of beagles after rabbits or several hounds for bears or cougars? If these laws pass, multiple-dog owners often have to jump through hoops or are classified as “commercial kennels” and must submit to licensing costs, household inspections and more.

*Time outside: In my opinion, these bills are often just proposed by stupid people. They might be well meaning, but that does nothing to alleviate them of their stupidity. Wording of these bills usually includes not only time outside, but are also accompanied by temperature mandates. If it’s below an arbitrary temperature, then dogs must be brought inside or provided shelter that must meet X, Y and Z standards. I understand providing shelter for your pup (in both heat and cold) but too often these bills are written by people that think like people. Dogs’ bodies work differently than ours and they retain heat differently. They don’t experience the cold in the same way we do. More than that, various breeds experience it differently; a husky is going to be loving life in 25 degrees and snow while a Mexican Hairless will be a Popsicle.

*Excessive kennel restrictions: Written to allow access to puppy mills, kennel restrictions/inspections open the door to local, state and federal government powers entering legitimate operators and breeders, often without due cause. Many times bills contain language that requires only an anonymous tip to be written and the governement can inspect a kennel. That would be fine if the puppy mills were actually being targeted, but what about the animal-rights whackos that would love to see a hunting-dog trainer or breeder shut down? They could harass them right out of business.

*Miscellaneous bills: Often written to ban the practice of ear cropping, tail docking or other cosmetics, they seem to address, for some at least, legitimate concerns of inflicting unnecessary pain. Sometimes, however, those “cosmetic” features actually do serve a purpose. I’d much rather humanely snip a dew claw of a young pup than to have him tear it off in the field when he’s older. The USSA reports that there are 28 bills in 14 states that deal with many of these issues.

Again, if you’re a hunter or dog man support and visit the USSA website regularly for news on the animal-rights/anti-hunting movement and to find out what action you can take.

The USSA has made staying abreast of issues important to you by creating their “Be a Sentry” program. It’s FREE and requires minimal info (name, state, zip code and email address). The program will keep you up to date on legislative issues they’re fighting or supporting in your neck of the woods.