I had to board the dogs this week and when I went to pick them up, I made a discovery... 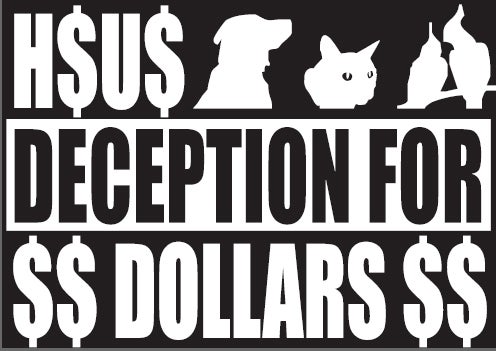 I had to board the dogs this week and when I went to pick them up, I made a discovery that might force me to change vets. When the girl went to the back to retrieve my Lab and bulldog, I perused the selection of magazines on a tabletop.

There I found the latest copy of the Humane Society of the United States member magazine. That means that my vet supports the largest anti-hunting/animal-rights group in the world. The address and member number on the mailing label confirmed it.

I have to draw a line in the sand. It’s a matter of principle over convenience, of business vs. beliefs. Hopefully, education and information wins out in the end.

When the nice girl brought my pooches to me, and she is very nice, I asked her about their support of HSUS. She didn’t really know anything about it, she said. That delegation of duties weighed on the shoulders and time schedule of a fellow named “Darryl.”

She was apprehensive and seemed somewhat confused. I quickly explained that HSUS is the largest anti-hunting and animal rights organization in the world and that less than one-half of one percent of their budget ever trickles down to local humane society shelters; those are strictly dependent upon local support.

The nice girl saw where this was going and didn’t want to step in a political landmine. She quickly said that “Darryl” would be the one to talk to, but that he’s out of town for the remainder of the week. He’d be back in on Monday.

So next week I will give “Darryl” a call and explain my issue with their support of HSUS:

I’m a hunter. I can’t support an organization or business that supports something so antithesis to my belief system; hunting puts food on my table both literally and figuratively.

If he’s the office manager, hopefully business acumen wins out over any belief or support he has for HSUS. I have spent more than $600 there between boarding, vaccinations and medical attention in the last three months.

If he’s under the impression that HSUS is somehow affiliated with local humane society shelters, hopefully a little education and information will do the trick.

I plan on arming myself with many facts and figures from U.S Sportsmen’s Alliance and HumaneWatch.org, among them:

I don’t know if any facts or figures will make a difference or not. What I do know is that I’ll tell him how much I enjoy coming to this group of vets (there are three or four in the office), how convenient it is (I can walk the dogs down), they reasonably priced and that their care of my dogs has been great to date.

Then I’ll ask him to end any support of the HSUS. While I thoroughly enjoy their office, there are lots of good vets around; many of which not only don’t support HSUS, but that do support hunting. Finding a new vet isn’t a problem.

I’ll suggest that he donate any funds intended for HSUS should instead go directly to our local humane society shelter. I’ll even match their donation (upto a “reasonable” price; I’m an outdoor writer after all and don’t have the financial resources of four vets!).

If none of that sways him, then I’ll thank him for the good care that the office has provided my pooches and I’ll get to work finding a new vet.

It might not seem like much, but if I can end one donation to HSUS, educate one person on their conduct/misrepresentation, then I consider it worth it and in a small, yes, very small, way have struck a blow to the largest anti-hunting organization in the world.

The line in the sand is drawn. I’ll let you know how it goes.