After sitting in the booth for my hometown for several days at a recent Sportsmen’s Show, both Kona and I... 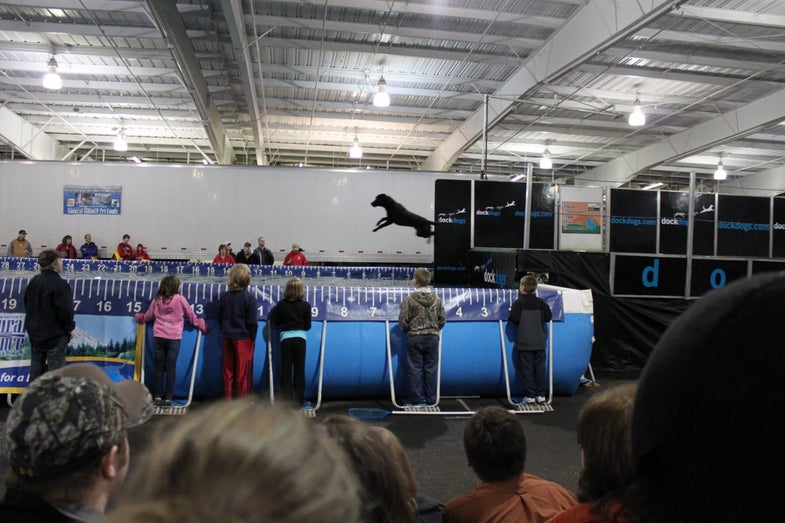 After sitting in the booth for my hometown for several days at a recent Sportsmen’s Show, both Kona and I had grown restless. That’s when I decided, partly as a means to escaping the endless jokes about Mega-Millions Lotto winners, who came from Ephrata, Wash., and partly out of curiosity, to enter Kona in the Puget Sound chapter’s Dock Dogs Big Air Competition.

I really had no idea how we would do, but I was confident Kona would jump even when the girl signing us up said that he might not (something that would reverberate through my mind during our practice round). The feeling when climbing onto the stage is the exact same as when you approach the line in a hunt test competition; butterflies swim in your stomach as people watch every move and evaluate not only your handling skills but your dog’s worth.While I usually don’t give a rip what most people think of me, I know Kona is a good dog and the limiting factor in his training and lack of titles has been my inexperience and inconsistencies. Ascending the stairs to the stage/dock, I became keenly aware of the eyes upon us; from Dock Dog veterans to judges to a fairly sizable crowd.

Kona didn’t care. His focus was on me and the bumper I had borrowed from some guy behind the scenes. Blocking out the small practice-round crowd watching us, I in turn focused all of my attention upon Kona. Just as when stepping to the line to run marks and blinds, you have to forget the judges and everyone else watching and get in sync with your dog. The problem was, when running a hunt test I’m confident Kona can do the work; here I had no idea what he would do or what exactly was the best approach I should take.

Do I put him on sit at one end of the dock and throw the bumper from the water’s edge? Do I walk Kona out, throw the bumper and take him back to the end and send him ala a memory blind? Should I try the prevailing Dock Dog method of sitting him and releasing him, only throwing the bumper as the dog nears?

I was still running through options when it was our turn to take our one and only practice jump. In the end I opted to take Kona to the end of the dock so he could get a very quick familiarization with the platform and entry height. Then I took him to the far end of the dock, put him on sit and walked back to the end. The plan was to throw the bumper just as I would when training alone with Kona and release him as if it was a mark.

After asking one of the staff to net the bumper for me, I tossed it again and released Kona. He tore down the platform and I instantly had visions of him launching through the air and landing in the water to great cheers.

Instead, when Kona reached the dock he put the brakes on and looked down at the water before jumping in. A few more laughs from the audience. Well this wasn’t going as planned and it would only get slightly more embarrassing.

I jumped back onto the dock, only faintly aware of the crowd’s giggles, focusing instead on just getting my mutt out of the water. Seeing me atop the dock, Kona came at me. I reached down and grabbed the skin on the back of his neck and pulled him up on the stage. Standing, I was nearly as soaked at my retriever. If not perfect, at least it was comedy relief for all involved.

Returning to the booth, both Kona and I drenched, all that kept going through my mind for the next several hours was: what have I got us into this time?

Looking on the bright side and trying to stay positive, I told myself that he was now familiar with the dock and exit ramp and the actual competition would go better. And it did.

In the end we used a bumper borrowed from a walleye guide I know and a tennis ball, which Kona absolutely loves, borrowed from a Dock Dogs veteran. I let him watch the first two flights of dogs jump to up his excitement and hopefully overcome any end-of-dock hesitations.

I tried two different approaches for Kona’s two competition jumps. First, I ran it like a memory. Taking Kona to the end of the dock, I threw the bumper (very conscious of the concrete support beam looming above) and heeled him back to the opposite end of the dock. Lining him as if for a blind, I released him with a loud “Back!” He had his best jump, 12 feet, and garnered some cheers and applause instead of laughter. Some of the pressure was released and this competition was becoming what it was meant to be: fun.

The second jump is when I borrowed the tennis ball. I put Kona on sit and tried throwing the ball like a mark from halfway down the dock. It was a lame throw, but good enough to try. I released Kona by name and he didn’t hesitate to jump. It was an 11-foot jump.

They weren’t great jumps, but they weren’t bad ones either. Some dogs, as the sign-up girl said, wouldn’t jump while others just sort of flopped off the end of the dock. The veterans, which included not only Labs and Chesapeakes, but also collies, goldens and even a pit bull, soared to lengths of 18- to 20-plus feet!

Having worked for ESPNOutdoors.com during the heyday of the Great Outdoor Games, I knew Kona and I would never threaten the world record of 28.10 feet but it sure provided a few minutes of reprieve from working a show booth, as well as some fun…and not just for the audience!