In the wake of Osama bin Laden’s assassination in Pakistan this week, the nature of elite military teams has captured... 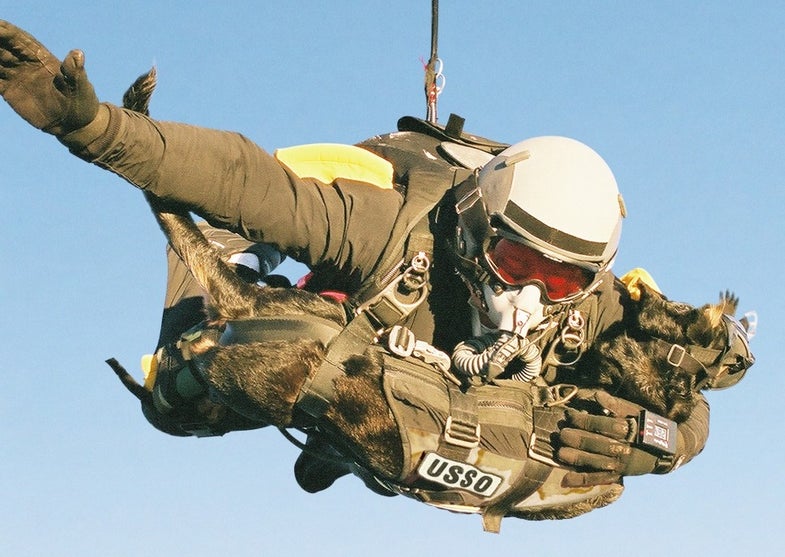 In the wake of Osama bin Laden’s assassination in Pakistan this week, the nature of elite military teams has captured the imagination of the public. We wonder who these brave, mysterious men are, what their daily lives are like, their families, training, etc.

The same sort of intrigue is taking place in the dog world. Canines have been used to detect IEDs at increasing rates in Afghanistan and Iraq, and that trend will continue and is a testament to the abilities of man’s best friend, but one dog in particular has now piqued the interest of many in the public: the canine that accompanied Navy SEAL Team Six in the raid of bin Laden’s compound in Pakistan.

In this piece by the New York Times, the training of commando dogs and their role in detecting IEDs and hiding insurgents, as well as more a more mundane question: what breed of dog was with the SEAL team? It’s a toss up between a German shepherd dog and a Belgium Malinois according to the article. If I had to guess, I’d lay my money on a Belgium Malinois.

While at a D.T. Systems seminar with George Hickox last year (where pros answered your questions), he mentioned some of the work that is being done by the Pentagon in regards to dogs. Different training techniques, timing, reinforcement and the like that the government is testing in order to improve the training and reliability of dogs and their handlers. As one of the few civilians that has been allowed to see some of the techniques and been privy to some of the statistical results, it was very interesting to hear his reports. In a more lighthearted moment, he mentioned that the baddest dog around was the Belgium Malinois. “The won’t just bite you,” he said. “They’ll try to eat you!”

But as smart, athletic and tough as the Malinois is, the Labrador retriever is very popular with troops. Just as the dual-purpose dog excels at quartering and flushing ahead of the upland hunter, Labs also work more than 100-yards ahead of patrol troops searching out IEDs.

In this story by foreignpolicy.com, not only is the dog at the center of the bin Laden story examined but the history of dogs in war is looked at too. The pictures themselves are worth a quick scroll through, even if you don’t read the fascinating history.

Of particular interest to me was the reclassification of war dogs. According to the article’s fourth slide: “Military working dogs (MWDs in Army parlance) may not enjoy all the privileges of being full-fledged soldiers, but the U.S. military no longer considers them mere equipment. (The war dogs deployed to Vietnam during that conflict were classifiedas “surplus equipment” and left behind.) Today, MWDs are outfitted with equipment of their own — a range of specialized gear that includes Doggles (protective eye wear), body armor, life vests, gas masks, long-range GPS-equipped vests, and high-tech canine “flak jackets.”

I remember a conversation with John Satterwhite, the former US Olympic champion shooter and current exhibition shooter, while at a seminar at Wildrose Kennels, on what really sent him down the shooting road. While he enjoyed shooting in high school and was a state champion, it wasn’t until Vietnam that he got really, really serious about it.

The impetus took place with his entrance to the Air Force during that war. “I put down that I liked to train dogs and got assigned to the canine unit,” said Satterwhite, noting that the survival rate of dog handlers was about 10 percent. “That’s something you never wanted to have happen back then.”

His former high school coach called his commanding officer and told him about Satterwhite’s skill with a shotgun. The officer told Satterwhite that as long as he could maintain a certain level of prowess with the firearm, he wouldn’t have to enter the canine unit and deploy to Vietnam. From that moment on Satterwhite lived at the range and practiced every shot he could imagine. As you can see by his biography, Satterwhite not only shot exhibition, but represented our country in the Olympics and taught our troops how to shoot better.

It’s nice to see that military intelligence isn’t always an oxymoron and that canines have been reclassified and are now given the deserved attention and respect as team members (check out picture slide 10; man and dog living in a pack at its finest). With results like these, however, I guess it’s hard to ignore the success, fiscal impact and the abilities of dogs:

“In October 2010, the Pentagon announced that after six years and $19 billion spent in the attempt to build the ultimate bomb detector technology, dogs were still the most accurate sniffers around. The rate of detection with the Pentagon’s fanciest equipment — drones and aerial detectors — was a 50 percent success rate, but when a dog was involved it rose 30 percent.”

If you’re looking for more war dog stories, check out this book: “Always Faithful: A memoir of the Marine dogs of WWII”. It looks like a very interesting read!