Gun Dog Training Tips: How to Stop Your Dog From Spinning

When a dog becomes stressed or wound up in training and hunting it will often lose focus or become confused... 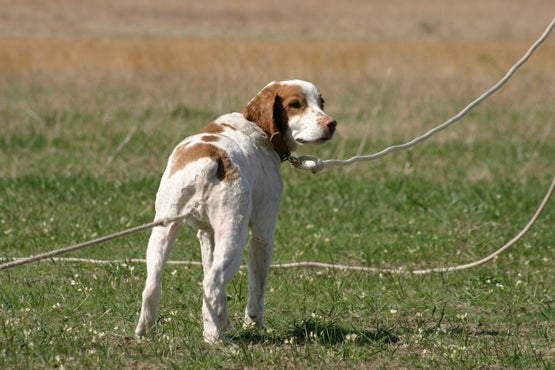 When a dog becomes stressed or wound up in training and hunting it will often lose focus or become confused as to the proper action to take in order to be successful. This mental “spinning” can take the form of frantic physical action, as in searching desperately for a bird or bumper, or the exact opposite – that being almost a withdrawing into themselves while they come to terms with what’s happening.

You’ll see both actions happen during training, such as when a pointing breed is on the whoa post for the first few times or when a retriever has begun to disregard the handler and begins to hunt for himself, or during hunting when the dog’s senses become overwhelmed by bird scent and the excitement of the hunt.

In almost all cases the fix is simple.

To bring the dog mentally back into the game and level-out his mental state, you simply do nothing. That is, you stop the dog and do nothing. Simply by stopping the physical actions of the dog and waiting for them to check down mentally, you can get back on the same page as your pup.

This will improve your training, getting the point of the lesson across to the dog faster, and will re-establish your control in exciting hunting situations.

“The ability to easily cue a dog to stop is invaluable. Not only can you get things shut down before they escalate out of control, but it is also similar to rebooting your dog’s computer. When things come unraveled, rebooting that computer allows your dog to catch his breath, regain his senses, and compose himself,” says Oklahoma pointing-dog trainer Ronnie Smith. “If you see your dog begin to unravel at the seams because of too much stimuli – birds, other dogs, guns, whatever – you can simply stop him. Cue him to stop and have him stand there until you see that “crazed” look in his eyes slowly fade away.”

The same can be said of retrievers on an upland hunt or when excessive handling or excitement has them searching frantically for a bumper or bird when running a blind. The overstimulation of the situation or lack of confidence in the handler leads them to begin hunting for themselves, which only serves to further undermine their confidence in the handler if they successfully find the bird/bumper and in themselves if they don’t – you’ll literally see their mind coming unwound via their body language; it will become a frantic, but cursory searching, of all possible locations. Everything else goes out the window, including listening to the handler, as the dog begins to focus solely on finding the object.

In addition to the “crazed” look Smith mentions, you’ll often see other signs: a deep exhaled breath and relaxing of the body is one sign, lip licking and yawning are a couple of others.

When introducing a new training drill or process (i.e., the aforementioned whoa post) that places stress on a dog, watch for these signs of acceptance before ending a training segment; this allows the dog to mentally process what’s happening to him, around him and how that all plays out in his mental consciousness.

Simply stopping the dog and making it sit until it calms down will refocus and balance their mental state and re-establish control and teamwork.