As a writer that passes along information, I’ve failed you. I’ve let two personal prejudices get in my way of... 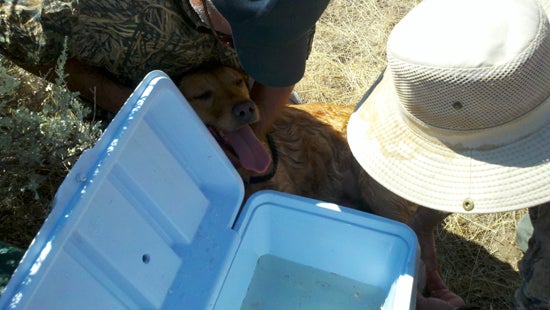 As a writer that passes along information, I’ve failed you. I’ve let two personal prejudices get in my way of passing along critical information, and I’m sorry.

The topic has to do with heat stress in dogs. Because, one, we seemingly cover the issue every year, I grew weary of repeating myself and, two, because the Pacific Northwest, unlike the rest of the country, has had an unusually mild summer, the heat didn’t impact myself or my dogs like it did the rest of you throughout the country, I let the vital information lapse.

This past weekend while participating in a retriever event here in eastern Washington, it got hot – with temps hitting the low- to mid-90s. The heat combined with the unique insulating properties of working dogs, and working they were, made for a potentially deadly scenario. Along with several other people, I was personally involved in helping cool two overheated dogs – and reminded that precaution and knowledge in time-critical situations are of utmost importance, regardless of the repetitive nature of the topic.

The picture here is of Pumpkin, a two-year-old golden retriever that overheated during a test. She had worked hard at trying to find the shot-flyer duck that was part of a triple mark, but she just couldn’t come up with it after picking up other birds. Trying hard and panting harder, the handler called her in. The club had water in a cooler under some shade and Pumpkin headed right for it upon returning to the line. On her walk to the cooler she stumbled and went down. Everyone rushed to her side and began putting water from the cooler on her and then icing her down, eventually we got her into an air conditioned truck and to a cool pond.

In a separate incident the following day, a 13-year-old black Lab that wasn’t competing went down. I’m not sure exactly what led to the situation, but when I got there the dog was already in the pond. The owners made comments of the dog having glassy eyes and having just collapsed.

We kept the dog in the pond and eventually brought ice into the equation, putting it on the dog’s stomach and inner thighs while continually washing cool pond water through its undercoat.

What really struck me was how fast the water around the dog heated up. After just a few minutes the water in direct contact with the dog was almost hot. We had to continually flush the area with fresh water to keep it acting as a heat sink. By absorbing the dog’s body heat and then being flushed away, replaced with cooler fresh water, the dog began to return somewhat to normal. We carried the dog to the cab of the truck and put the AC on it along with some more ice for a couple of minutes. Watching the dog and seeing that it was still somewhat lethargic and with some labored breathing, I recommended getting the dog to the vet. I don’t know if they eventually decided to go or not.

Here are a couple of things to keep in mind when watching your dog work – train or hunt (such as during the opening of dove season) – in the heat:

The mouth: Excessive panting and an extremely widened tongue that’s cupped at the end are initial indicators of heat stress. Take a break, get the dog some water and wait until things return to normal.

The gait: Watch how your dog is running, walking and following commands. A stumble or disregarded command might not be momentary misstep or stubbornness, but instead a display of physical and mental stress brought on by overheating.

The eyes: Glassy eyes in occurrence with physical or mental stress are a very good indicator that something is seriously wrong with your dog.

If you see these warning signs, cease exercise and start to cool your dog down immediately. Give them water, put them in cool water and then get them into an air-conditioned vehicle and head to a veterinarian. Once a dog begins to overheat, it’s a hard thing to stop and then reverse – and it will kill your dog very quickly.

On the other side of the coin, you have to take precautions when cooling your dog:

Not too fast: Don’t put an overheating dog immediately into an ice bath, as it can lead to shock. Instead, ease them into the cooling process. Cool water taken by mouth (not too much, however) and poured over the body, placement in cool pond with water continually flushed over the skin (get past that undercoat retriever folks!), and placing ice along the stomach, inner thighs, ears and other areas with high skin contact will help.

Not too deep: Don’t just turn your dog loose, even if it’s walking okay. If heat stress has set in, they could collapse again and if they’re swimming in deep water when they go down, you’re screwed.

Not too long: Stopping the climb of the internal body temperature of the dog and then reversing it is the main goal. Cool-to-cold water, ponds, ice, air-conditioning and the like all help get the process going, but as soon as it begins to take place stop administering it. Just as the dog’s body continues to heat as stress begins to set in, the internal body temperature continues to cool as it comes down. Too much of a good thing can lead to problems in the other direction and compound the stress on the dog and its internal organs/systems.

The best way to tell what’s happening inside your dog is to use a thermometer. If you don’t have one, use your best judgment but if you have any doubts get your dog to the vet as soon as possible.