Spinning-wing duck decoys like the Mojo Mallard have been a topic of much debate for about a decade now. First... 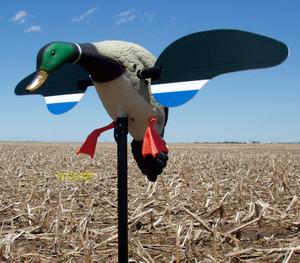 Spinning-wing duck decoys like the Mojo Mallard have been a topic of much debate for about a decade now.

First hailed at the silver bullet for educated ducks (and death on uneducated ones), then made illegal (because they were too effective) in many states, only to be made legal and illegal again and again.

I understand both sides of that argument. They can be very effective at giving incoming waterfowl the confidence to land because they add motion and realism to your spread. Is it an unfair advantage? Maybe.

But I’ve also heard many guides say that because they’re used so much, that birds have become educated to them and, especially in the late season, will cause just as many birds to flare as to drop in.

Here’s what I don’t get. In my home state of Washington, battery-operated equipment is forbidden. No Mojo Mallard. But, those operated with a jerk string or that spin in the wind are perfectly fine.

Maybe I’m missing something, but what’s the difference if the battery is causing the wings to spin or if I’m pulling a string and accomplishing the same thing?

Furthermore, daily limits are set on available resources, season dates, numbers of hunters and a plethora of other info. If I’m allowed to take a limit, what does it matter if I use a battery-operated spinning-wing decoy or one that spins due to the wind? A limit is a limit. Right?