While the reintroduction of the wolf in the West has garnered most of the political, judicial and media spotlight in... 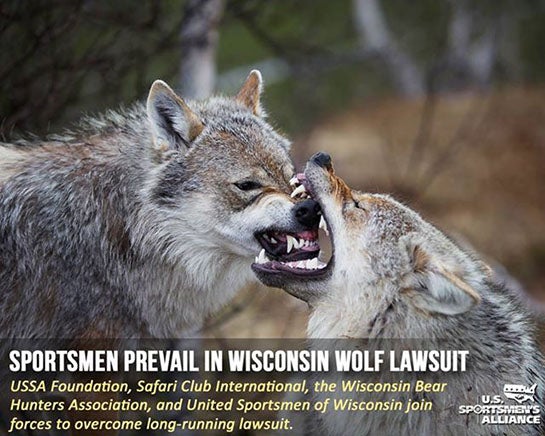 While the reintroduction of the wolf in the West has garnered most of the political, judicial and media spotlight in recent years, upper Midwestern states have been fighting wolf battles for more than a decade prior to their delisting in 2011. And management of the apex predator in Wisconsin just took a big step forward.

In January 2013, the Wisconsin DNR was sued by anti-hunting humane societies and associations. The US Sportsmen’s Alliance Foundation, Safari Club International, Wisconsin Bear Hunter’s Association and the United Sportsmen of Wisconsin intervened and filed to represent sportsmen’s interests in the case on behalf of the DNR. The coalition prevailed in Dane County Circuit Court when a judge issued a ruling that paved the way for wolf hunting with dogs.

However, anti-hunters, as they’re wont to do, filed an appeal and kept the ruling tied up in the court system. The appeal has been heard, and the antis were, ahem, shot down again.

According to a press release from the USSA, on July 10, the Court of Appeals issued a ruling stating that dogs can be used in the pursuit of wolves. It also made clear that hunters could also train their dogs to hunt wolves – which seems like conventional wisdom, especially when pursuing dangerous game, but, which in the extreme interpretation of laws perverted by anti-hunting organizations, must be spelled out and validated by a seemingly omnipotent, government-vested magistrate.

At the heart of the ruling, was the antis claim that the DNR didn’t provide enough restrictions around the hunt and use of dogs to keep the two species of canines from coming into conflict, thus breaking state laws of cruelty to animals (dogs presumably, but perhaps antis meant wolves, too). The appellate court rejected the anti-hunting group’s logic (or lack thereof, as per usual) and affirmed the lower court’s ruling – that sufficient guidelines, even invoked during an emergency situation, exist to legally hunt wolves, and that they can be pursued with dogs.

“This is a clear and decisive victory for sportsmen and the wildlife management process,” said Nick Pinizzotto, USSA president and CEO. “We’re extremely pleased the Appeals court sided with sportsmen and will allow hunters to train their dogs to hunt wolves. This sets an important precedent acknowledging that pre-existing rights to hunt and fish should continue unless those rights are specifically limited by laws or regulations.”

Wisconsinites can now get their pack of six or fewer dogs together and can pursue wolves (which sounds like an interesting and adventurous hunt), at least until the next challenge arises – which is a good reason sportsmen should join USSA; they’re the only group stepping up to fight anti-hunting zealots nationwide to protect and promote our outdoor heritage at the local, state and federal levels at both the ballot box and in the court system. What the NRA does for your gun rights, the USSA does for your hunting privileges.