Just in time for summer shooting, Winchester has added a 20-gauge Featherlite load to its AA shotshell lineup. Winchester AA... 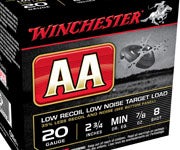 Just in time for summer shooting, Winchester has added a 20-gauge Featherlite load to its AA shotshell lineup.

Winchester AA shotshells are designed for a variety of sporting needs, from competitive shooting to just practicing at a range with friends and family. For reloaders, AA’s are made with the Winchester High-Strength Hull, which can be reloaded a number of times. AA loads use Winchester proprietary one-piece plastic wads, clean burning powder and hard shot for consistent pattern performance.

First introduced in 1965, Winchester AA shotshells have gone through a number of updates. In 2005, for example, Winchester AA began offering a special line of shells for sporting clays. And, it’s been nearly a decade now since Winchester introduced the High Strength Hull.

The new 20-gauge load is ideal for new shooters as the Featherlite load has minimal recoil and noticeably less noise than many loads. The Featherlite will also find use by Cowboy Action Shooters who can use a lower velocity load to shoot short-range popper style targets used in their cowboy “shoot outs.” The new load will also increase the lifetime of vintage guns used in cowboy action competition.