The sage grouse is perhaps the ultimate symbol of the American West. The iconic bird is inextricably connected to historic... 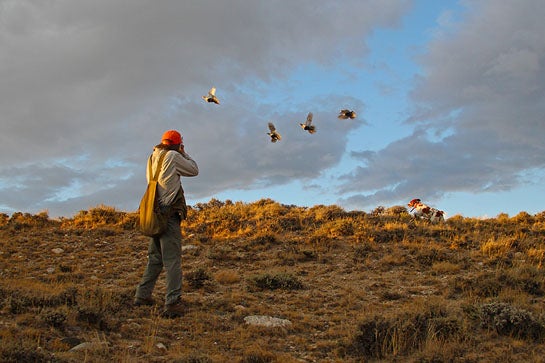 The sage grouse is perhaps the ultimate symbol of the American West. The iconic bird is inextricably connected to historic expanses of sagebrush that have since given way to energy development, agriculture, and heavy grazing. Greater sage grouse are a candidate species for federal protections under the Endangered Species Act. Studies are currently in place to determine if a threatened or endangered designation is justified. If grouse are listed, hunting would almost certainly stop throughout their range. While we anticipate the results of these studies, we can still enjoy sage grouse seasons in several western states.

Wyoming boasts the largest and most widespread populations of sage grouse. Estimates indicate the Cowboy State supports between 30 and 50 percent of the range-wide population.

Sage grouse hunting offers the allure of wide-open spaces and a chance to harvest of a unique species. These birds are pursued less for large bags than they are for the love of hunting, endless vistas, and good dog work. As a result, each bird harvested becomes a true trophy.

The North Platte River flows right through the middle of some of the best sage grouse habitat. This blue-ribbon trout stream has a reputation for producing big brown and rainbow trout. Two sections in particular stand out: the Grey Reef tailwater stretch and the “Miracle Mile.” In 1982 the Wyoming Game and Fish Department instituted a slot limit, which requires all anglers to immediately release fish between 10 and 16 inches. They also designated this area as a flies-and-lures-only stretch. The combination of these conservation regulations drastically increased the number of trout, with estimates putting the population at about 8,000 trout per mile.

Grouse season this fall runs from Sept. 20-30 in the western and central portions of Wyoming (Area 2). The northeastern region (Area 4) offers a shorter season from Sept. 20-22. Both areas set a daily limit of two birds with four in possession. The remainder of the state will be closed to sage grouse hunting.

While trout fishing in the North Platte is good from April to November, some of the best action goes down in September when browns, rainbows, and cutthroats are feeding heavily in preparation for the leaner times winter will bring.

Sage grouse hunting is generally more productive in the morning when temperatures are cooler. Scenting conditions for dogs are best in the morning as well. Depending on the weather, many hatches take place when the air and water temperatures increase. In September, this often occurs mid-morning and later. Therefore, I like to spend the morning hours walking the sagebrush flats for grouse. After a lunch break, I grab my fly rod and waders and head to the river.

Sage grouse hunting requires wide open spaces, sagebrush, and more sagebrush. This sea of sage conceals hidden springs, wet meadows, abandoned homesteads, and scattered grasslands. Virtually all sage grouse hunting in Wyoming takes place on public land. Sure, some birds use alfalfa fields where they meet sagebrush on private ranches, but they generally inhabit accessible lands administered by the Bureau of Land Management. The Casper field office of the BLM administers 1.4 million acres of public land. About 75 percent of this acreage is sage grouse habitat. Areas that hold good sage grouse populations include Bates Hole, the 33 Mile Region, and the area between the Rattlesnake Mountains and the town of Power River.

If you want to hunt grouse but find the prospect of navigating 1.4 million acres of public land intimating, seasoned guides who run quality dogs abound. They generally hunt the same BLM holdings but pack the advantage of local knowledge. Because let’s face it: they live there and you don’t. However, guides come with an additional cost. The cash you set aside to cover gas and salami for lunch probably won’t cut it.

The Grey Reef section forms the upper eight miles of the North Platte River below the Grey Reef Dam. This tailwater fishery is rich in aquatic life and supports wild rainbow, cutthroat, and brown trout. Public water on this section is limited to three access points: the Gray Reef Access Area right at the dam, Trapper’s Route No. 1, and Lusby Public Fishing Area. Fishing from a drift boat or raft is the best way to explore this area because there’s limited public water for wading. When floating this stretch, do be careful where you drop anchor or disembark. Wyoming state law states landowners own everything but the water your float on. Scuds, midges, and aquatic worms are prolific. Summer and early fall hatches include yellow stoneflies, pale morning duns, crane flies, tricos, and caddis. Many of the trout caught at Grey Reef fall in the 16-20 inch range with plenty of girth to boot.

With great dry fly fishing and fantastic scenery the Miracle Mile really has it all. Smashed between two huge reservoirs, Pathfinder and Seminole, this tailwater looks and fishes like a free-stone river. Depending upon Pathfinder Reservoir levels, float trips range between 5 and 12 miles. The Miracle Mile, coined by famous broadcaster Curt Gowdy on the American Sportsman TV show, courses past cliffs, through canyons and past boulders, still water, and swift runs with a back drop of sagebrush, cottonwoods, and ponderosa pines. Aquatic life is prolific and diverse. Hatches include giant golden stoneflies, caddis, pmd’s, baetis, yellow sallie stoneflies, and midges. Every year the Mile produces some truly amazing trout. Wyoming Game and Fish biologists electro-shock the Miracle Mile each year. Trout numbers hover around 3,200 fish per mile, and each year they shock brown trout that exceed 10 pounds.

Plenty of boot leather is required and a good dog, either a pointer or a retriever, will boost your odds of success. Sage grouse hunting in September can chill your bones or bake you alive under the autumn sun. So be prepared with plenty of water and dress in layers.While a 20-gauge works just fine, I suggest a 12-gauge to reach out on the sometimes wild flushing birds.

Bring either spinning gear or fly gear, or both. Don’t forget small spoons, spinners, and an assortment of flies like Leaches 12-14, Cream Caddis 14-16, Tricos 18-22, Hopper patterns, and various large streamers. There are situations for both floating and sinking tip lines, so use a 6 or 7 weight fly rod. Guided trips often include fly-fishing tackle and flies.

If you have some extra time, visit The National Historic Trails Interpretive Center. The Center is a cooperative partnership between BLM, the National Historic Trails Center Foundation and the City of Casper. Exhibits interpret the significant role of the area’s trails in U.S. history, and seek to promote public understanding of both America’s western Native American cultures and westward expansion.

Guided excursions range from $425 per day for a two-angler float trip, all the way up to $3,250 per person for three days and four nights of hunting and fishing adventure, complete with guide service, local transportation, accommodations, and meals.