UPDATE: Field and Stream reported that the potential world-record striped bass was caught last week in Connecticut. The striper was... 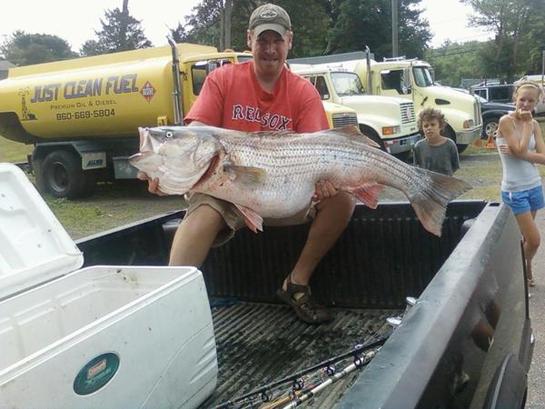 UPDATE: Field and Stream reported that the potential world-record striped bass was caught last week in Connecticut. The striper was boated by Greg Myerson and weighed in at 81.8 pounds, which edges out the previous record of 78.8 pounds caught in 1982 by Albert McReynolds.

It took Myerson 20 minutes to bring the fish to the boat. While the fight was short, it was furious.

“I couldn’t budge him at first,” Myerson told Field and Stream. “Then he took off on a real good run and I had to tighten the drag because he was burning line fast.”

As the story broke, several websites reported that the angler’s name was Al Stromski, however Field and Stream confirmed that the fish in fact belongs to Greg Myerson. There were also reports that Myerson had a panic attack and checked himself into a hospital after he caught the fish, but those reports also turned out to be untrue.

Of course, the record is pending and the catch still has to be certified by the International Game Fish Association. Myerson did weigh the fish on a certified scale in front of a crowd of witnesses.