One of Illinois’ longest-standing fishing records was recently broken by a 15-year-old angler who caught a walleye weighing in at... 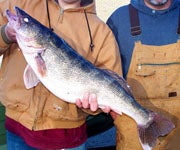 One of Illinois’ longest-standing fishing records was recently broken by a 15-year-old angler who caught a walleye weighing in at 14 pounds, 12 ounces.

Nick Tassoni of Rockford, Ill., started his fishing trip on the Pecatonica River with his father, Dave, at 5:30 a.m. Saturday. The two spent most of the cold January day trolling.

“I caught our first fish around 7 in the morning, but then we went five or six hours after that without even a bite. Yeah, Nick was complaining a bit,” Dave told the Rockford Register Star.

The lack of bites made Nick restless and he wanted to leave. Dave convinced his son to pick up his rod and continue fishing, telling him to take another troll. Nick listened and he had a hit a few minutes later. He thought he hooked a carp or buffalo fish, it wasn’t until the fish surfaced that he realized it was a walleye.

According to the Rockford Register Star, Dave netted the monster fish just before 1 p.m. and they rushed to get it weighed at a state-certified scale at Pinnon’s IGA Foods in Rockford. Officer Brian Alt from the Department of Natural Resources was called in to measure the fish. They were told that they had a potential state record fish, but they needed to get it certified by state biologist, Dan Sellee.

Unfortunately, Sellee would not be able to do that until the following morning. So, the father and son spent the whole night keeping the fish alive in a horse trough filled with river water, according to Wired2fish.com. Sallee went to them the next afternoon and certified the fish as the new Illinois State record walleye. The fish weighed 14 pounds, 12 ounces with 20.25 inches girth and 31 inches length.

It beat the previous state record, which stood for 51 years, by 12 ounces.

“I think that’s one day I’ll always be able to remember. That fish is just one of the special ones,” Nick told the Rockford Register Star. “When I was little, we used to go down there and my dad would joke around and say, ‘You might catch the record today.’ Well, he was finally right.”