Wolf-Dog on the Prowl in Philadelphia?

A wolf-dog hybrid is on the loose in Northeast Philadelphia. Maybe. The animal was first spotted by residents and visitors... 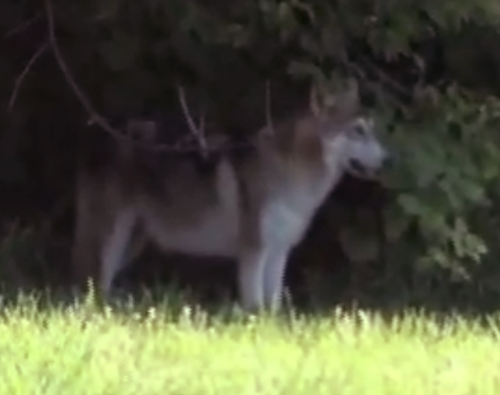 A wolf-dog hybrid is on the loose in Northeast Philadelphia. Maybe.

The animal was first spotted by residents and visitors to Pennypack Park a week ago. Reports to the Pennsylvania Game Commission went mostly uninvestigated, as authorities believed most eyewitnesses had actually seen a coyote. Once eyewitnesses started producing pictures of an animal that resembled a dog mixed with a wolf however authorities realized they weren’t looking for a yote.

Since then authorities have been trying to trap the animal to no avail. Perhaps trapping has proven unsuccessful because people have been throwing the animal food and trying to make nice with it — not something anyone should be doing in regards to an animal that might be at least half wolf. Come on folks! What are you thinking?

Officer Jerry Czech of the Pennsylvania Game Commission told 6abc.com the crowds coming to see and hopefully feed the animal aren’t helping anything. “The traps are set so we’re hoping it goes in there and we can live-trap it and remove it safely,” Czech said. “If we get too much of a crowd here and get too much of problem we’ll have to put it down and we want to avoid that if we can.”

As owning a wolf or wolf hybrid is illegal in Pennsylvania, many are wondering where the animal came from.

Check out the photo, do think this is a wolf, dog, coyote, or wolf-dog hybrid?