A bowfisherman landed his name in the record book this month after taking a 544-pound mako shark off the coast... 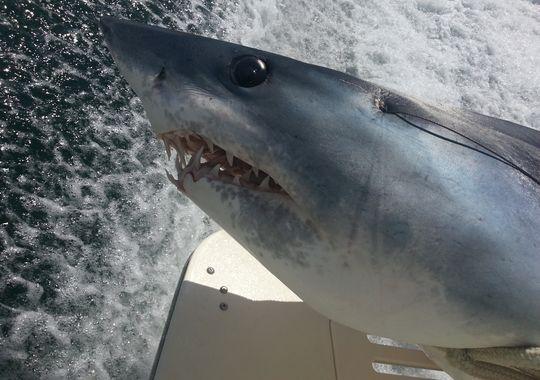 A bowfisherman landed his name in the record book this month after taking a 544-pound mako shark off the coast of Southern California.

“The mako is a very aggressive shark,” Eger told the newspaper. “They are not afraid of anything. He came in to where the chum is coming from and starts hitting the boat, ramming the boat, sizing up the boat.”

Eger took the leviathan with a broadhead attached to a rod and reel via 200-pound test line.

“Unlike a lot of ocean fishing, there’s no chair and you’re not strapped into anything,” Eger said. “I stood the entire time, and the only thing I was strapped to was the pole. If the shark pulls anything in, he’s pulling the pole and myself in.”

Eger’s fiancee, Cheryl Mabry, who was onboard to film the adventure added, “The most exciting part of the whole thing was actually watching that thing jump. He jumped about eight, nine feet up in the air, twirled in the air, then jumped again.”

Eger’s shark officially weighed 544 pounds, 8 ounces. The previous bow and arrow record for a shark was set in 1997 in Florida, on the books with the Bowfishing Association of America. That fish weighed in at 233 pounds, which Eger’s catch more than doubled.