The faint crescent of an elk print at the edge of the trail was what I had been walking for... 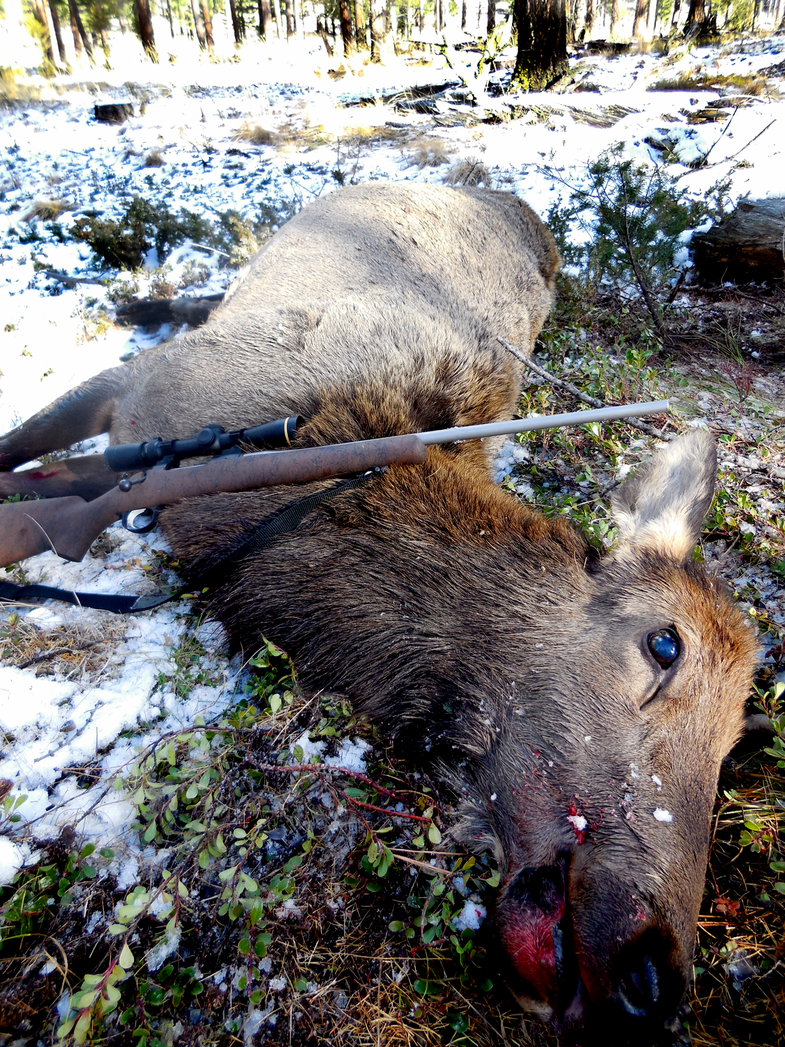 The faint crescent of an elk print at the edge of the trail was what I had been walking for a week to find. Tracks from perhaps six or eight more elk had nicked the frozen ground between clumps of bunchgrass. A long time ago my plan would have been to rush right ahead on the tracks. But the decades have taught me patience and braked my gait.

Late in the morning the elk were tucked into their beds for the day. I kept to the cover of rocks and the trees and every short way stopped to search ahead for the horizontal line of an elk’s back against the vertical forest. My binocular scanned across the sparse trees and past a bedded cow elk. My mind refused to believe what it had seen and I had to pull the glass back. Sure enough, an elk lay on a slight rise next to the wide trunk of a larch tree.

With the larch as a marker, I crawled behind one rock to the next into sure range. At the shot the elk’s long neck turned rubber and she slumped over in her bed. A scattering of more elk stood from their beds back in the trees and bunched up. They ran up the mountain when they saw me approaching.

Walking up, I looked several ridges to the north where my truck was parked. Please let it be a small cow, I thought. But it was a big cow, with a head like an alligator. Its ivories were like pearls and worn nearly even with its gums.

An afternoon of daylight remained. However, I was not 20 years old, but the old side of sixty. There was no time to waste. Yet I sat next to the elk for a while and thought about all my years of hunting elk, and how time was not in a tomb. Every week of every year was alive with ridges, building blue into the distance. Elk from the back of my mind and beyond appeared again to me, ghosts in the lodgepoles, antler tines glowing like lighted candles.

I started on the elk with the knife. The sun was well to the southwest when the butchering was complete. I started for the road with my daypack filled with one backstrap and chunks of meat from the neck and ribs. The walk was a leisurely stroll. At the truck I strapped on my pack frame. My rifle felt kind of heavy, but with splatters of blood on my pants and grizzly bears lurking, it escorted me on the return trip.

This time I tied a rear and front quarter onto the frame. That was a hefty load, but nothing I couldn’t carry years ago. With the bottom of the pack balanced on a boulder I sat and slipped my arms through the straps. Trying to stand, the pack pitched over backward. I floundered like an overturned turtle.

One hindquarter was a more sensible load. Bent over, I hiked up the pack and clinched the waist and chests straps tight. There appeared to be some mush around my waist.

The way out was fairly easy, with only a few uphills and deadfalls here and there. With my eyes focused on the ground in front of my feet, the climbs to the tops of the hills were steady, but slow. Maintaining balance and the lift to step over deadfalls, though, took the strength out of my step.

I made it back for the other hindquarter at sundown. Before leaving, I hung the remaining meat on the branches of a tree well away from the carcass. The wind settled at twilight and sighed with the night.

At the truck I sat on the ground. I rolled out of the pack frame. Lying there, I thought perhaps I would strap on my headlamp to hike back for the rest of the meat. In past seasons I would have. But caution and my legs countered. Not tonight.

I was back, nearly fresh, at first light. Magpies and gray jays pecked at the carcass, which was a safe sign. Still, I approached the meat with my .44 revolver in one hand and bear spray in the other. One front quarter and some extra pieces of meat were just the right weight. The pack out was fine. But my legs felt the pull on the walk back in.

The final load felt light. A spring was back in my step heading out. At the top of the first rise I stopped to look back. I savored the passage of the years, and then turned in anticipation of time to come.