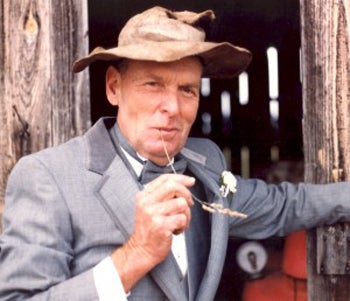 Each New Year’s Day evening for 10 years, my phone would ring–one of those few times when I’d actually rush to pick it up.

“How’s Jake?” boomed the voice on the other end. “How’d ‘The Man’ make out this season?”

Jake was my turkey-hunting dog and the anticipated call was from John Byrne of Lowry, Virginia. Mr. Byrne, or “Daddy” as he was referred to by some of his dearest friends, was Jake’s breeder. However, to say that Mr. Byrne was a breeder of turkey dogs is like saying that Ford makes trucks. Although some may argue the point, Mr. Byrne pretty much invented the turkey dog. His line of “Appalachian Turkey Dogs” do not have AKC certification (he never sought such a thing), but they surely have fall turkey hunter certification. His dogs, a mix of Pointer, Setter and Plott Hound, remain the most highly regarded turkey dogs on the planet.

For the uninitiated, hunting fall turkeys with dogs is a specialized–and incredibly exciting–form of fall bird hunting. In its simplest form, dogs cast about the fall woods in search of flocks of birds. Once located, the dogs rush into the flock and bark as they scatter the turkeys. Barking is key since it allows hunters to then find the break site and set up on returning birds (they almost always return to the break site).

“So how do I train this guy, Mr. Byrne,” I asked him after picking the tiny puppy up at the airport. “What’s it take to make him into a good turkey dog?”

“Just get feathers in his mouth,” Mr. Byrne responded. “Give him access to turkeys and the rest will take care of itself.”

Two days after picking the dog up, 3 adult gobblers had the misfortune of walking past my front door. Although the January snow had been plowed in the driveway, more than a foot covered the ground everywhere else. I carried the sleeping pup to the front door, put him down and off he went nose to the ground and tail wagging wildly. The gobblers, of course, had already hit the edge of the woods and were headed up the hillside, but Jake was in hot pursuit. Well, it really wasn’t hot pursuit because his short puppy legs didn’t do so well in the heavy snow, but it was most definitely a pursuit. Feeling sorry for the pup, I ended his first “hunt” after following behind him for several hundred yards. He was on their track the entire time.

Jake’s first real hunt came in the fall of that year when Mr. Byrne made his annual trip to New York’s Turkey Trot acres in Candor. My pup had shown great promise on summer training jaunts and I couldn’t wait for Mr. Byrne to see him in action.

Sadly, Jake was paired off with one of Mr. Byrne’s veteran dogs and hunted poorly as if he was intimidated. For several hours, I shared the woods with my friend, Mr. Byrne, with Jake never really leaving my side. Turkey dogs are supposed to range far and run fast. Jake was doddering along and barely interested. I was crushed and Mr. Byrne sensed it.

The words no sooner left his lips when “it” happened. With the other dog hundreds of yards out in front of us, Jake suddenly raced off to our left–20, 40, 60 yards. Then the barking started and turkeys flushed! Within a few minutes Jake was running back toward us–or rather back to Mr. Byrne.

“That’s my Big Man,” he shouted from bended knee, reaching for a dog treat while praising one of his protege’s. “THAT’S how you get feathers in your mouth.”

“Well, let’s get to setting up our blind,” he continued–tears trickling down his cheeks. “Jake did his job and now it’s time to do ours.”

I was in tears as well, as much out of happiness for Mr. Bryne as for Jake. He had invented another turkey dog. I’m crying today, too, hoping that Mr. Byrne and Jake get to roam the turkey woods together once again.