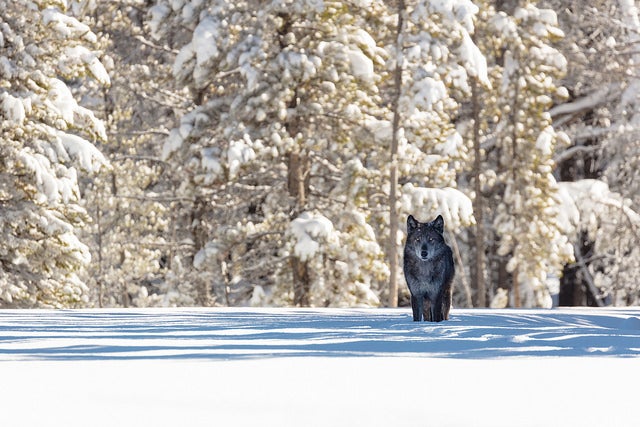 How many wolves are there in the Lower 48? It depends on who you ask. National Park Service
SHARE

In a surprise move today, the Biden administration said that wolves may need to return to federal protection because “increased human-caused mortality in Idaho and Montana may pose a threat to wolves in those two States.”

The Interior Department said that federal protections — which could include a return to endangered species status — are not required immediately, but the agency said that groups that had petitioned for additional protections had provided enough information to warrant a year-long review. That review, conducted by the U.S. Fish & Wildlife Service (FWS), could in turn warrant re-listing under the Endangered Species Act, an action that would end hunting, trapping, and state management of wolves.

The announcement follows the petition by some 70 environmental groups asking the Interior Department to intervene in wolf management after Montana and Idaho passed laws that aimed to aggressively reduce wolf populations. Some of the measures include expanding hunting areas and harvest and allowing night hunting and snaring along with mechanisms to compensate successful wolf hunters for expenses accrued during their hunting and trapping.

Yesterday, dozens of American Indian tribes asked the Biden administration to enact emergency protections for gray wolves, according to the Associated Press. The tribes say that states have enacted “anti-wolf” policies that present “a real potential of decimating wolf populations,” According to the AP.

READ NEXT: WHY THE WOLF WARS ARE GETTING MORE EXTREME

Up until this point, the Biden administration had stuck by the Trump administration decision to lift protections for gray wolves across most of the U.S.

The Interior Department didn’t detail what the year-long “biological review” will entail, but wolves across the West and Northern Great Lakes states are well above benchmarks established for their recovery. The review will certainly take into account how new and more aggressive regulations in Montana and Idaho affect wolf populations, but few sources think wolf populations will dip below those restoration benchmarks.

“The question for FWS is whether the wolf is at risk of extinction. It’s not,” says Tony Shoonen, CEO of the Boone and Crockett Club, which favors scientific management of the predators under state authority. “If it ever is, we will support the use of the ESA.”

Shoonen noted last month, when considering the Interior Department’s response to the relisting petition,  that FWS is required to look at populations and distributions anew, just as they did when they first listed the species.