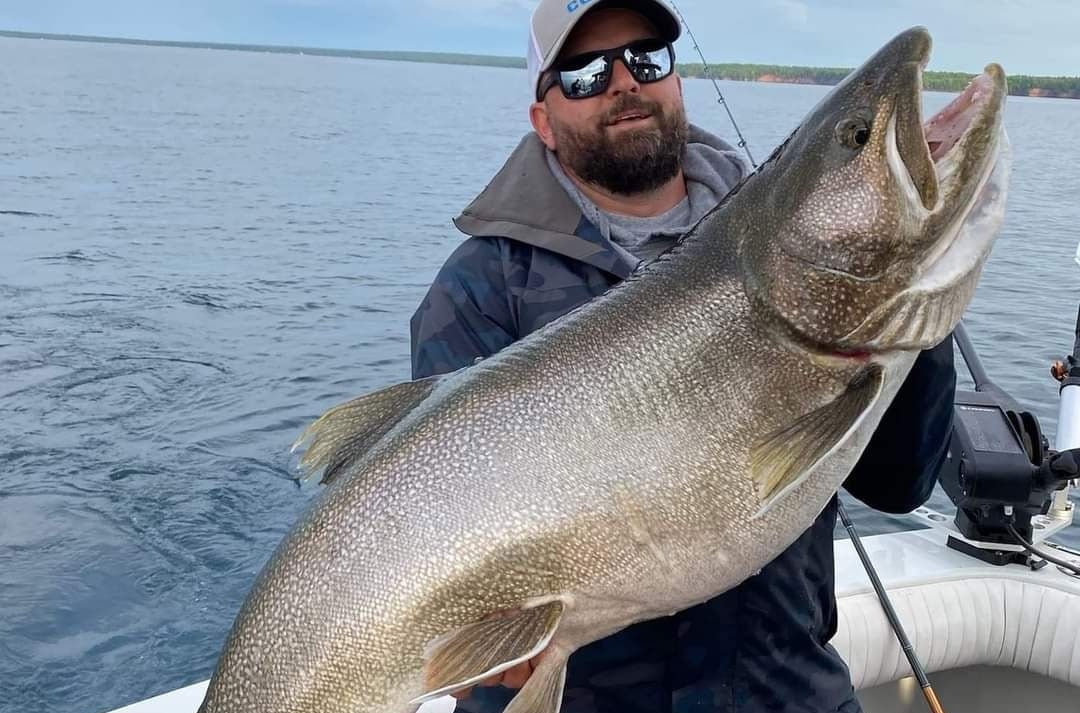 Chris VanEvera, 45, was was hopeful that he and his crew might win a salmon-trout tournament they’d entered on June 11 out of the town of L’Anse, in Michigan’s Upper Peninsula. It was a team event, and VanEvera was part of a five-person group of anglers fishing from their buddy’s 35-foot cabin cruiser, “Meet You There.”

“We were up and moving long before daybreak, and fishing early because Lake Superior is so clear and I expected an early bite from trout and salmon,” says VanEvera, an experienced Great Lakes angler and hunter from Escanaba.

They were trolling tackle with wire lines, planer boards and downriggers. About an hour after daylight a fish hit a trolled spoon off a planer board tracking to the side of their boat.

“The fish hit slow, and I thought we may have snagged something,” says VanEvera. “It took a few minutes to get the planer board into our boat, and when I did, and could feel the fish directly, I knew it was a good one.”

He settled into a slow and steady pump-and-reel fight, using an Okuma rod and reel, spooled with mid-depth running copper line. About 35 minutes later, VanEvera reeled up a lake trout most anglers can only dream about catching.

It was massive, with a belly so oversized it looked like it had been feeding non-stop on Lake Superior’s smelt population. The fish weighed a stout 38.15 pounds. That’s a trophy fish, but for context, it’s still well short of the Michigan state record laker, which is an incredible 61.5-pound fish caught from Lake Superior in 1997.

VanEvera says his huge laker hit a watermelon-colored spoon trolled about 45 feet down in a lake trough about 150 feet deep. They were fishing somewhere between Traverse Island and the Michigan shoreline in Keweenaw Bay.

VanEvera’s fish was big enough to win the tournament’s big lake trout award of $2,400 in the Baraga County Next Gen Team tournament.

He also has taken his impressive lake trout to North Country Legends taxidermy in Escanaba for mounting.

“The taxidermist, Tim Gorenghan, is going to have my laker aged, because they grow so very slowly in Lake Superior,” says VanEvera. “They think my fish may be about as old as me.”