It was a long boat ride, then a long car ride, to weigh the fish on certified scales, but a world record is the likely result for Justin Quintal 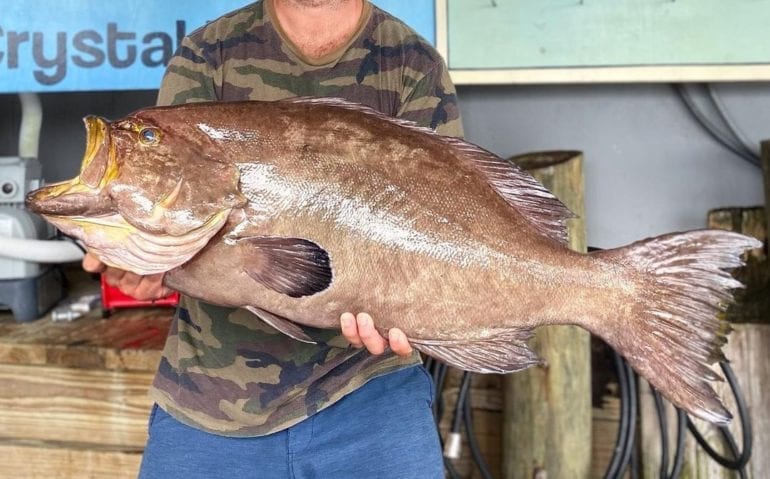 Justin Quintal of Jacksonville, Florida, is a name well known in the international surfing community. He’s the 2019 World Surf League long board world champion. And now he might be the new IFGA yellowmouth grouper world record holder.

Quintal caught a heavyweight grouper 60 miles offshore from Jacksonville late in the morning on June 25. But his quest for another world record was just beginning, reports the Citrus County Chronicle.

Quintal posted pictures of the big fish on social media, and learned that not only was his prize an unusual yellowmouth grouper, but it was so huge it could be an IGFA world record for the species.

After returning to shore, and getting input from savvy fishing friends, Quintal realized his catch—unofficially weighing 23.2 pounds-—could best the current IGFA world record for the species. That record is 22 pounds, 8 ounces, caught by Brian Ford on Sept. 2, 2001, off Murrells Inlet, South Carolina.

But Quintal needed an official IGFA weigh station with certified scales to qualify his catch as a record.

After frantic phone calls the following morning (June 26) he learned that Pete’s Pier Marina was an official IGFA weigh spot, and it was open. But it was in the town of Crystal River, Florida, 135 miles away and a 2.5-hour drive.

Read Next: How to Break a Fishing Record

So Quintal and pal Ali Quinn loaded the fish in a cooler, covered it with ice, and took off for Pete’s at 1:30 p.m. Saturday before the Marina closed at 5 p.m. They arrived 12 minutes before Pete’s closed for the day.

The grouper was weighed on certified scales at 23.2 pounds. A sample of the fish for scientific identification, plus other paperwork, have been sent to IGFA where it’s almost assuredly destined to be the new all-tackle record for yellowmouth grouper.