Jaci Skipper’s dad taught her well. Fish hard, believe in yourself, keep a red Rat-L-Trap handy and stay humble. The... 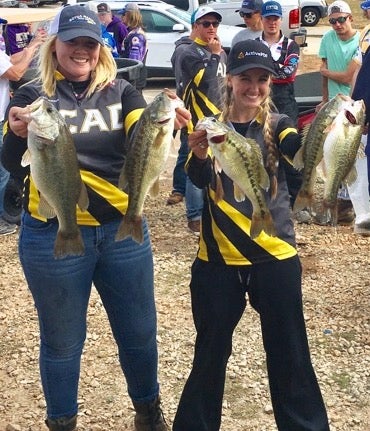 Jaci Skipper’s dad taught her well. Fish hard, believe in yourself, keep a red Rat-L-Trap handy and stay humble. The first three are easy, but give the girl a break — she deserves a little indulgence on the latter. That’s because, on March 18, Skipper and her Savannah College of Art and Design bass fishing teammate Ryleigh Tyson placed 14th out of 175 teams at the YETI FLW College Fishing Southeastern Conference tournament on Lake Hartwell.

A strong performance, for sure, but in doing so, the freshman duo became the first all-female team to ever qualify for the YETI FLW College Fishing National Championship. (The 2018 event’s date and location have not been announced.) Now, this is 2017, and it’s pretty clear that anyone should be able to compete wherever and whenever they choose. But, numerically speaking, fishing remains a male-dominated sport. So yeah, this is a big deal. And so is the backstory.

Skipper came to SCAD with plenty of experience. She grew up fishing local tournaments with her dad, John, who actually started a fishing club at Rehobeth High School, where her 15-year-old sister Laney currently competes. Skipper fished the first two conference events on Lake Seminole and Lake Guntersville with two different partners and blanked both times. Nevertheless, she entered the Hartwell event undaunted by a less-than-encouraging season.

“This is a humbling sport and you’re going to lose more than you’re going to win,” she said. “This year has not been going as planned. I’ve lost two transducers and I’ve had a lot of bad luck. But that’s just part of fishing.

“I can’t believe (our championship qualification) happened this year with Ryleigh and me both being freshman. But since it has, all I can do is thank the good Lord above.”

“As long as you give 110 percent and keep your head down, you can do just about anything in life,” she said. “My dad always told me to give it your all and if it’s meant to be, it’s meant to be.

“One of his pet peeves that he always told me growing up was be humble. No matter how good you do, it’s how you present yourself and humble you are.”

We see shades of Skipper’s grounded belief in the post-collegiate game plan.

“I’m probably going to work for somebody for two or three years and then try to open up my own business,” she said. “I don’t know what I want to do business-wise, yet, but I do know that I want to come back to my hometown of Dothan, Alabama and help my community in any way that I can.”

And that red Rat-L-Trap? Skipper recently used one to catch her personal best — a 9-pounder on the lipless crankbait while promoting team fishing at a Savannah high school’s private pond.

Talk about making an impression.