How to Catch a Bluefin Tuna for Christmas

In December, bluefins smash topwater baits, and you can even see Manhattan from where you're fishing 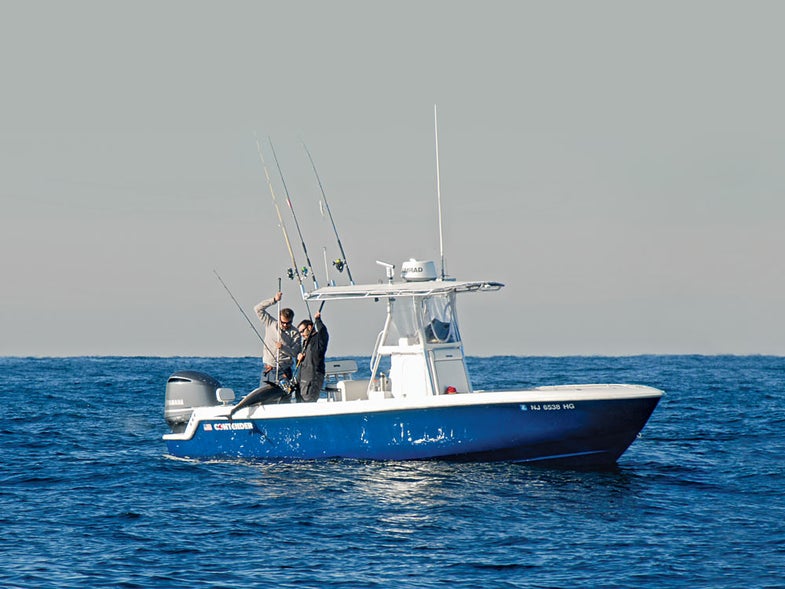 A crew of "ghostbusters" lands a late-season bluefin off the New Jersey coast. John McMurray
SHARE

Way under-gunned, we chased tuna around for two hours before one exploded on a topwater bait. It took that long again to land it—and that was one of the smaller fish. We were ecstatic.

That was well over a decade ago. What was something of a surprise to us has since evolved into a fairly consistent near-shore December fishery, at least for a handful of hearty adrenaline junkies fishing the New York Bight.

Yet, it’s anything but easy.

Locals call these bluefins “ghosts,” because no one knows precisely when or where they will appear, or how long they will stay. These are presumably migratory fish that are making a push south from Maine and Massachusetts, where they spend their summers—and feeding heavily on 6- to 9-inch sand eels, herring, and mackerel along the way.

“They always come past here,” says New Jersey captain Gene Quigley. “Whether or not they stay and we get shots at them depends on what sort of bait concentrations we have here.”

Best guesses are that they will show from late November into January, in 70 to 100 feet of water, anywhere from Fire Island, N.Y., to Point Pleasant, N.J. Where specifically, though, is impossible to pinpoint. The first indication of their arrival is typically a report or two of late-season striped bass fishermen getting inexplicably spooled by a mystery fish. While anglers try to keep information of the late migrators to themselves, the news inevitably leaks out via word of mouth, internet message boards, Facebook posts, and VHF radio. Monitoring these sources and having a flexible schedule to take advantage of weather conditions is critical. It’s a sight-fishing game once you hit the water. Let diving birds, frenzied schools of baitfish, and busting tuna be your guide.

The behavior of these tuna is somewhat ghost-like, too, with fleeting unapproachable, inconsistent sightings, a few popping here and a few popping there. They are often very boat-shy and sound when you get close.

“Getting shots can be difficult,” says Quigley “You’ve got to really refine your approach and come in upwind, up-feed. Only a few captains know how to do that right.”

Birds are always helpful when hunting down these ghosts. Bluefins will push sand eels, half-beaks, or whatever bait they are chasing to the surface, and gannets, seagulls, or terns will be there to take advantage. Sometimes you’ve got to cover a lot of ground, but even just a few high-flyers can indicate the presence of bluefins.

“The top guys try to anticipate where they are going to show by tracking birds,” says Quigley. “Look for the birds high in the sky circling and following, then get in position and wait.” Captains who can do that can actually fire off a cast just as they are coming up, rather than trying to catch up to them. Then you’ve got to get them to eat.

“You can forget about trolling,” says Sami Ghandour, owner of Saltywater Tackle. “That puts them down right away. For better or worse, it’s all adrenaline-laced, run-and-gun casting with spin gear.”

It helps to have the right plugs. There are dozens of tuna-ready topwater baits on the market. These strong through-wired lures are now made specifically for this kind of fishing. Poppers are great, but there are times when they won’t touch one. In fact, most of the time they will only eat stickbaits.

“You’ve got to fish them super slow,” says New Jersey captain Adam Sherer. “We’ve had days when we’ve had numerous shots but not even a look. Tuna can be super picky, particularly when they are on small bait.”

With a sweep-and-stop retrieve, stickbaits dart and dive erratically. They can also be worked slowly to stay in the strike zone longer. Japanese stickbaits, from 5 ½ to 9 inches, account for many ghost catches each season. At $20 to $250 each, they are pricey, but they’re sized to imitate small baits, have great action, and are tough enough to withstand the punishment of a 200-pound fish. Popular models include the Shimano Orca, Smight Baby Runboh, Tackle House Britt, and Daiwa Dorado Slider.

Lastly, you’ve got to deal with the weather. And in the Northeast, it generally is not good in December. Not only is it a cold month, but it’s also a windy one.

“There are very few windows,” says Quigley. “You’ve got to be ready to jump on it when you get the weather.”

Of course, every once in a while it all comes together—a good weather window, lots of fish pods feeding aggressively under birds. Yet even then, it can take several dozen shots or more into feeding fish before you get one to eat.

“But, wow, man, once they do grab that plug? It’s game on,” says Sheerer. “Drag-burning runs that you better be ready for.”

Only a handful of anglers are consistently successful on late-fall fish. Technological advances in spinning gear that allow anglers to put significant pressure on incredibly strong, fast fish well north of the 100-pound mark helps greatly. Ghost fishing demands spinners with drags that can apply pressure up to 50 pounds; 60- to 100-pound-test, small-diameter braided line; and 7-foot 6-inch to 8-foot rods that are light enough to throw plugs far all day yet still pull up fish from the deep without breaking.

Although no one has quite figured out why the ghosts of December will aggressively crash baits one day and then seem uncatchable the next, pulling your topwater plug through a pod of big feeding fish and having a bluefin explode on it makes an impression. What ensues is a hard, often long fight, back spasms, and high fives. When it happens in December, that success is even sweeter. Pulling the boat for the season can wait just a little bit longer.

Editor’s Note: Boats targeting bluefin tuna must have a NOAA Fisheries HMS permit. They are available at hmspermits.noaa.gov.