Two brothers, who guide hunters for a living but rarely get to hunt together, tag a buck of a lifetime 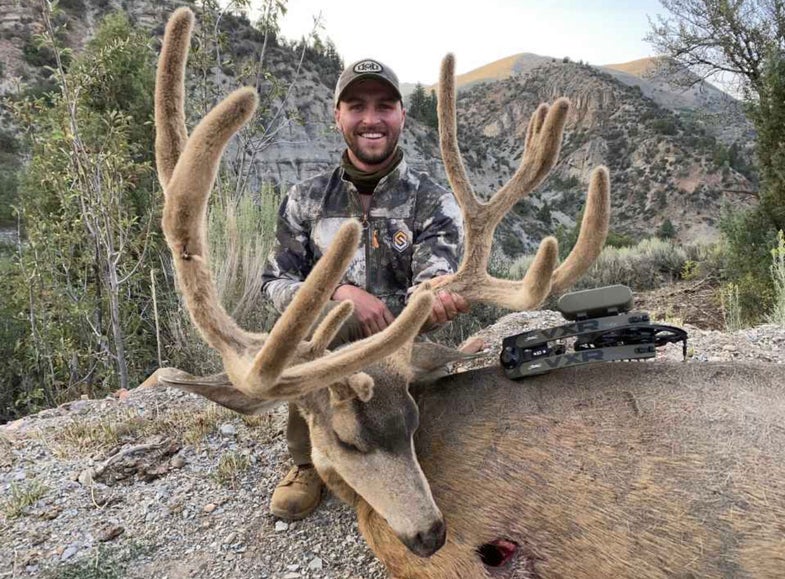 Austin Land lives to guide and hunt mule deer. The 29-year-old has guided for 10 years on a private Utah ranch for Wild Country Adventures with his brother, Colton. He also married into one of the most famous deer hunting families in America: The Drurys. So Austin knows a great buck when he sees one. On July 31, Austin, his wife Taylor Drury, and some friends spotted a velvet buck that was truly special. The deer was huge, with a unique spread and wide rack. Austin knew the deer had plenty more antler-growing time to develop an even larger rack before bow season opened in late August. So he focused on learning the buck’s patterns ahead of the opener. They nicknamed him “Gear Head.”

“During the final week leading up to season opener [on Saturday, August 21], I spent every morning and every evening glassing where we had seen Gear Head during summer,” says Austin. “But the last five times I glassed for him, I never saw the deer and started to  lose hope.”

On opening day, Austin and Colton sat on a high ridge the entire day, glassing for the buck at the same spot where they regularly watched him during the summer. At about 6 p.m. a blustery mountain storm began building. The hunters were ready to head back to camp when they spotted Gear Head.

“We put a quick game plan together looped around the deer [to get favorable wind and cover] and started our stalk,” says Austin. “It took us 35 minutes to slip to 50 yards of him and another buck feeding in sage. We decided to sit and wait for him to move our way, figuring he was going to come down to a stand of trees as soon as the storm hit.”

But as the storm closed in and the sky got dark, the brothers decided they needed to stalk closer or lose their opportunity on the big buck. They got to 38 yards of the feeding bucks and Austin was preparing to shoot, when suddenly the wind picked up and a lightning bolt struck nearby, startling the deer.

The buck panicked and ran, fleeing straight toward the hunters—then stopping at just seven yards when he spotted the two brothers. He changed course and bolted toward a large stand of trees, where he disappeared.

Austin and Colton figured they’d probably never see the buck again. They searched for him almost the entire next day and never saw Gear Head. Until, at the last bit of light, they noticed two bucks that Gear Head hung around. The two deer were heading into a big, aspen-filled canyon—a place they’d seen Gear Head previously. The Lands decided to set up high on a hill overlooking the spot the next morning.

“It didn’t take long that next morning for us to spot Gear Head and seven other bucks,” Austin says. “[They were] feeding near the canyon aspens toward some thicker cover to bed at mid-day. We knew the deer liked that cover for food and water, and we decided to slip down toward them [to] set up and hope for an opportunity.”

They moved to 150 yards of the aspen cover, easing along and trying to find the buck, when Colton whispered to Austin, “Freeze.” Austin looked over his shoulder and saw Gear Head feeding in a tangle of aspens less than 10 yards from them, leading a herd of seven other bucks.

There was nothing the brothers could do but hold perfectly still. At six yards the deer spooked, but not as bad as two days before. This time they ran only about 100 yards into another thick stand of aspens. The brothers snuck to within 45 yards of the bucks, which were bedded down and offering no shot. They waited 90 minutes and, when the bucks finally rose, they ambled straight away and over a hill top, offering no bow shot.

The brothers looped around the bucks several times, trying to cut them off in the thick cover. But each time they tried this maneuver, they were foiled in the same way: The cover was too thick for a shot, the deer meandered away, and the brothers had to set up another stalk. They’d get within 50 yards, but never could get a good shot at Gear Head. Finally, they spooked the deer and the game was over until the next day.

The next morning found the brothers on a ridge, glassing for the bachelor herd. When they finally spotted the mule deer, they were scattered throughout a lower canyon. The eight bucks had broken up into pairs and trios. And sure enough, Gear Head was down there too.

After several more fruitless stalks, Austin and Colton chose a spot to wait for the buck to show. But after 6 1/2 hours, they decided to slip into the aspen stand and try to pinpoint the big buck. They located the bucks and, at one point, got within 18 yards of Gear Head—again with no shot. Again they looped around the deer, started a stalk, and then spotted them at 40 yards, with some open shooting lanes through cover.

“The moment I’d practiced and waited for all summer was finally here,” Austin says. “I moved another five yards forward to put the buck in an opening, I ranged him at 35 yards [while he was feeding] broadside. Just as I moved my feet to settle down for a shot, I stepped on a limb that snapped.

“Gear Head turned, looking right at me. I froze, praying. But after a 30-second stare-down, he calmed down, started feeding, and I drew my bow, put my sight pin on his chest, and released the arrow.”

Austin watched his arrow disappear perfectly behind the buck’s shoulder. They found bubbly blood on Austin’s arrow, but waited 30 minutes before trailing the buck.

“As we were sitting there waiting to go track him, I was glassing the direction he ran, and suddenly spotted a tan body with a hole in the side, laying and not breathing,” Austin recalls.

All while the last hunt and stalk were taking place for Gear Head, Austin’s wife, Taylor, and their friends had been watching through binoculars at about 600 yards. She witnessed the deer racing away after the shot, and saw where he had crashed.

“What an incredible hunt to have my brother behind me with a camera, with Taylor and  great friends watching the hunt unfold,” Austin says. “These are memories to last a lifetime.”

“Mule deer are my passion and to be able to take such a beautiful buck is an absolute dream come true. I could do this every day of my life…God bless mule deer.”

They estimated that the buck was more than 6 years old, with a body weight over 300 pounds, and a green-gross score of just over 201. Incredible video of the hunt is available right now on Deer Cast.