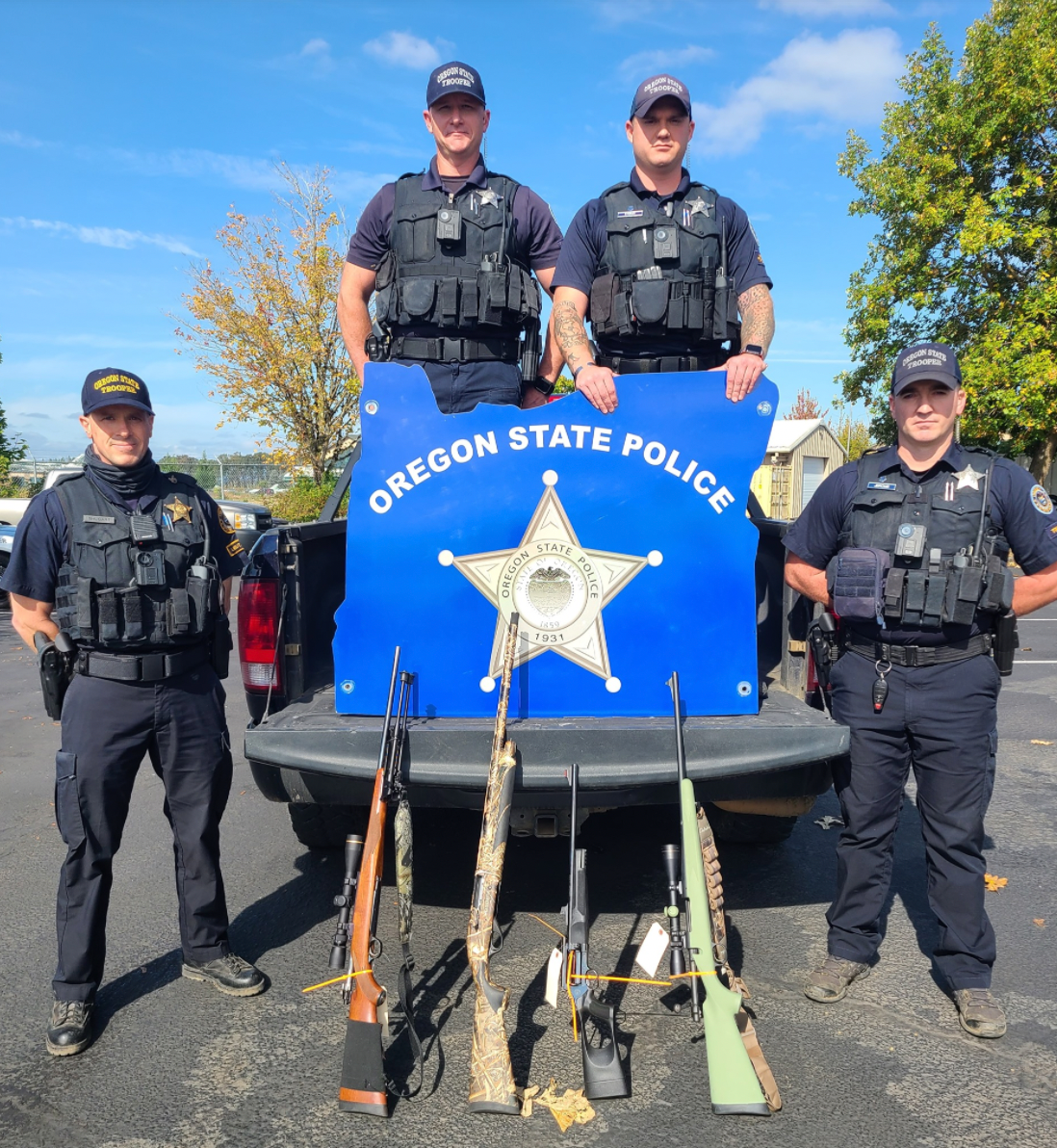 Darkness was already starting to fall in Yamhill County, Oregon, by the time the troopers set their trap and got situated in their squad cars. Hidden from the nearby highway in a patch of evergreens, the two officers stared patiently through the windshield, eyes fixed on a stationary blacktail buck. Most of the motorists driving by were unaware of the deer that stood just off the highway, and those who did happen to notice it had no idea that the animal was actually a taxidermied decoy.

It was Oct. 2, the opening day of Oregon’s general deer season, and the two troopers—members of the Oregon State Police’s Fish and Wildlife Division—were taking part in a classic poaching sting operation.

It didn’t take long for the stake-out to pay off. Just 30 minutes after legal hunting light ended, a vehicle slowed on the public roadway and someone slipped a rifle barrel out of the passenger-side window. The shooter fired, only to watch in dismay when the deer stood motionless as a mannequin. That’s about the time the troopers flipped on the blue lights.

Meanwhile, the same scene was taking place in neighboring Washington County, not far from the metropolitan area of Portland, where another pair of troopers were posted up near another deer decoy. Altogether, the two pairs of troopers apprehended four subjects who fired shots in four separate instances. In each instance, the subjects were charged with a Class A Misdemeanors and had their rifles confiscated.

Poaching stories like this one in Oregon, while nothing new, have grown increasingly common of late, with several stories making headlines in recent months. There was the 44-year-old man sentenced this February after shooting a trophy bull elk out of season in Crater Lake National Park. (As it turns out, this was only one instance in a string of egregious poaching violations that occurred between 2014 and 2016: Authorities later discovered text messages that he had sent in which he bragged about killing 24 elk in the same national park over the same period.)

Another troubling string of violations was revealed with the bust of a poaching ring of three men who wreaked havoc on wildlife in the Coast Range for years, unlawfully taking a number of deer, elk, black bear, cougars, and bobcats. These men were also victims of their own hubris, as authorities eventually uncovered a series of incriminating text messages in which they bragged about the game they had poached. Their spree came to an end in May of last year, after one of the suspect’s ex-girlfriends cooperated with the local police department.

And just last week in Clatsop County, which neighbors Washington County and lies on the south side of the Columbia River, an urban poacher was brought to justice after multiple local residents contacted authorities and provided a detailed description of the crossbow-toting suspect. After he was apprehended, the 25-year-old suspect, James Lee Ogier Jr., confessed to shooting two deer with a crossbow inside the city limits of Astoria. His crossbow, spotlight, and night-vision goggles were all seized as evidence.

Read Next: Tuskless Elephants Are Evolving at a Rapid Pace Thanks to Ivory Poachers

Yvonne Shaw works for the Oregon Department of Fish and Wildlife as the campaign coordinator for ODFW’s Stop Poaching Campaign. Referring to the number of statewide poaching violations in recent years, she says it’s not necessarily that poaching is occurring more frequently, but that public assistance and engagement are playing a bigger role in protecting the state’s natural resources.

“It might seem like poaching is on the rise,” Shaw tells Outdoor Life, “but what strikes me is that there hasn’t really been a significant increase. What has changed is that we are engaging the public in learning how to recognize and report poaching.”

One of the things that has helped incentivize the public in recent years is the Turn In Poachers program, which offers cash rewards for information that results in the apprehension of a poacher. The program is a collaborative effort between the OSP, ODFW and the Oregon Hunters Association, which provides funding for the program.

The OHA has listed on its website standard reward amounts for members of the public who cooperate with authorities. Information related to bighorn sheep, mountain goat, and moose, for example, could fetch a reward of $1,000, while information about elk, deer, and antelope poaching could be worth $500.

According to statistics provided by the OSP, a total of 324 known big game animals were harvested illegally in 2019, and that number grew to 417 known poachings in 2020. With these figures in mind, Oregon authorities will continue to pursue poachers by any means necessary, even if that means leveraging taxidermy deer dummies, text messages, and disgruntled ex-girlfriends.

To report a wildlife or habitat violation, or suspicious activity in Oregon, you can email TIP@state.or.us or call 1-800-452-7888.