A slow black bear hunt turns potentially deadly when not one, but two bears charge. Even after that, the hunters aren't out of the woods yet 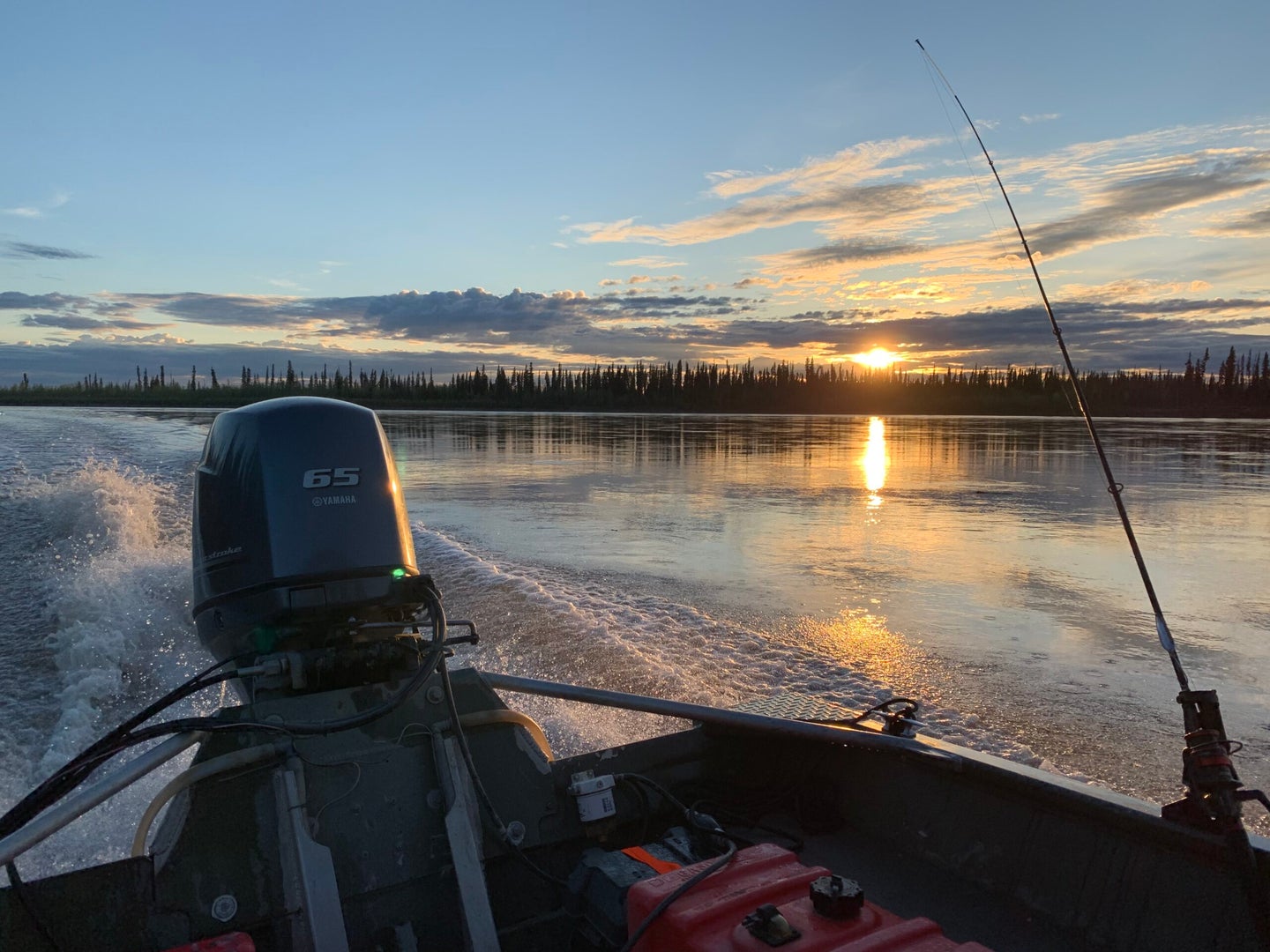 By Frank Schultz, as told to Tyler Freel

If he puts both paws on the tree, he’s getting shot. I’m not dealing with this shit, I thought to myself as the black bear looked up at us, his small, dark eyes impossible to read. The boar had been huffing, popping his teeth, and swatting at small spruce and alder saplings since he first saw us sitting in our tree stands.

In a nervous display of would-be dominance, the young boar made a show of himself, and he ended up at the base of our tree where he was obviously considering climbing up for a closer look. We really didn’t want to kill the bear, but two paws on the tree, that was my line. From where he sat, his head was only 8 or so feet off the end of my 50-caliber muzzleloader. I knew that when they decide to climb, black bears can bound up a tree in a hurry. And considering his behavior, I wasn’t going to give him the chance.

Some might have considered it a sign that we should re-evaluate our plans, but the high, fast water in the river didn’t dissuade us. Early in the spring, after the ice breaks up and flushes out of interior Alaska’s rivers, the water levels rise as snowmelt drains from the vast landscape that is waking up from a long winter. With the high and swift water comes trash—or debris—that is picked up and washed downriver. Logs, sticks, and seemingly endless slicks compromised of leaves, twigs, and pieces of tree bark slowly wind their way downstream. Running a jet-equipped outboard motor in the stuff can be difficult to impossible, as the debris tends to clog up the jet pump.

Despite the high, debris-filled water, we headed out shortly after the river ice broke to set bear baits. This was a trip we’d done before—usually with six of us and three boats. But due to scheduling conflicts and some boat issues, my long-time buddy Rob and I were at it by ourselves this year. Our plan was to motor fuel and bait to bear camp—a 6-hour run on a good day—so we could set baits, stash gas cans, and do some fishing. We’d return a week or so later to hunt after the baits had some time to soak.

We started out heavy—too heavy—and our pace was painfully slow. We knew that with too much weight or an unbalanced load, our boat couldn’t get up on step, but we figured we could burn off enough weight in fuel to balance out the boat and then we’d be on our way. The water conditions weren’t helping though, and the debris in the water clogged the jet pump so often that it felt we weren’t making any progress.

Too stubborn to turn back, we decided to stash some gas and excess bait, which we planned to pick up on our return. It took us twice as long and twice the normal amount of gas, but we eventually got to camp, set baits, and made our way back. To top it off, the fishing was disappointingly slow.

It takes a tremendous amount of effort and planning to make these trips happen, and we had high expectations when we returned to the baits we had set. (The previous season, five of us had killed a dozen bears there in two nights.) When we got to the first bait, all the food was gone. We fully expected/had hoped for that, but our excitement was quickly eroded when we saw that the trail camera we’d painstakingly positioned up in a tree—to avoid having it destroyed by a bear–was gone as well.

We checked our second bait site, which was located off the edge of an oxbow, about 15 yards beyond a near-vertical, 15- or 20-foot-tall silty bank. As soon as we pulled up in the boat, I was relieved to see the camera, still high in its perch on a spruce tree. While I checked the camera, we could hear bears breaking limbs and making all sorts of racket back in the woods—an eerie but encouraging sound.

Wolves, black bears, and grizzly bears had all been on the bait—in an almost constant stream of traffic. In a week, the camera had captured over 1,400 photos, and it was overwhelming to try to sort through them while the bears made so much noise in the background. Rob really had it out for a color-phased black bear, and although we didn’t see any in our photos, we remembered that we had taken several from the first bait we’d checked. We decided to go back and hunt that one, and we planned to return the following night to hunt here.

We hunted that evening—and most of the next day—at our first bait, but only saw one small black bear. We must be too late, and the bears probably moved on after running out of food, we thought. We moved our tree stands to the second bait, and after climbing up that tall cut bank, we hung them in a large spruce tree right above the boat, about 15 yards from the bait. That’s when the young, disproportionately agitated boar decided to show up. “I got one like that last year, let’s see what else shows,” Rob said. We nearly had to shoot that bear on account of his behavior, but he eventually sauntered off.

Finally, exhausted, we left. We had just enough gas to come back and retrieve our tree stands in the morning and maybe hit a fishing hole before calling it quits, so that’s what we decided to do.

We returned around noon the following day, and after tying the boat off to an overhanging alder, I grabbed my card reader and .300 WSM—because it’s foolish to check an active bear bait without a rifle. I put my Thermacell in my pocket and started climbing up the steep slippery bank. As I’m trying to keep my footing in the soft ground, I hear papoom papoom papoom papoom. I look up—my head still below the level of the bank—and I see two ears. The bear was above me, and the sound I heard was him running straight at me. “There’s a bear right in front of me. That asshole from last night” I said to Rob, not taking my eyes off the bear’s ears.

He started popping his teeth, and I took a couple steps to gain elevation and get to a point where I could see him. “Hey! Get out of here!” I yelled. He was about 20 feet way, but when I yelled at him, he lunged towards me, covering another 5 feet. I looked through my scope and could see part of his head above the bank. I yelled again and he pinned his ears back. This is not good, I thought. Then he started running at me, and Pow! I didn’t even look through the scope again, I just pulled the trigger. He disappeared as the recoil sent me sliding down the bank. I chambered another round, ran back up the bank, and he was laying 6 feet from where I was standing. I’d hit him right in his open mouth.

As Rob was climbing up behind me, I saw that this wasn’t even the same bear. This boar was much bigger than the one we’d seen the night before. I was stunned, still processing what had happened. I couldn’t believe this bear had just charged me.

After a few minutes, the shock and adrenaline had begun to wear off, and we started taking some photos. As I sat with the bear, Rob was taking photos when I noticed another bear in the brush, 20 feet behind him. “Oh shit, behind you Rob. Get your rifle now,” I said. The other bear was coming in hot. He was thrashing trees, huffing, and making short runs at us.

“Shoot him right in the chest,” I told Rob as the bear paused just a few yards away. Rob’s .30-30 Winchester cracked, and the bear lit out straight at us. “Again!” Clunk-clunk. Pow!

Chuck Connors’s character, The Rifleman,would have been proud. The bear veered away from us, piling up into the brush nearby. I’d seen aggressive behavior from bears before, but I had a hard time wrapping my head around this. Black bears are usually relatively lax, and I couldn’t believe these bears were being so persistently aggressive. Our trail camera photos and some fresh wounds indicated that the two bears had been fighting earlier that day, and we must have shown up just in time to surprise the larger boar while he was sleeping.

Read Next: Mississippi Hunter Kills a 146-Inch Buck Two Days After Her Husband Missed It

Not Out of The Woods Yet

We got the bears skinned, the meat cooled, and hoped we would have enough gas to make it back to the drum that we’d stashed on our way up. We were running on fumes when we reached our fuel stash, and we were eager to relieve the angst that being low on gas on a remote river in the middle of Alaska can create. We loaded what we’d left onto the boat and carried the extra gas to the back of the boat to be transferred into the boat’s fuel tank.

The bluebird skies and warm sunshine of early June made it hard to imagine the four feet of ice that locked up the river only a few weeks prior. I had to go see a man about a horse, so while I was doing my business, Rob slid a 15-gallon steel drum of gas next to the boat fuel tank and spun off the cap, carefully bleeding the pressure as he opened it. “This gas looks like it’s boiling,” he said, noting that fuel inside the drum was bubbling. It was hot from the sunshine, but not unusually hot, we thought.

He took the clear rubber Super Siphon hose, and as soon as he touched the copper end of the siphon to the gasoline all hell broke loose. I was back on the bow of the boat at this point and saw the gasoline erupt in a geyser. It sprayed nearly 20 feet into the air and didn’t stop. Rob instinctively put his hands over the bung hole of the drum, and it continued to spray for nearly 20 seconds, completely soaking Rob and the entire back of the boat.

Had there been a single spark, we would have both been blown to smithereens instantly. Fortunately, there wasn’t, and we weren’t. With some research, we later found out that it was a phenomenon called a Boiling Liquid Expanding Vapor Explosion. Despite bleeding pressure from the drum, the gasoline was above its boiling point, and the critical factors needed to produce that rare phenomenon lined up perfectly—or, in our case, imperfectly.

When the gas finally stopped spraying, Rob had to dump fuel out of his rubber boots, and approximately three gallons of gasoline had vaporized and blown out of the 15-gallon drum. Some would say that we were lucky to come out unscathed after our encounter with the bears, but now there was no doubt. We were lucky to survive that trip at all.