Some Kids Just Aren’t Meant to Be Hunters. But All Kids Should Get the Chance 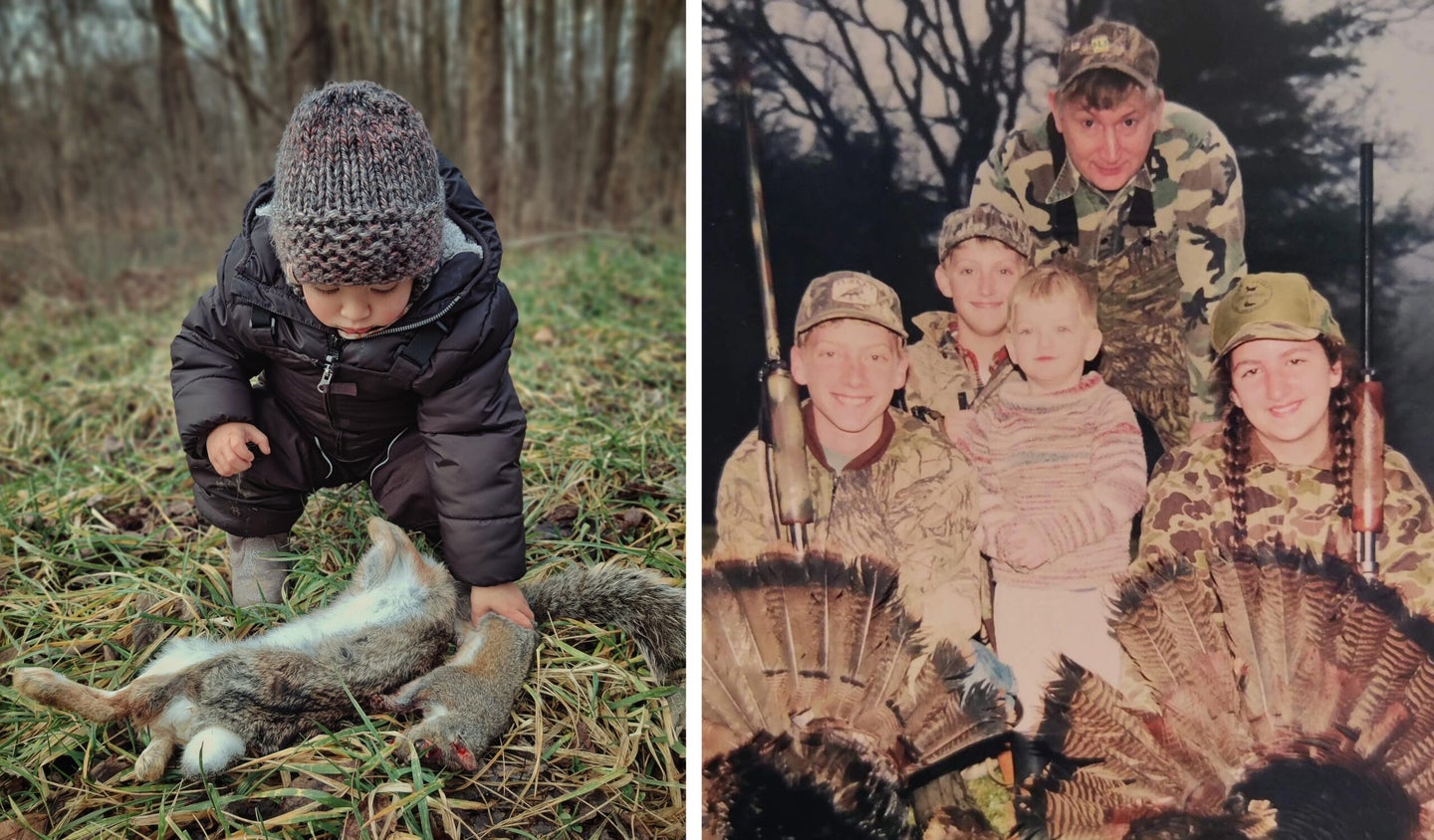 Introducing young children to hunting can sometimes be better than waiting until they're older; the author (far right) with some of her siblings and her dad. Beka Garris
SHARE

The first time I remember seeing a dead animal, I was about seven years old. My father was butchering a deer in the barn. The split carcass of the whitetail buck spun slowly on the gambrel as my dad sharpened his knife and prepared to skin and quarter it. I was fascinated by the whole process. I knew that this deer would be turned into hotdogs and sausage that would feed our family.

My reaction to butchering paralleled that of my five brothers, who never batted an eye. All three of my sisters, on the other hand, reacted poorly. When my 4-year-old sister saw the dead deer hanging from the ceiling, she vowed never to eat meat again and ran crying to her bedroom.

Read Next: How One Bowhunter’s Decision Is Shaping the Way Three Generations Hunt

I’m not sure if my sisters reacted that way because they were younger than me and hadn’t yet talked with our dad about hunting, as I had. Maybe they were just more squeamish, or their young personalities weren’t suited to hunting. Whatever the cause, Dad never pressured my sisters to hunt. He made sure they knew they were always welcome to join him in the woods, even if they didn’t want to shoot anything. He let them draw their own conclusions and make their own decisions on the subject. Years later, all three of my sisters took their hunter safety course, and each got their first deer.

When I became a parent, I knew that I wanted to introduce my daughter to hunting at an earlier age and make it as normal as a trip to the grocery store. In my experience, the older the child is when they witness an animal being shot or butchered, the greater the shock factor can be. Shielding your child from the realities of hunting can have more of a negative effect than you might think. A 12-year-old could be more troubled at seeing a dead animal for the first time than a 2-year-old would be. Where a 2-year-old is still learning the ways of the world, a 12-year-old has already established opinions and witnessed things that they may or not consider “normal” about food and life. Teaching it at a young age gives your child an advantage, and prevents a bigger shock later on. But even if that first introduction goes poorly, you can still shape their continued experiences with it, and whether they will ever want to pull the trigger or release an arrow themselves.

I have often thought about how I was introduced to hunting, and the death and butchering that’s a natural part of it. I know that if things had been slightly different, I may not have ever wanted to hunt. Because of that, my young daughter hunts with me. At the age of three, she has already accompanied me on many hunts and seen me shoot and butcher various wild animals. She enjoys fishing and eating what she catches. Recently we raised a batch of meat chickens to butcher for the freezer. My daughter enjoyed watching and feeding them while we raised them in the backyard, but my husband and I made sure she knew from the beginning that they weren’t pets. These chickens were food. When it came time to butcher, she didn’t bat an eye. Instead, she was focused on the process.

Many people were quick to criticize the fact that I let my three-year-old watch chickens be butchered, but I felt no qualms about letting her witness them getting “turned into meat.” She thinks that everyone lives like this. To her, it’s just as normal to get your own food from the woods or from the barnyard as it is for most people to go to the drive-thru.

I will never claim to be an expert on parenting, nor will I tell anyone else how to parent. There is no one perfect way to explain killing and butchering to a child, no matter their age. Every child is different. I’ve found it’s best to be honest and upfront with my own daughter about the whole process. I’ve taught her reverence and respect, and why we hunt.

I was 11 when I killed my first animal. It was mid-November, and I had just taken my first whitetail with my great grandfather’s double-barrel 20 gauge. The still-warm body of the deer sent steam into the chilly autumn air as my father drew a stripe of fresh blood onto my cheek. That ritual was done with reverence for the deer and to welcome me as a hunter. And I knew, even at 11 years old, that killing an animal was no small thing. I was sad and happy at the same time. I experienced reverence, and joy that came with finally getting my first deer. It’s something you can’t really explain until you’ve done it. And I’ve hunted every fall since.

Looking back on the experiences of my siblings, it’s clear to me that not everyone is cut out to be a hunter. There’s nothing wrong with someone choosing not to hunt. Everyone should have the right to make that choice no matter how young they are. But whether your child wants to hunt or not, educating them about hunting and why we do it is still crucial. While they may not choose to go out and kill their own meat, understanding the concept is something that can help shape their relationship to food, and create someone who is not an anti-hunter, but an ally to hunters.

After they took part in their first successful hunts, my two youngest sisters made the choice to give up hunting. They remain supportive of hunters while choosing not to hunt themselves. Although none of my brothers ever had qualms about hunting, a few also decided not to pursue hunting beyond childhood. My third sister, however—the one who ran to her room vowing to never eat meat—remains a passionate hunter and looks forward to introducing her own daughter to hunting in a few years.