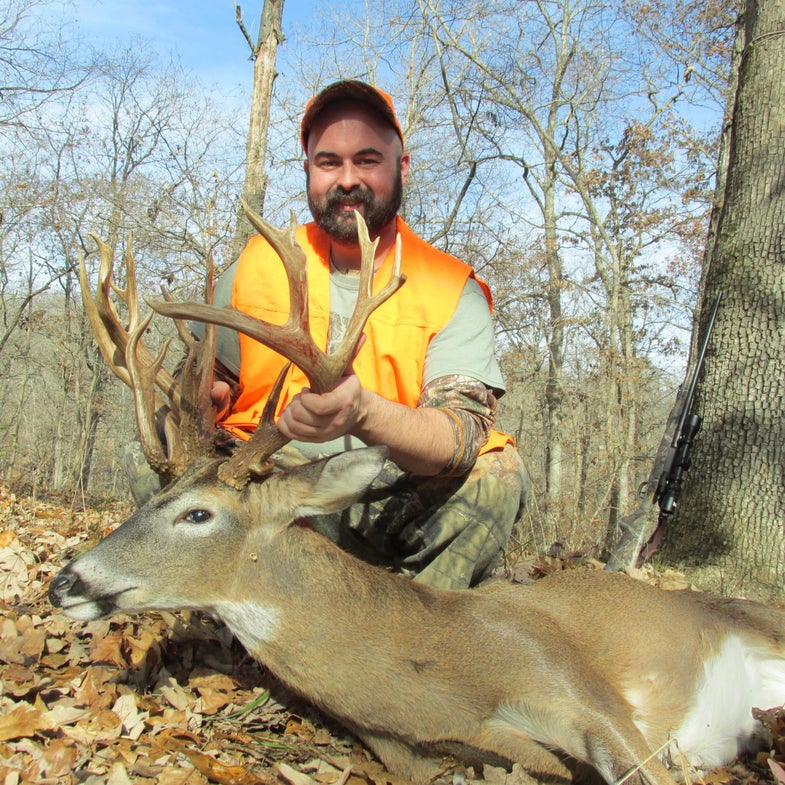 I’ve written plenty of articles about hunters who have taken trophy bucks all across the United States. But the tale of this Missouri hunter and his magnificent whitetail buck is extra special for me because this hunter, Tony Kalna III, is my son.

The 2021 deer season wasn’t looking very good at our Morgan County farm. Acorns are the staple deer food and this was the third consecutive year without a mast crop. Buck sign was minimal and trail camera pics revealed a few small bucks. Despite the grim outlook, we couldn’t wait for deer season.

We missed opening day of firearms season on Nov. 13, but made it to the woods the following day. Tony hunted his favorite stand, which is situated at the intersection of two ridges. It’s a hub for local deer travel. I hunted on the opposite side of the property. In two days we only saw three deer, but it had also been extremely windy.

Day three dawned with a beautiful sunrise and calm winds. It was a perfect morning for hunting. Tony III went back to his stand, and I hunted to the north from the ground. I had a good feeling that something was about to happen and at 9:18 a.m. I heard Tony’s 7mm-08 bark from his ridgetop stand.

According to Tony, he saw a deer rump protruding from behind a tree. When it stepped out, he could see that it was a shooter buck.

“I bleated twice to try to get it to stop, but it just kept walking,” Tony says. “I decided I had to take the shot before it disappeared into brush or over the hillside.”

I began making my way toward him to help track what he had shot. When I was nearing his stand I spotted the buck standing 65 yards away. I was shaking at the sight of the enormous buck and, before I could react, it slowly ran away.

I called Tony and told him I had just seen his buck and he rushed to meet me. We began following the blood trail and had only gone a short distance when Tony looked up and shouted, “There it is!”

Tony sprinted toward the downed deer like Usain Bolt. When he got to the fallen giant he yelled in disbelief, “I can’t believe it, look how huge it is!”

After a few minutes of exuberant celebration we finally took a minute to actually count a total of 25 antler points. The right antler sports 16-points with a 6 6/8-inch base and the left side has nine. The longest tine on the right side measures 11 inches and the longest on the left is 9 4/8-inches. We haven’t rough scored the whole rack, but our wildest guess is close to 200 inches.

“I normally don’t get excited about anything,” Tony says. “But I was overwhelmed with excitement when I found him and it still seems surreal.”

As a father, this hunt will be forever etched in my mind as one of the best days of my life. I am so grateful that God allowed me to share this special moment in time in the deer woods with my son.