Ryan Watkins shot the second buck, which scored close to 200 inches, on the final day of Kentucky's bow season 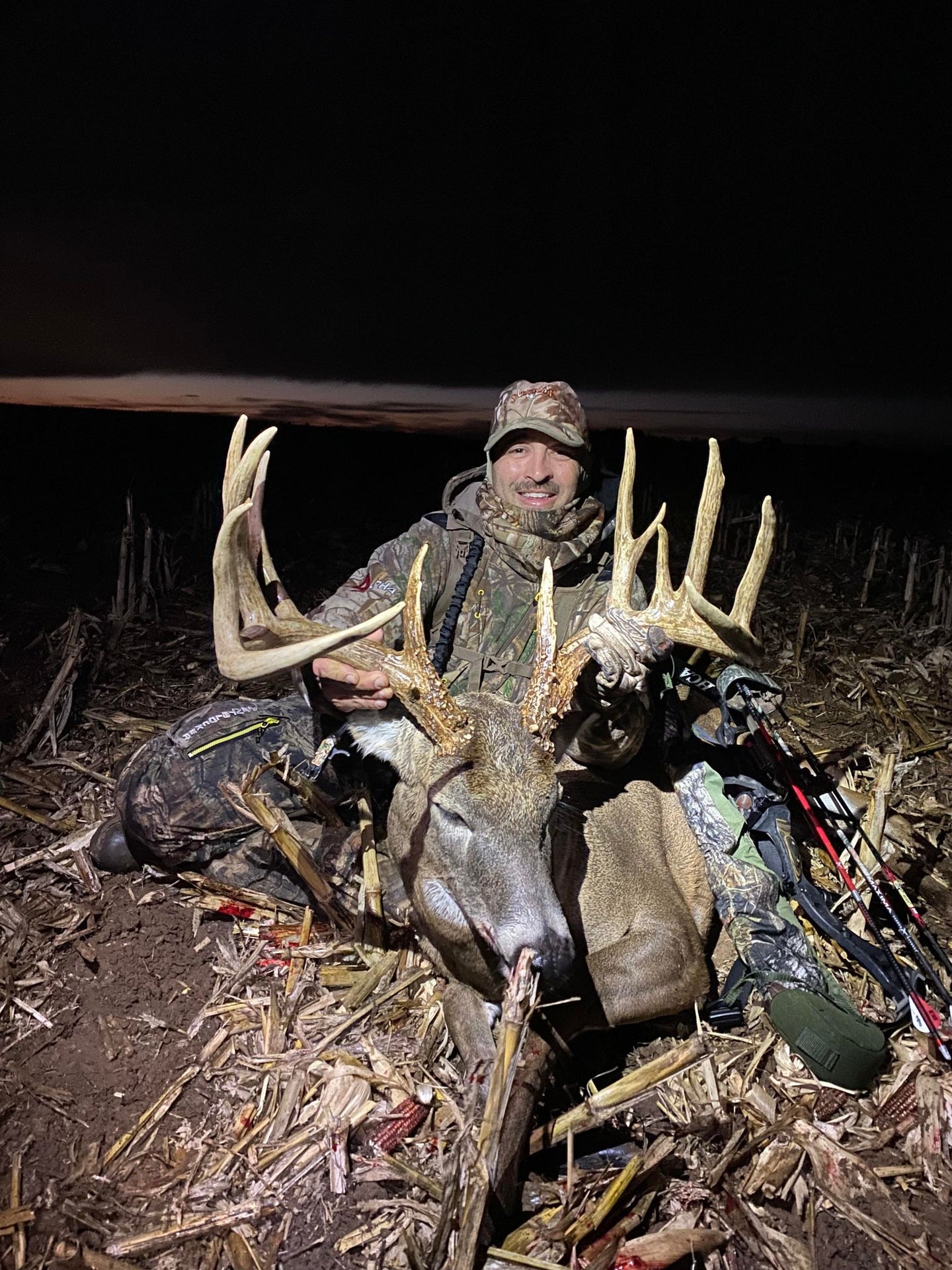 Ten days of hard, careful bowhunting produced a massive buck for Ryan Watkins, 39, of Logan County, Kentucky. He took the buck in the waning minutes of the state’s archery deer season on Nov. 12. It was just 10 days after his farm management and hunting pal Currier Gills took an equally huge buck just 200 yards from the treestand where Watkins connected on his 13-pointer.

The two bowhunters had targeted Watkins’ buck as their number one deer during the 2021 bow season. Except on Nov. 2, Gills climbed a tree and an equally great 13-pointer with double drop tines was too big to pass.

But Watkins continued hunting the target deer each day until Nov. 12.

“We had plenty of photos of my 13-pointer, and knew he was on our farms,” Watkins said. “In fact, we passed him several times last year, knowing he was young and still gonna grow. My buck put on at least 50-inches of antler mass from 2020 to this season.”

The row-crop farms Watkins hunts are in Todd County, next to Logan County where Watkins lives. The area is located south of Bowling Green and north of Nashville. The farm has lots of tillable acres, with fence rows, clumps of woods and some wetlands, offering deer choice bedding and feeding areas. Trail cameras monitor bucks and allow Watkins to only venture into prime hunting places when conditions are perfect.

“It’s taken a long time and a lot of effort to get our farms and hunting tactics down to where we have them now,” says Watkins. “But it’s all come together this year.”

Watkins hunted his buck through the bow season, being careful not to push and spook deer, and only hunting places with ideal wind and weather conditions.

“I saw my buck a few times hunting, but always from long range, trying to be careful not to be too intrusive and spook him,” Watkins said. “I even watched him breed several does. I often didn’t hunt the best places because the weather or wind was bad, and I still had plenty of time to bowhunt him. It’s hard to do that, and takes a lot of discipline not to go charging in at times to hunt a hot spot.”

The last day of the Kentucky bow season had a weather front move in, with lots of wind and rain, so Watkins didn’t hunt that morning, hoping conditions would improve fin the afternoon.

“About mid-day the rain quit and temperatures dropped fast, and I figured that afternoon would be my last chance with my bow for him, so I went in with my climbing stand and picked a tree I’d never hunted before,” Watkins said. “It was a natural funnel between his bedding and feeding area, and as it turned out it was only 200 yards from where Gill shot his big buck 10 days previously.”

The wind was blowing strong, and Watkins only saw a couple small bucks from his stand. But at dusk, the wind died, and he spotted the buck suddenly step out in a field 40 yards away.

“I couldn’t see far in the field because I just had an open shooting lane to watch through the trees,” Watkins recalls. “Suddenly he was there at 40 yards in the field, which is far, but I started to draw. As I pulled my bow, the buck walked straight to me, turning broadside at 12 yards offering a perfect shot behind the shoulder.”

His 70-pound High Country bow delivered a 100-grain Dead Ringer expandable broadhead above the buck’s heart and through both lungs. The deer traveled only 100 yards and Watkins saw him fall.

The 4.5-year-old 13-point buck was not weighed, but sports a 10-point main frame with split brow tines and kickers, scoring 196 5/8s inches.

“When I watched him fall, I was ecstatic, it was incredible,” said Watkins. “I’ve taken a lot of bucks, including a 150-incher last year. But this buck is my biggest, and the hunt for him was special.”