5 Things I Learned About Calling Deer from Expert Hunters

No secrets here: just practical strategies from some of the best deer hunters that can improve your calling 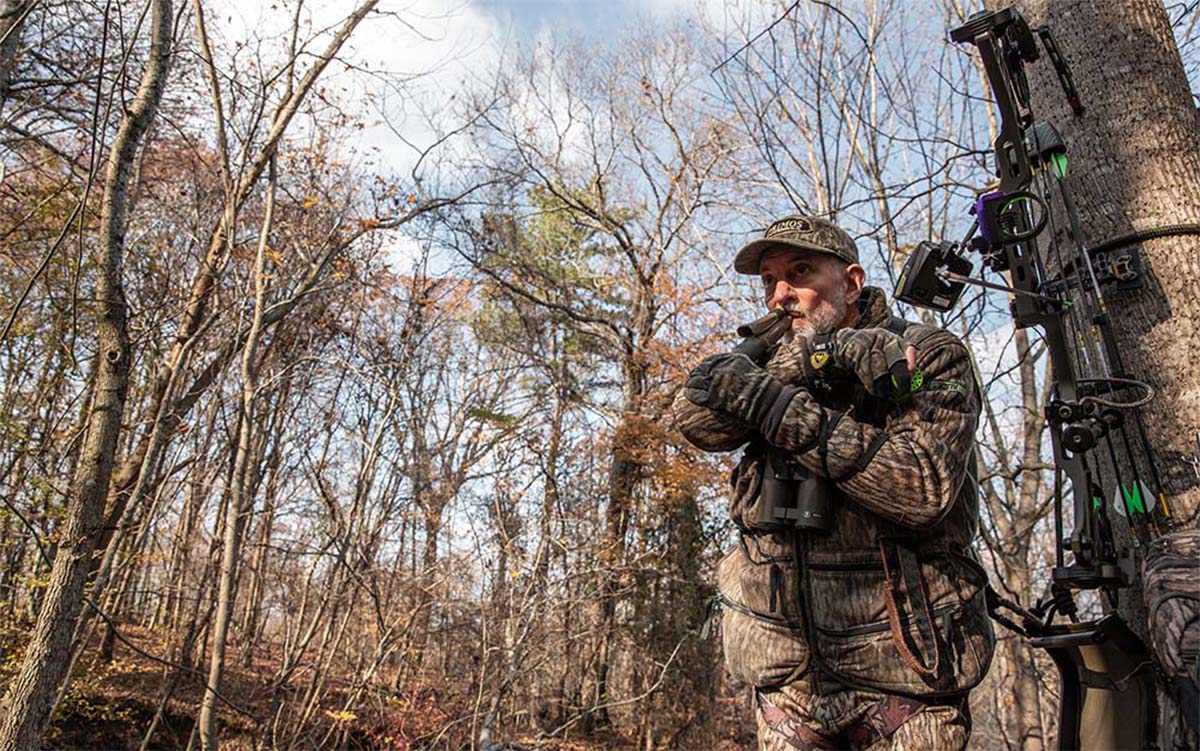 Calling deer requires just as much strategy as hunting them. Primos Hunting
SHARE

I hate to break it to you, but when it comes to calling deer, there are no magic tricks. Most unsuccessful or uneventful calling probably suffers for the same reason most hunts do: they lack necessary strategy. Hunters often call at random times in random conditions, hoping that a buck will come strolling into range. Rarely do random tactics work out in the deer woods, and it’s no different with deer calls. Sure, every now and then deer slip up—even mature ones—but consistent success requires a strategic approach, and even that doesn’t promise anything.

I originally interviewed Zach Ferenbaugh, Dan Infalt, Will Primos, and Mark Drury to find out about their go-to deer calls, but I learned even more about how they approach calling. They use a wide range of hunting tactics, by stalking deer in their beds on pressured public land to shooting bucks from elevated blinds on well-managed private properties. So no matter where you hunt, their calling tips will come in handy.

1. Your Setup Is Everything

Having the right wind doesn’t mean you’re in the clear on your setup. Whether you’re blind calling or grunting to a buck that’s just out of range, he’ll usually try to circle downwind. And when he does, it’s all over. So use terrain features, like a body of water or steep bluffs or banks, to force the deer to travel a certain way. Like humans, deer prefer the path of least resistance, and these terrain features can push the deer into range if you set up correctly.

If you don’t have these major terrain features at your disposal, use the wind and thermals to your advantage. This requires a bit more knowledge and strategy about the spot you’re hunting. For instance, if you hunt areas with ridge systems, a buck can easily circle to get downwind of your hide. But shifting thermals—the ruin of many hunters—can help in this case. With the right setup, they can pull your scent away from a buck’s travel route, letting him think he has the wind while you still have the advantage. Of course, you’ll have to consider things like the prevailing wind, time of day, the general bedding area, and buck travel routes. That’s a lot of moving pieces. But if you play them just right, you might have shot at fooling a buck’s nose.

If you lug your climbing stand through the woods, clang and bang your way up a tree, and expect a mature buck to come running to your grunts or rattles five minutes later, plan for an uneventful sit.

If other hunters can pick apart your calling in the woods, you can bet you’re not convincing the deer either. Painting a realistic scenario is vital for successful calling and is something each expert stressed. Deer make a ton of noise when they’re doing deer things. Adding some of those noises to your calling sequences creates that realism.

Hunting from the ground, however, might be the best way to create a hyper realistic scenario. When you rattle, don’t be afraid to thrash through the leaves or break branches. If you’re hesitant to do this, just watch a video of two bucks fighting. There’s nothing quiet about it.

You can even add other elements of realism, like The Hunting Public’s Zach Ferenbaugh suggests, by mimicking the sounds of a deer making a scrape. Like this tactic, the key isn’t to make random noise in the woods, but to sound like a deer when you’re doing it. You want to grab a buck’s interest, not put him on high alert.

There are plenty of videos and how-tos about grunting and rattling, and those are helpful—to an extent. The best way to learn how to call comes from listening to deer in the field. The experts I interviewed spend a ton of time in the woods every year. Whenever they spoke about calling or creating a sequence, they all referenced numerous instances of deer making those same sounds, and how they try to imitate those sounds. Spend more time in your treestand (or on the ground) and you’ll learn more about calling—and deer, for that matter.

This isn’t a slight against any deer call manufacturers. If anything, it’s a testament to the best deer calls on the market. The reality is, most of them are pretty much the same. All the experts I interviewed use different calls. Other than appearances, these calls function the same way, and they make similar—if not the same—sounds. It’s less about which call you use and more about how you use it. If you were to walk into your local sporting goods store and grab a grunt call at random, chances are you’d have just as much success with that call as any other. But if you’re not setting up with the correct conditions or adding realism, it doesn’t matter what call you use. You’re not setting yourself up for success.

If you don’t believe in your calling, why would the deer? Hesitation might be the one thing that dooms your calling from the get-go. Deer need convincing to come investigate your calls. Random or soft grunts probably won’t make the deer budge. Heck, they might not even hear you if it’s a windy day. When you call, especially if you’re calling blind, commit to it. If you’re confident in your setup, then you should be confident that deer are either bedded nearby or will eventually travel past you. With that in mind, call with the expectation that deer can hear you, and you’ll put more effort and realism into your calls.

If you’re still searching for the one call to rule them all, good luck. Like anything, calling deer requires persistence and effort. Luckily, there’s much to learn from hunters who find consistent success calling deer season after season. Incorporate these strategies into your calling next time you’re in the stand, and who knows? You might surprise yourself—and the deer.